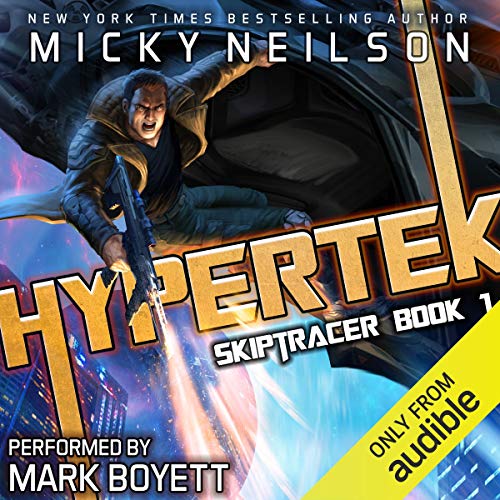 Business has never been deadlier....

Blake Harley is a Skiptracer - a kind of bounty hunter - on the faraway construct world of Concourse Prime. Hired by a corporate client to secure an overdue product, he'll make some quick cryp and be on to the next job. Easy.

Except, this job is anything but simple. The product is tied to the immensely powerful and ultra-secret Hypertek, leaving Blake with a choice: be a good soldier, or refuse to help MagnaCorp become the most powerful entity in the system.

Another problem: everyone else in Concourse Prime is gunning for the product as well, from the demi-humans ruling its seedy underbelly to the CEOs inhabiting its gleaming superscrapers - people far more sinister than Hypertek.

Blake fights to survive while he wrestles with his decision. In the end, it’s just one big threat that could plunge humanity into an all-out interstellar conflict. What's the big deal?

This was a treat. Great story. Great world building and a giant setup for the series to take off. Boyett is a master of performance and it’s no wonder the author is an NYT Bestseller. Bravo!

Unfortunately, the book wasn't for me!

Boy... I'm sorry to say, this book clearly wasn't written for me! I expected a down-on-his-luck kinda PI (in this case, a Skip Tracer). Ya' know... snarky with a bit of a noir style to it. What I got was a protagonist, Blake Harley, whom I simply couldn't stand! He's a man whose moral compass spun about like a drunken sailor... he's got soooooo many regrets, and each of those regrets was accompanied by a flashback... and of course, he seeks solace in a bottle! The best character in the whole story was an AI that happened to reside in Blake's car! The storyline might actually be about Blake's redemption... but I'm not willing to stick around for book 2 in order to find out!
I found myself bored to tears throughout the first half of the book, but there wasn't anything so egregious as to piss me off, and make me toss the book aside. So, I continued to soldier on... hoping things would improve, which sadly, was not what happened! Don't get me wrong there's plenty of action, but I couldn't connect with any of it.
I found Mark Boyett's voice performance as narrator, to be the highlight to this otherwise abysmal book!

While this may not be the most poorly conceived and written book I have picked up recently it is certainly in the running. After a few chapters I had to give up. Not sure what the author had in mind. Was this intended as a tongue-in-cheek noir send-up , a Cyber Punk action thriller, a hard core sy-fi story or what? The main character is at best a cartoon. There is no coherent plot or story. Our bumbling protagonist just wanders from one unrealistic encounter to the next ridiculous situation.
I feel bad for the reader being associated with this lame attempt at a novel. I selected the book based on the reviews and the reader. Mark Boyett is a master of his craft, but no one could save this pathetic attempt at an entertaining story. After all no matter how hard you try , you can't polish a turd.
I went back and reread the other reviews for this book. I can only conclude that they were written by the friends and family of the author or they are reviews of a totally different book.
They say everyone has a novel in them. Maybe, but some people should probably keep it to themselves

really good book. the narrator did a great job. I loved the gravity glove. good intro to a series.

Can’t wait for the next one

I’m posting this with 3 weeks to go till bk 2 come out in audio and I can’t wait.
The book starts a tiny bit slow but is going well by the end of chapter 2 the 2 interleaving timelines culminate perfectly for the end of the book
The tight character focus is good and left me eager for more world building in the future books

This story is so good. I’m half done with book 3 as of this writing. The protagonist is awesome in that he is relatable. As a series, the story has all the elements that make a sci fi story good. If you like detective books, sci fi and action adventure you will not be disappointed.

Mark Boyett is awesome as always. He may be my favorite narrator because of his cadence and range of characters.

The story tripped along at a quick pace.
Concise creative writting, vivid imagery, action and droll humor throughout.
Mark Boyetts narration was very good.
Thank you to Aethon Books who provided me this book free of charge at my reques

A must read great sci fi

Hypertek is a thrilling and inspired Masterpiece.

Hypertek is set in a Dystopian future, in which there is a very definite separation between the rich, who live and work in a kind of luxury on Concourse Prime, working for one of the ‘Mega-Corps’, and then the rest of the population that just wishes that they could be there.
Amongst this population is Blake Harley, a Skiptracer. A Skiptracer is a ‘Debt collection and Fugitive recovery specialist’, in Blake’s own words, tracks bounties, which can be people, objects, defunct contracts, pretty much whatever if the Skiptracer is right. They are part Private Detective, part Bounty Hunter.
Blake Harley is just one of those characters you love immediately. If they make a movie out this, you just know that Bruce Willis (or maybe in his younger days – a ‘Blade Runner style Harrison Ford’), would be playing the role. Blake is a down on his luck cop, who seems to have a knack for getting himself into situations that just go from bad to worse.
It hasn’t always been this way though, and that makes up a good chunk of this story, as the book is divided into 2 parts, a flashback sequence to a former point in Harley’s life, and then ‘Now’ and how those events of before are intertwined with those of today.
It makes for a captivating and exhilarating ride, as you are thrown from action scene to action scene, and move from past to present, learning more and more of Harley’s past, why he is so messed up today, why he has such a complex relationship with an individual called Rhyden (as well as some other people in both past and present), and how he got a prosthetic leg.
Hypertek is not just a book of Harley chasing the Grinch through Christmas Past, it is a complex web of intrigue, political games, and a powerful, emotional past that saw several lives destroyed, and mistakes made.
Harley in the future is trapped by the demons of the past, and it is in this future, he is given a job to go and retrieve some sensitive information for one of the ‘MegaCorps’ but under the table as such, they do not want anyone to know, and in return, he gets 20,000 credits, 50% up front, which is a lot to him.
Of course, (without getting to involved as I don’t want to give away things and ruin all the fun for you!!), actually kicks off into hyperdrive at this point, as Harley starts to uncover things that are not right, and it is from here that it becomes a full on thriller, mystery, and his past comes back to haunt him, especially in the case of Rhyden.
Neilson has put together a full-on, action packed thriller, that is part Mystery, part Thriller, part Sci-Fi, bits of Political Intrigue, Corporate Espionage, , a serious Morale Dilemma for our Main Character and it has so many twists and turns, within twists and turns, that just when you think you have something worked out, you are suddenly… Well, I can’t really tell you, you aren’t authorised until you have read that section of the book (MegaCorp Rules, sorry).
Neilson has gone to great length to craft two stories, in two different timelines, with the same characters (and a few different), that are intricately linked, and as you read the story in the past, you start to understand the motives of those in the future, and also how it is going to impact on the future. The really interesting part is, that some of the characters don’t know either, and you get to enjoy the journey together, with some amazing consequences!!
This is a powerful story, emotive, but brilliant, and Neilson has shown that he is capable of writing not just complex storylines, but complex characters to weave through the stories, taking you on a breathtaking ride.
There are so many genres involved in this story, it doesn’t matter what you like, you will get something out of this.
I have listened to a lot of stories that have been narrated by Mark Boyett, and it never ceases to astound me just how good he is. He has a rich, clear and concise voice that is easy to understand so you never miss a word. Better than that, Mark is an experienced Narrator, and can easily bring his characters to life, with the emotion in his voice, creating so much passion, so you know exactly what the characters are feeling without being told. He does such a wonderful range of voices to, both male and female, that are very distinctive, and you can easily pick out the characters, you don’t need to be told who is speaking, you can just tell. Boyett’s Narration is exceptional, and he is one of those Narrators that if you see his name on the Audiobook, you buy it, just because he is the Narrator. Outstanding!!

Loved it and the narrator was a very good story teller and I felt like I was part of the story.