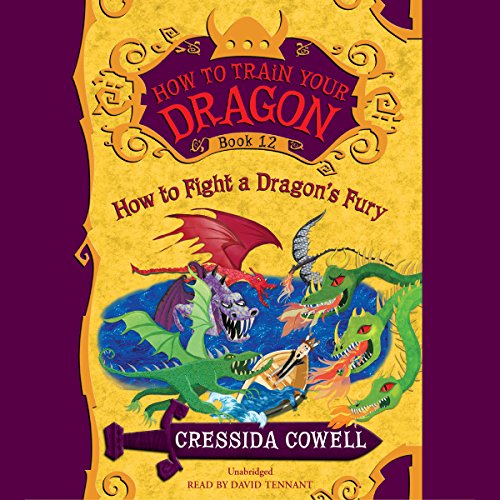 Book 12 is the epic finale to the New York Times best-selling How to Train Your Dragon series!

The Doomsday of Yule has arrived, and the future of dragonkind lies in the hands of one boy with nothing to show but everything to fight for. Hiccup's quest is clear...but can he end the rebellion? Can he prove himself to be king? Can he save the dragons? The stakes have never been higher, as the very fate of the Viking world hangs in the balance!

How to Fight a Dragon's Furyに寄せられたリスナーの声

David Tennant does a superb job of relating Hiccup's tale from beginning to end. Cressida Cowell's imagination is superlative with the most inventive and addicting take I've heard or read in a long time! The whole family got hooked from the first book.

NOOOOO, say it's not over.

I'm so sad, that this series is over. I love it so much that I have already listened to it twice. I recommend this series to all, kids and adults alike. It is so fun, crazy and full of adventure. After I relistened to the series again I realize how clever Cressida Crowell is and how she ties the storyline together and makes the clues blend in nicely. In a way that it reminded me of how well JK Rowlings did it in the Harry Potter series. I hope there are more books to come from Cressida Crowell because I will be for sure trying them. I can only say good things about the narrator. I love him and wish that he did more audiobooks he really helps make the characters come to life and recognizable just by the way they talk.

I have bought and listened to the entire series, DavidT. Is the best narrator ever!

Another brilliant and much awaited How to Train Your Dragon book. As always the story and the performance were brilliant. The story pulls you in and keeps you on the edge of your seat. I found myself unable to stop listening because I wanted to know what happened next. I'm quite sad that this is the last book, but with 12 books total there is plenty to re-listen to and still enjoy. David Tennant gave another fantastic and lively performance that really brings the characters and the story to life.

I'm sad its over.

This book series has been a great adventure from the beguining to the end. The movies really do no justice to these amazing books. I was at first very skeptical but later found myself falling in love with the characters. I'm very saddened that it's over. I hope you have enjoyed it as much as I have.

makes me cry every time! such an amazing series . it will always keep me on edge.

this is a wonderful story and I had alot of fun listening to it.

I love this series!

These are the best books! They made me want to laugh and cry at the same time!