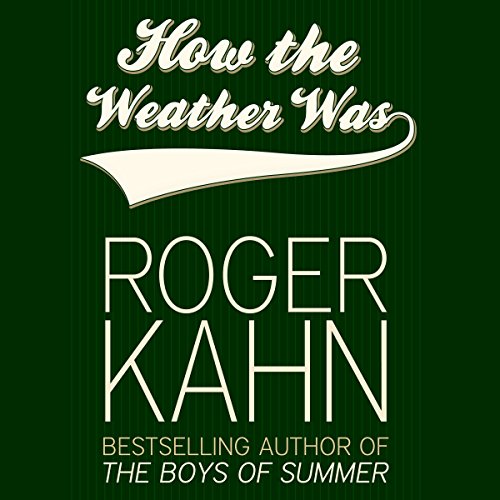 Robert Frost, Claudio Arrau, John Lardner, Jackie Robinson, Babe Ruth, Willie Mays, Leo Durocher, Bobby Thomson, Al Rosen, Jascha Heifetz, and other heroic figures in their years of glory, in their times of trial. This is a book about people to be remembered, and what it was like in America at a very special time.
©1973 Roger Khan (P)2012 Audible, Inc.

Trenchant profiles from baseball and beyond

I've loved this book since first reading it in the mid-1970s. Roger Kahn grew from a wet-behind-the-ears sports journalist, covering the Brooklyn Dodgers in their glory years, to a masterful profiler of human strength and weakness. His breakthrough book, The Boys of Summer (1972), follows the Dodgers stars into middle age. In How the Weather Was (1973) Kahn profiles other baseball figures whose fascination derives from their outsized personalities (Babe Ruth, Leo Durocher), outsized ability (Ruth, Willie Mays), central role in an outsized event (Bobby Thomson), or outsized courage breaking barriers of color and religious heritage (Jack Robinson, Mays, Al Rosen). Kahn goes beyond baseball with portraits of fellow journalist and drinking buddy John Lardner, pianist Claudio Arrau, violinist Jascha Heifetz, and poet Robert Frost. These chapters focus on how artists cope with both the public and the inner expectations that inevitably accompany extraordinary talent and accomplishment, especially as they age. He adds a compelling narrative of the police riot after the SDS takeover of a building at Columbia University and a nonfiction murder mystery. Simply, Kahn can write. Unfortunately, Bryan Bendle does not read with the same fluidity. His choppy narration obscures the rhythm of the author's sentences, and pronunciation errors sometimes suggest poor familiarity with subject matter. Kahn's words win out, but another narrator easily might have made this a 5-star offering.