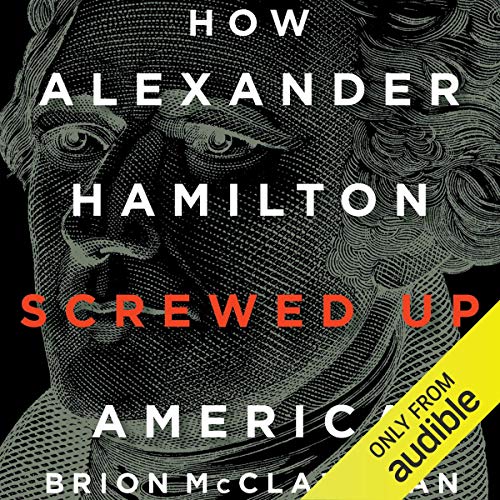 How Alexander Hamilton Screwed Up America

He is the star of a hit Broadway musical, the face on the 10-dollar bill, and a central figure among the founding fathers. But do you really know Alexander Hamilton?

Rather than lionize Hamilton, Americans should carefully consider his most significant and ultimately detrimental contribution to modern society: the shredding of the United States Constitution.

Connecting the dots between Hamilton's invention of implied powers in 1791 to transgender bathrooms and same-sex marriage two centuries later, Brion McClanahan shows the origins of our modern federal leviathan.

How Alexander Hamilton Screwed Up Americaに寄せられたリスナーの声

Let me be fully understood; I am very grateful to Audible for creating this audiobook. With that said, I found the preponderance of its content, which was created by Brion McClanahan to be similar too any number of "neo-conservative" treatises. This is not too say that Mr. McClanahan isn't a capable scholar, but this relates rather to his choice as to how the material is presented; i.e. the material is accurate, but presented in a "rough & ready" fashion.

Thomas Rosenfeld does his best in reading the text, but he sounds quite inexperienced. Overall, as it relates to this audiobook, perhaps my expectations were too high. Nevertheless, I am appreciative for it having been created.

very well narrated and written. very insightful. awesome! i would reccomend to all that this be listened to or read.

Exposing the Snake in the Grass

Dr. McClanahan's exposition of how and by whom the American general government began its downhill slide to what it is today is an absolutely riveting listen. Especially powerful is the book in conjunction with the companion course offered through McClanahan Academy. Hamilton set the precedent that would be embraced, followed, and magnified by one president after another, leading to today's imperial presidency and the general government's almost total dominion over nearly every facet and minutiae of an individual's life.

Best Historian in the Businesz

Brion McClanahan is an absolutely fantastic historian. He dares go where most modern scholars are too afraid to go and tells the cold hard truth regarding the founding period and the War for Southern Independence.

The reading by Rosenfeld is often lacking, but the content by the author is riveting, engaging, thorough, and damning of Hamilton and his followers. McClanahan does an excellent job of explaining how we arrived at this place in our history, and identifies ideas and habits we should reject in order to restore our federal union.

I highly recommend this book for all.

Not in the 3x5 card of allowable opinion

The true United States was supposed to be a diverse group of sovereign states answerable to their respective diverse populations. Nationalism has not only destroyed that state sovereignty, but also the liberties of its citizens. With an out-of-control swamp of corruption in DC using divide and conquer tactics to take revenge on the disenfranchised every election cycle, the outcome of nationalism is clear: We traded one tyrant 3,000 miles away for 3,000 tyrants one mile away. The Constitution has been unable to prevent the perversions foisted upon it.