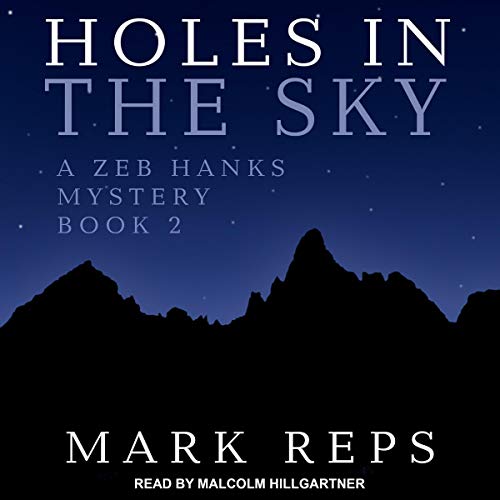 Who owns what is traditionally considered sacred? Can the Catholic Church legally conspire with the federal government to steal the most sacrosanct of Native American holy places? Holes in the Sky, the second in the series Zeb Hanks: Small Town Sheriff with Big Time Troubles, explores these questions in a clash of cultures mixed with mysterious deaths.

In the middle of the night a priest sits in a rocking chair on a dip in the highway at the foot of Mount Graham. His fate is death when the driver of a semi-truck barreling down the road on an overnight haul sends him to his maker. Sheriff Zeb Hanks is certain that Father McNamara's death is a suicide. Mounting evidence begins to tell him otherwise. Former sheriff, Jake Dablo, in his role as county commissioner, senses that potentially unscrupulous land deals are occurring on Mount Graham. Sheriff Hanks reluctantly agrees to help. Eskadi Black Robes, tribal chairman of the San Carlos Reservation, discovers that these properties are among the holiest places in Apache religion. Eskadi is certain they are being foreclosed upon and confiscated by the federal government.

On the San Carlos Reservation a tribal gathering is called by medicine man Jimmy Song Bird. Song Bird has had a vision that great harm will come to the Apache people if they fail to pay heed to the Gods that inhabit Mount Graham. His vision is interpreted as a call for action. Meanwhile, Sheriff Hanks and his team must unravel the complex weave of sacred holy places, land rights, and the ever increasing body count, which means big time trouble for the small town sheriff.

Listening to this book and look forward to reafing/listening to others written by Marks Reps.