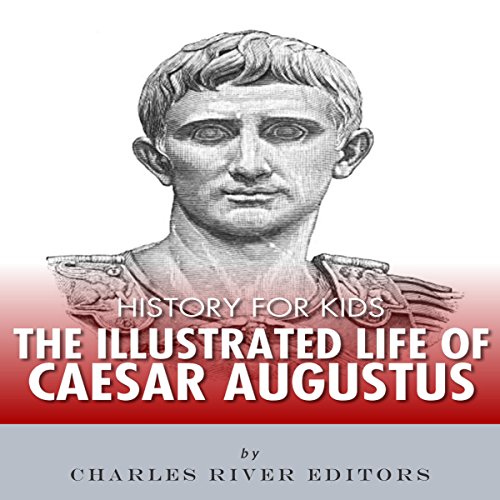 History for Kids: The Illustrated Life of Caesar Augustus

"Young men, pay heed to an old man, whom old men harkened when he was still young." - Augustus

In Charles River Editors’ History for Kids series, your children can learn about history’s most important people and events in an easy, entertaining, and educational way. This concise but comprehensive audiobook will keep your kid’s attention all the way to the end.

The importance of Gaius Julius Caesar Augustus (or as he was known from birth, Gaius Octavius “Octavian” Thurinus) to the course of Western history is hard to overstate. His life, his rise to power, his political, social, and military achievements, all laid the foundations for the creation of an empire which would endure for almost five centuries, and whose traditions, laws, architecture, and art continue to influence much of Europe and the world today.

Octavian was the first true Roman Emperor, and the first man since the Etruscan Tarquins, five centuries earlier, to establish a successful hereditary ruling dynasty in what had been a proud Republic for over half a millennium. He was a canny strategist, an excellent orator, a fine writer, a generous patron of the arts, and an enthusiastic promoter of public works, but above all he was a master politician. Octavian’s great-uncle (and adoptive father) Julius Caesar was a great general, his rival, Mark Antony, a great soldier, but as a politician, Octavian outmatched them all.

Certainly, like all men, Octavian had his defects. Like many of the most successful politicians, he could connive, plot, and prevaricate with the best of them, and he made full use of the emotional pull that his late beloved great-uncle had over the legions during the course of his rise to power. His justice was also famously heavy-handed, and he was not known for his mercy towards those he defeated in battle or marginalized political opponents. Yet despite all this, he still stands in bronze on Rome’s Via dei Fori Imperiali to this day, along with the likes of Caesar, Hadrian, Trajan and Marcus Aurelius, and he is forever immortalized in all Western calendars as the patron of the month of August, which was dedicated to him when he was deified, following his death, as Divus Augustus.

Like his adoptive father before him, Octavian is one of those figures whom it is difficult to know exactly what to make of, because he appears, even at a distance, to be larger than life. Yet the amount of personal correspondence and contemporary writings penned by Octavian himself, as well as his friends and associates (and rivals), is such that, when we analyze it all together, a clear picture of the man behind the bronze statue begins to emerge - the man who found Rome a city of bricks, but left her behind a city of marble.

History for Kids: The Illustrated Life of Caesar Augustus provides an entertaining look at the life and legacy of Rome’s first emperor.