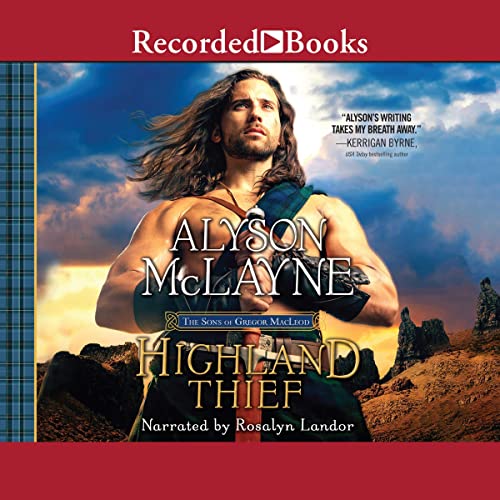 The final installment in an exciting series from author Alyson McLayne, featuring fierce, loyal Scottish Highlanders and the beautiful lasses who steal their hearts.

No one ever accused Kerr Macalister of being a nice man. Everyone would agree, however, that when he makes up his mind about something, no one will change it. Which is why everyone knows Isobel MacKinnon will end up his wife.

Isobel spent most of her childhood in love with tall, dark, and deadly Kerr. It wasn't until she was 15 and failed to entice Kerr into kissing her that things turned sour. Now, Kerr is the one trying to entice her. But Isobel knows how to hold a grudge and won't be swayed unless he proves his love. So she tricks him into believing she's eloping with another man. Kerr responds by kidnapping her to a remote cabin in the Highlands where both love and danger lurk....

Contributor bio(s): Alyson McLayne is a mom of twins and an award-winning writer of contemporary, historical, and paranormal romance. She has been nominated for several Romance Writers of America contests, including The Golden Heart, The Golden Pen, The Orange Rose, Great Expectations, The Molly's, and The Winter Rose. She lives in Vancouver, Canada. Visit her at alysonmclayne.com, facebook.com/AlysonMcLayne on Facebook, or @AlysonMcLayne on Twitter.

I have LOVED this entire series, but this book was SO disappointing. Kier deserved so much better than this childish, spoiled brat. The series has been about struggle and survival. There is a huge enemy plotting against the entire group and she decides to "play a trick" like a 12 year old. I simply wanted to smack her the entire book and tell Kier to find someone nore deserving and leave the little snot on her own.

definitely the best one

lots of character growth. I grew to love Issie. guy voices are a little weird.

A lot more than lose ends

In this final book of the Son’s series many ongoing conflicts are resolved, but the new ones are more fun. The stranded together scenario works well here, and we get to see both characters grow up. Caer learns to see Izzie through a new lens and sees the flaws in his treatment of her as well as the repercussions of that treatment. She sees his inherent goodness even though she has painted him the villain for years. When you strip away the resentments and misunderstandings these two witty and lusty highlanders bring their courtship and the series to a satisfying end.

I loved the whole series

The humor was awesome I found myself laughing out loud. Is the series going to keep going?

This author is very talented and I have truely enjoyed the books in this series. However, this grand finale was not so grand. The ending seemed rushed and not fulfilling. In all the other books the others were there to help. They came together to support each other. Not in this one. New and interesting characters were introduced but then dropped. I was let down by the way it was concluded. i will keep rereading the others in this series and might try the printed version of this one to see if it stands up better but don't have much hope that it will.