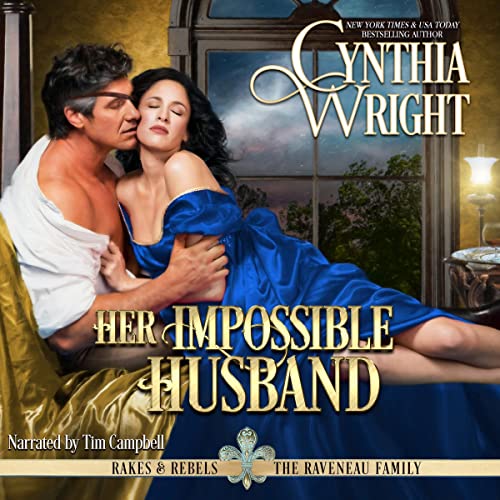 He was impossible! Yet utterly irresistible...

Renowned as a bold corsair and seducer of women, Justin St. Briac has spent the last decade as a married man. He adores his wife, Mouette, but as he ages, he chafes against the constraints of domestication and longs for another reckless adventure on the high seas.

Mouette Raveneau’s life among the London ton was in tatters when she fled to Cornwall and married Justin. Now, years later, she has an opportunity to return to society and repair her broken reputation. For the sake of her adult son, Charles, she agrees...but what of her untamable pirate husband?

If the volatile Justin does accompany Mouette to London, she fears he will prove incapable of conforming to the haut ton’s rigid code of conduct. And when Mouette receives assistance from a caring, respectable nobleman, Justin burns to challenge his rival to a duel to the death.

As marriage becomes the most reckless adventure of all, will these two lovers dare to join forces...or turn their backs and walk away for good?

Her Impossible Husband, by Cynthia Wright, is a sequel to her book His Make-Believe Bride. Bought to life through the wonderful narration of Tim Campbell it continues the love story of Mouette and Justin St. Briac some ten years after HMBB ends. Justin is experiencing an inner turmoil as he sees his old friends getting older, some dying, all retiring from their days of pirating. Not wanting to admit his feelings to his wife, his reticence starts the chain of events that becomes this story. I loved this book! I actually loved it even more than the original. The author's wonderful descriptions and scene setting captured my attention from the first page and I found myself thoroughly charmed once again. Add to that the dreamy narration from Tim Campbell and I most definitely highly recommend this audiobook!

What a fantastic book, Cynthia Wright!

This story grabs your heart and doesn't let go!
Justin is a Frenchmen who led the life of
a Pirate, Women and adventure. He met
Mouette at a wedding years earlier, they meet
again years later and marry. You don't want
to miss a minute of the obstacles that happen
to this couple. I loved how their son, Anthony
gets involved to help his parents. Timothy
Campbell, thank you for bringing this book
to life with your fabulous narration.
This is a book I will listen to over and
over!

After the Happily Ever After

What happens 10 years after the happily ever after? When you are Justin St. Briac, you are not quite ready to come to terms to being nearly <gasp> sixty. You still adore your wife, but you can’t believe your children no longer idolize you as they used to. There is still adventure waiting around the corner, non? Justin has become what is often called a silver fox. An older hero who’s still “got it.” Justin puts up the good fight against his fear of aging and becoming settled. He’s still a corsair, is he not? But he soon realizes that some things do change and going forward can be just as exciting as reliving the past.

Mouette Raveneau St. Briac has a chance to restore her reputation in London and help her son. But will Justin be willing to join her to help? Or will his desire for adventure put him at cross-purposes with his lovely wife? Going back to London does not provide the satisfaction that Mouette had hoped. And she soon discovers that things were not always what they seemed.

HER IMPOSSIBLE HUSBAND can stand alone, but it becomes so much richer when you know the background that helped shaped the characters and you have greater satisfaction watching their growth. There are threads of the story that has appeared in several previous books, including THE SECRET OF LOVE, SURRENDER THE STARS, and of course, HIS MAKE-BELIEVE BRIDE. These threads include a missing painting and more background on Mouette’s first marriage. And a Raveneau book would not be complete without a visit from the couple that started it all, André and Devon, from SILVER STORM. (Who am I kidding, you will want to read all of the Rakes and Rebels: Raveneau books. Do it.)

I loved the science cameos, including Mary Anning and Charles Darwin (off-stage). And as always, there is a strong sense of time and place when she describes picturesque Cornwall and all of her descriptions.

I very much enjoyed revisiting Justin and Mouette to see how they have gotten along over the years. It was fun to see the next generation, as well. Can’t wait to see if, perhaps some of André and Devon’s grandchildren will get their own HEA. Let’s hear it for the older heroes & heroines. They do, in fact, still got it.

Because I’ve listened to him narrate HIS MAKE-BELIEVE BRIDE, as I was reading HER IMPOSSIBLE HUSBAND, I could hear the outstanding Tim Campbell narrate the voices in my head. Therefore, I was thrilled to finally get to enjoy the audio version actually narrated by the outstanding Tim Campbell. His voice and various accents helps to draw you into the story and bring the characters to life, including Justin and Mouette’s children, who are now older. As I always say, Cynthia Wright’s storytelling paired with Tim Campbell’s narration are both engaging and satisfying and I can’t wait to hear what’s next on the horizon.

I received a free review copy of this audiobook in exchange for an honest review.

Such a fantastic read

a very lovely romance based on real feelings between two people you can see the push me pull you in the relationship that most of us have and it's funny to watch it from outside. it's wonderful to see how it develops into a fabulous romantic adventure

This was the first audio book I have ever listen to. I had read this book before, but adding the audio brought it to a whole new level. It was more engaging & had more emotional appeal than just reading written words. The narration brought the book to life!