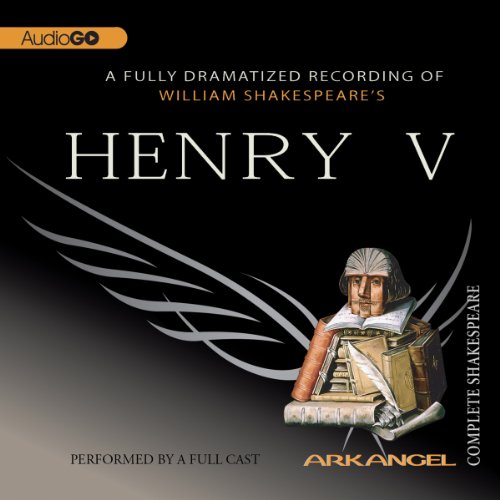 Henry V is a study of kingship, patriotism, and heroic determination tempered by tender comedy as Henry courts Katherine, princess of France.

Henry, the noble and courageous young king of England, decides to invade France, believing he has a rightful claim to the throne. At Agincourt he leads his army into battle against the powerful French forces and, against all the odds, wins a famous victory.

The Best Version of the Best Thing Ever Written

What did you love best about Henry V?

What's not to love? The quality of the production, the skill of the actors, the work of Shakespeare all combine to make this a truly memorable experience.

What was one of the most memorable moments of Henry V?

Of course, everyone remembers (and many can recite) Act III, Scene I and Act IV Scene III. Both are worthy of an entry into the "English Language Hall of Fame" if there were such a thing.

However, there is pure gold to be found in the several appearances of Flewellen throughout the story. I particularly love the exchange between Flewellen and King Henry immediately following the Battle of Agincourt. The sheer admiration and love Flewellen has for King Henry - both as his sovereign and as a fellow Welshman - for me must be among the best written and, in this case, best presented exchanges in theater.

What does the narrators bring to the story that you wouldn’t experience if you just read the book?

The actors in each and every role are superb and bring the story to life the way Shakespeare intended. The entire production is excellent and I can only imagine that the man himself would have been proud to know that his work was handled in such a masterful way by the directors, actors and recording engineers alike.

"...The pretty and sweet manor of it forced those waters from me which I would have stopped. But I had not so much of man in me and all my mother came into mine eyes and gave me up to tears." - Exeter, Act IV Scene VI

I cannot recommend this version of Shakespeare's Henry V enough. Like a great novel or a moving film, this audiobook is one you will keep as a treasured part of your library to enjoy time and time again.

I read along as I listened and was delighted as the story unfolded, true to the text. Better reading than any other production I have seen on stage or film. Particularly captured Saint Crispian’s Day speech with the intensity of wartime. Well done.

loved it. it was so good I couldn't stop listening

Henry V is one of my favorite plays. they performed it beautifully. I will definitely be listening again.

Henry's courtship of Katherine was well done. It approached - though did not reach - Branagh's production. Princess Kate's performance was superb.

An excellent recording of a very dense play

Henry V has been and always will be a bit daunting to me. The heavy use of figurative language, poetry, and the sheer amount of characters make this play one of the plays I’m intimidated by. However, this recording is an excellent supplement to just reading the text, and with a large amount of the text preserved (I was reading the Folger edition while listening, only a few lines here and there were missing) it’s one of the best recordings of a Shakespeare play that I’ve encountered on audible. My only real issue with the recording was the massive amount of sound effects used, they got a little repetitive after the first few acts.

Indeed, fully dramatised. It sounds more like something your grandma was watching from the tv and you overheard, than a play being told to you. Still really good.

Our whole family enjoyed this a great deal. I highly recommend it! The performance was top notch.

Enjoyable and lets you stand in history's place .

I have only One friend who would enjoy this.

During the performance I was trying to place Joan Od Arc and her role in this.

Henry's view of the aftermath of battle, paying tribute to the French dead.

Thoroughly enjoyed this play, in fact the full Henriad. And the more I listen to them the more I lessen and enjoy them. The narration is absolutely first class. Can't recommend this enough.