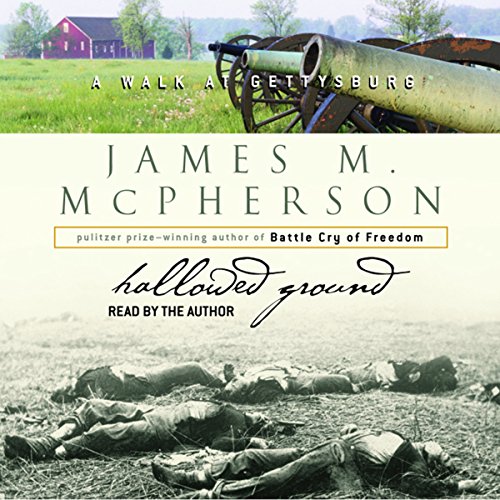 "This book is a very good thing in a remarkably small package." (Publishers Weekly)

The events that occurred at Gettysburg are etched into our collective memory, as they served to change the course of the Civil War and with it the course of history. More than any other place in the United States, Gettysburg is indeed hallowed ground. It's no surprise that it is one of the nation's most visited sites (nearly two million annual visitors), attracting tourists, military buffs, and students of American history.

McPherson, who has led countless tours of Gettysburg over the years, makes stops at Seminary Ridge, the Peach Orchard, Cemetery Hill, and Little Round Top, among other key locations. He reflects on the meaning of the battle, describes the events of those terrible three days in July 1863, and places the struggle in the greater context of American and world history. Along the way, he intersperses stories of his own encounters with the place over several decades, as well as debunking several popular myths about the battle itself.

What brought those 165,000 soldiers - 75,000 Confederate, 90,000 Union - to Gettysburg? Why did they lock themselves in such a death grip across these once bucolic fields until 11,000 of them were killed or mortally wounded, another 29,000 were wounded and survived, and about 10,000 were "missing" - mostly captured? What was accomplished by all of this carnage? Join James M. McPherson on a walk across this hallowed ground as he be encompasses the depth of meaning and historical impact of a place that helped define the nation's character.

Yes. The story is straightforward and understandable. Mcpherson gives a nice 2 hour summary and brings up some personal notes and references to break the story up.

The personal stories behind leaders as well as the 'tour' of Gettysburg that runs along with the story.

Which character – as performed by James M. McPherson – was your favorite?

None in particular, being a Marylander.

My memorable moments include Chamberlain's victory at Little round top, Lee's thoughts of Pickett's charge, the honoring of veterans but, especially, Lee's retreat followed by Mead and Lincoln's response.

Before reading this book try to have a basic understanding of the civil war and Major generals particularly before Gettysburg, but this is not completely necessary.

I have then to Gettysburg many times. I have read killer Angels more than five times. I have also read the work colleges guide to the battle of Gettysburg. This book is by far the easiest to comprehend.