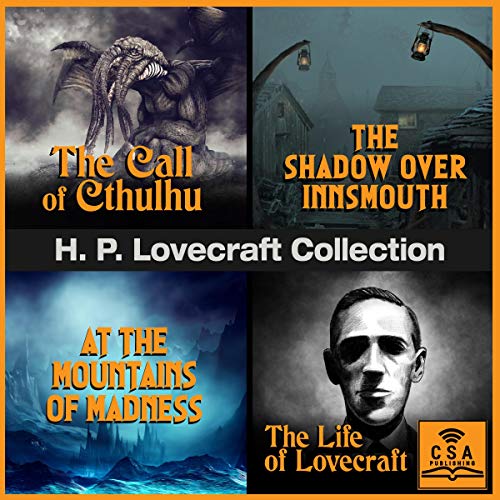 Four works in one collection.

Story 1: The Call of Cthulhu by H.P. Lovecraft

Written in the early 1900s, this short-story is forged in horror, touching on the occult, voodoo, beasts, dreams, and death. The mysterious circumstances surrounding the death of several characters leads the narrator to believe that a bas-relief sculpture is linked to the Cthulhu Cult which is described as a monolithic creature that causes anyone who looks upon it to go insane.

Story 2: The Shadow Over Innsmouth by H.P. Lovecraft

A horror novella, The Shadow Over Innsmouth, is steeped in superstition, human sacrifice, and strange sea creatures. As the narrator learns about the history and downfall of the town, he ultimately realizes that he is a descendent of the cult leader who worshipped and sacrificed to the Deep Ones in exchange for jewelry and wealth.

Story 3: At the Mountains of Madness by H.P. Lovecraft

During an expedition of discovery to Antarctica, the narrator and geologist, William Dyer, attempts to warn others who may follow of the strange findings in this remote land. In this science-fiction horror story, ancient ruins and pre-historic life forms are thought to have been the casualties of the Shoggoth, a monster of enormous size and the ability to incite madness in anyone who looked upon it.

Story 4: The Life of Lovecraft: An Original Biography by CSA Publishing

Howard Lovecraft, well-known for his style of weird fiction and horror stories, is attributed as the creator of the Cthulhu Mythos and one of the most significant authors of supernatural horror fiction of the 20th-century. From an early age, his interest in horror began with tales that his grandfather shared of ancient evil, mighty gods, dreamlike realms, and cosmic creatures.

Although not typically a fan of horror stories, I was drawn to this collection out of curiosity. After I got over the initial terror it incited, I realized how much I enjoyed reading about the dream-like state, weird creatures and the occult. Usually I am too scared to read something like this. However if was a much-needed escape from reality. I highly recommend this book collection too to anyone intrigued by the strange, surreal, the morbid. Looking to escape from the stresses of everyday life temporarily? I was shocked at his easily I was transported into this world of monsters and madness. You’ll love it too!!!

This collection has the perfect mix of Lovecraft’s most popular stories.

Although there are many top fiction writers scattered throughout the past few centuries, Lovecraft old gods and horror story delivery deserves its own praise and respect. This particular fiction collection really helped me appreciate some one of the older pioneers of fiction writing.

Narrator - Well spoken, and he delivered the stories with confidence and ease. When choosing a new audiobook I prefer to have a narrator with experience and one that is also easy to follow (pleasant voice). Roberto Scarlato offers both. I searched him on Amazon and he has narrated quite a lot of fiction pieces. Looking forward to listening to more.

H.p. Lovecraft is a master storyteller and this is a great way to listen to these timeless stories. The classic tale of Cthulhu is here in all its glory and I encourage anyone to check it out.

The Best of Lovecraft Collections

Do you also enjoy alien gods and scary creatures? These scary stories are from the best of the best, H.P. Lovecraft. The Call of Cthulhu is his most famous and arguably his best work, which is along side his other extremely popular scary stories in this organized collection. I highly recommend this collection.

Highly recommend! Great stories and tremendous value. The audio quality is exceptional. I will be recommending this to my friends.

The Call of Cthulhu

This story... Wow! I just recently started listening to it and I cannot stop. It's a classic for a reason.