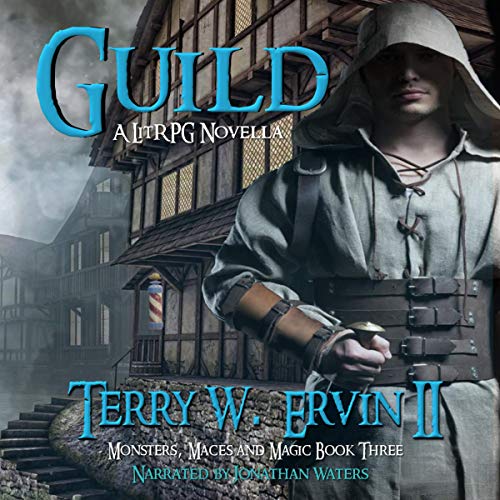 You can’t hide in an RPG forever.

Eighteen years ago, Tom, a barber college student, got trapped in the Monsters, Maces and Magic game world as Josiah the thief.

The first two adventures saw all of Tom’s party members, also trapped within the game world, perish within the fetid depths of the Dark Heart Swamp. His subsequent stint adventuring with NPCs proved short lived. He preferred survival.

Over time, Tom became Josiah, adopting a life blending in with the game world’s NPCs. He gave up advancing as a thief, trained as a lay healer, and works as a barber, cutting hair, pulling teeth, lancing boils, and functioning as a low-level operative within the local thieves’ guild.

But life, even one lived as a faux NPC, can get interesting. Such happens when a young half-goblin thief named Gurk shows up in Josiah’s shop, looking for information. Little did the pair know that the unobtrusive barber shop would become a focal point in a brewing guild war.

This was a fun book to listen to. Although I haven't listened to or read the first two books, I was able to enjoy this book. I do think having listened to or read the first two would have made this one even better, it can be listened to as a stand alone. I loved the characters, the world, storyline, and overall feel of the story. If you enjoy fantasy, LitRPG and/or D&D then you really should check out this book. The narration was superbly done. Jonathan Waters gave each character their own voice and emotions. He has a nice voice and read at a good pace. I feel Mr Waters really brought the story to life and truly enhanced the listening experience. I'll be recommending this book to my friends and looking into getting the first two books.

This was a great Litrpg title. The author did a fantastic job bringing the characters and world to life. The Narrator was spot on when it came to each individual character and kept me involved the whole time. The biggest telling point is that I had to go back and pick up the first two books just to follow the whole story. I received a free copy of this audio in return for an unbiased review.

Fantastic addition to the series

This is a great novella in the series. It doesn't follow the normal cast of characters we've grown used to in books 1 & 2, but a side character. That being said, I really quite liked the different perspective and how it tied into the main story. I thought it adds depth to the world building the author has done and am eager to see where things go from here. The narration was great and definitely kept me thoroughly entertained. It is only 4 hours, but well worth the listen, in my opinion.

An excellent short story for MM&M


I’m going to be honest. When I first saw the description for this book I was a touch disappointed, I didn’t see any mention of our party from the main series, and this looked to be an internalized battle between different guilds. I knew that with Ervin it would be good, I just wanted more of my good old adventuring party. So I started this with some trepidation.

Guild is a great gamelit short story that tells the tale of our adventuring party from the Mazes, Magic, and Monsters series from the perspective of another player who has been lost in the game for some time. The MC, is a thief who has gone semi-legit, working as a barber surgeon in that wonderful city of hills, but still keeps his toe in the seamier side of the underworld. Life as a non-adventurer hasn’t been bad, but it doesn’t seem to be as fulfilling as he’d of liked. Still, Josiah (the MC) has lived a life free of monsters and mayhem so he’s satisfied.
That is until the night everyone’s favorite half goblin strolls into his barber shop looking to get a haircut. Turns out Gurk is just in time to help Josiah battle against a rival guild that has targeted his establishment to serve as an example.
I have to say that I really liked this treatment of the group from another character’s perspective, and the question I kept waiting to be answered was whether or not he would cotton onto the realization that they were players trapped just he was. I won’t say if he does or not. What I did enjoy was getting the realization that Josiah had noticed Player Characters, i.e. characters that were actually operated from the other side of the veil so to speak. Players that manipulated their characters like puppets, and that one NPC was more than likely a former PC who had been abandoned by her player. That is just smart and creative gamelit hitting the pages. Seriously, some thought has gone into this book, and I ate it up. It helps that Josiah is fun and interesting, and that his takes on the “main” party are very observant and give the listener a very different spin on things in their world.
The story is pretty short, and basically just centers around Gurk having gone to see Josiah in the hopes of learning about his cursed dagger. All the action centers on what happens between the two of them, initial meeting down to the appraisal, and I have to say that I really loved this book. Normally, I get antsy when an author sort of abandons their main team in favor of a side quest, but this works in a lot of ways. First, because it includes the main party, secondly, because it is a short story and furthers the original story line.
Waters carries the story on able shoulders, and I have come to really appreciate his ability to tell a tale. He’s really made this his series, and I love his interpretation of Gurk. Oh, and I have to admit that he really played Josiah like a weary old player.
Kudos to Ervin for centering more on the half gobbling and not rotating between him and the gnome. Gurk is far more interesting, and is more fun to listen to and I think that he and Josiah mesh pretty well together.

Final score? This is a solid 8.1 stars. It adds to the main series, and fleshes out the game world in a wonderfully sublimated way that doesn’t smack you over the head. I really enjoyed this, I think you will to.

As seen on the Litrpg Audiobook Podcast!

This story takes place in the same world as the other MM&M stories but features a new character as the narrator/protagonist. Sure, our favorite goblin thief Kirby shows up, but this is not his story.

I found it a little disconcerting at first but the story is well written and Waters does a good job of voicing the new characters.

What this short story does do, however, is introduce the idea that maybe there isn't a way out of the game and maybe in-game death is permanent. It definitely made me think.

While I would rather have had a full length novel, this short story at least kept me interested in the world and gave me some insight that I wouldn't have gotten otherwise through Glen's eyes.

Give it a listen while waiting for book 4.

A decent novella if you are into DnD!

So, I got this from the narrator for an honest review. This is my first LitRPG and I found the characters to be interesting but the litrpg stuff to be really off-putting, especially with the discussion of "This knife gives me +2 to my dex." type stuff. I feel there is definitely a place in the world for this type of novelization, but it definitely kept taking me out of the action and out of the story as I forgot it over and over due to the characterization. The main character is injured because he loses his "saving throw", I just do not feel that the mechanics of the dungeons and dragons really work for someone who is not really used to it.

However, if you love DnD? This is a great novella. I really loved the main character, I wanted to know more about him. This Novella was the perfect length and the narrator gave a great performance.

Definitely Made Me Think of Campaigns

I received an Audible code via Audiobook Boom for an honest review. What follows is my opinion and mine alone. There was no compensation made for this review.I love fantasy. Give me a five man band, a quest, and an elaborate world any day. Give me intrigue. Give me action. Give me D&D. Yeah, I play D&D, so what? (if you care, I prefer my fighters and barbarians. Usually humans and male. One day I'll get to play a half-orc).Anyways, when I see a fantasy audiobook about a person stuck in a RPG, I was won.Guild is a short action packed story that feels like a single campaign day. It isn't the first in the series but it can be used as a standalone. I was pulled into the world and could see the rules of the world unfold. Like the comment about this book just under the blurb, this really does feel like a game. A fun game that I am going to have to continue.If you love fantasy and action, this is a fun quick read that keeps your attention. I was able to listen to it while working and it made the work day very enjoyable. I did have a few weird looks with my random giggling though. So, beware on that.All in all, I'm going to be listening to the other two one day.Final Rating: 4/5

My third read from author Terry W. Ervin II. This book starts a little slower than the first 2 books but about a third of the way through it took off. Reminiscent of Joel Rosenberg’s Guardians of the Flame Series this was a well-written entertaining read, looks to be an enjoyable series. I was given an Audible copy of this book & am voluntarily reviewing it. (RIP Marley January 20, 2014 - July 24, 2018).

This a a real treat! The new characters and perspective of the story were very interesting, and the quick ending left me wanting more. Could be the best in the series.

I have not read the earlier books, so this one was read as a stand alone. It gave enough detail that it was perfectly fine by itself, but I honestly think I would have enjoyed it more if I had read the series. I did like the fact that this was short enough that it can be finished in a day... Often these stories can be long enough that I end up staying up way too late wanting to finish them and not wanting to put them down. This was a very well written, detailed and narrated wonderfully. If you are into D&D and RPG Lit. then you will find this to be a fun read/listen.

As a morality rating I would warn that as in this genre you will find some graphic violence and content geared for young adult audiences with some sexual references and content.