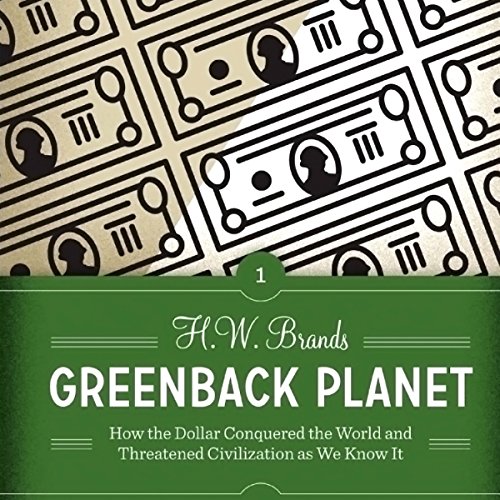 "Brands is on the path to becoming the preeminent popular historian of his generation... There is no denying his talent for clear, cogent, and uncluttered prose." (Chicago Tribune)

How did the greenback achieve planetary dominance a mere century and a half after President Lincoln issued the first currency backed only by the credit - and credibility - of the federal government?

In Greenback Planet, acclaimed historian H. W. Brands charts the dollar's astonishing rise to become the world's principal currency. Telling the story with the verve of a novelist, he recounts key episodes in US monetary history, from the Civil War debate over fiat money (greenbacks) to the recent worldwide financial crisis. Brands explores the dollar's changing relations to gold and silver and to other currencies and cogently explains how America's economic might made the dollar the fundamental standard of value in world finance. He vividly describes the 1869 Black Friday attempt to corner the gold market, banker J. P. Morgan's bailout of the US treasury, the creation of the Federal Reserve, and President Franklin Roosevelt's handling of the bank panic of 1933. Brands shows how lessons learned (and not learned) in the Great Depression have influenced subsequent US monetary policy, and how the dollar's dominance helped transform economies in countries ranging from Germany and Japan after World War II to Russia and China today. He concludes with a sobering dissection of the 2008 world financial debacle, which exposed the power - and the enormous risks - of the dollar's worldwide reign.

The book is published by University of Texas Press.

Greenback Planet: How the Dollar Conquered the World and Threatened Civilization as We Know It (Discovering America)に寄せられたリスナーの声

A good, clear telling of the basic story

I didn't hear anything surprising here, having read many books on this history, but I felt walking back over the basic narrative was valuable. It is a fine refresher. It has a sort of thumbnail coverage of all the biggest players and events. I would like more at the end about the dollar's risks post-2008 and going forward (and this book is a few years old), but there is a nice, if fairly quick, summation of the situation. I found this book highly listenable, as I pretty much listened straight through. There is essentially nothing on cryptocurrency, which makes sense, as this emerging history is newer than the book.