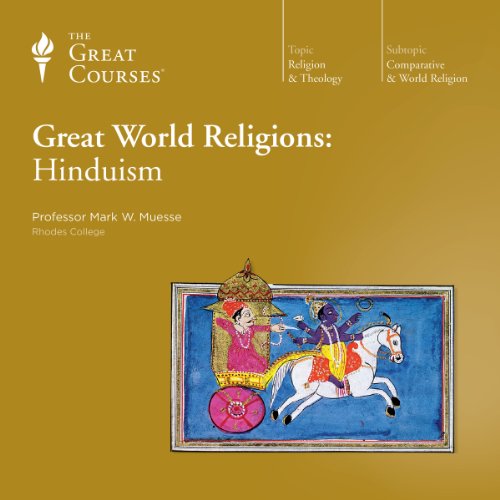 In this 12-lecture series, you'll encounter a religion that is perhaps the most diverse of all; one that worships more gods and goddesses than any other, and one that rejects the notion that there is only one path to the divine. These lectures provide a window into the roots of, perhaps, all religions. You'll explore over the course of Hinduism's 5,000-year journey: the Indus Valley civilization; the sizable variety of Hindu gods and goddess; the sacred writings in the Vedas, Bhagavad Gita, and Upanishads; Hindu ritual purity rites; the Aryan language of Sanskrit, whose roots can be seen in English words such as "divine," "video," and "ignite"; and much more.

The story of Hinduism, you'll come to see, is the story of very non-Western traditions (such as arranged marriages and the caste system) that have survived and thrived for thousands of years. It's also home to a wealth of gods, terms, and practices (such as karma, Krishna, yoga, and guru) that have found a home in Western lives and language. Along the way, Dr. Muesse discusses salient aspects of Hindu life and places them in historical and theological context. He also explains that Hinduism honors all seekers of truth, that it contains multiple paths to divine reality (the way of action, the way of wisdom, and the way of devotion), and that it can be both a monotheistic and a polytheistic faith.

Not a real description of Hinduism

Very short and sometime unclear description and practices. Lecturer may have lived in India but that does not it all correct. He might be influenced by local practices. Historical facts are not very true or rather tangentially verifiable. I shall point out two...1. Saying holi is largest Hindu festival, is absolutely not true, it is important but far less important than Diwali or dussehra. 2. Sati though was practiced but was far less common than speaker make us believe. It was only practiced in a small section of upper class Hindus in a very small area of india. British though successfully abolished it but claim they are doing ‘civilizing of Indians’ made it look like it was far more practiced tradition than it really was.

An important introduction into Hinduism

I have started to read a summary of the Mahabharata, one of the Hindu faith’s sacred scriptures and the longest human epic ever written. When I came across the concept of ‘purushartha’ (the goal of human existence) that consists out of ‘dharma’ (conduct within society), artha (economic actions), kama (pursuit of pleasure) and moksha (spiritual activities), I knew I was in trouble. My previous formal study in the phenomenology of Religions just weren’t enough to give me an understanding of the great epic.

I discovered the Great Courses twelve lecture course by Prof. Mark W Muesse on Audible and decided to try it out. I am glad that I did!

In a mere twelve lectures Prof. Muesse takes the listener through the family of Indian faiths commonly called Hinduism. He starts of placing Hinduism within an historical context from which he introduces concepts and ideas that entered these religions piece by piece, almost like building a puzzle.

I founded his lectures on the Vedas, the oldest holy writ of the religion very insightful. The fact that there was an unknown civilisation discovered in the Indus valley with a yet undeciphered written language is intriguing. It was also interesting to hear resonances of Ancient Biblical family practises in his lecture ‘Men, Women, and the stages of life.’ I found the way a woman was always connected to a man through the various stages of life very interesting. Even the idea that most arranged marriages seems to be happier and less prone to producing divorcees than so-called love marriages. I wish there were a PDF of depictions of the Hindu gods that could be used with the lecture ‘Seeing God.”

However, Prof. Muesse opened the world of Hinduism to me with a clear and interesting presentation. It was easy to follow in very informative. I can heartily propose this course to anyone interested in Hinduism.

Good, but I want more.

Good basic overview, if another more in-depth course on the subject was available I would be interested in adding it to my religious studies collection.

Prof. Muesse's classes are always the best! I have learned a lot from this man. I would take any class he offers, regardless of whether or not I'm interested in the subject matter...he's that good!

Clear and accurate. Dr. Muesse ..A Big Thank you.

i am a Hindu who lives in the US. I wanted to touch base with Hinduism and absolutely loved listening to these lectures. Profound.

Made sense of a complex religion

I love India and Bollywood movies and have been fascinated by the temples and rituals I witnessed in my trips there. But I knew almost nothing about Hinduism. What I could see confused me. The religion seemed whimsical and imaginative, but I was sure I was misinterpreting what it was about. This series of lectures set me straight.

Dr. Muesse's lectures are informative, and he makes Hinduism's concepts and beliefs comprehensible to my Western, linear mind. Starting with the origin of Hinduism, he traces its evolution through the millennia until modern times. This might sound funny, but now I understand much better the plots and characters' motivations in Bollywood musicals.

The professor's delivery is pleasant to listen to. He has a slight Southern (US) accent and an earnestness that I enjoyed. Without reservation I recommend this college course.

While no book can claim to cover all the concepts of Hinduism, which are themselves at variance with each other at times, this series of lectures does a very good job. The best thing about the book is the Timeline that it provides at the beginning. That, in itself, is a work of intensive research and simplifies things for the reader. I am extremely grateful for that. Being an Indian, I had some previous knowledge but this course has helped me understand things so much better. It has also ignited a hunger to learn more on the subject.
I recommend this course for beginners or people like me who know a bit but not quite enough.

For an introductory course this was well done and fits some really good content in 12 short lectures. While I'm sure it is difficult to adequately cover all of the aspects of Hinduism in such a short period of time, I left the course certainly feeling like the essence of this great religion was presented in an easy to digest manner.

This course covers all of the foundations and aspects of Hinduism from the ancient societies that formed the religion to its sacred books, to its main beliefs, to its pantheon of gods and goddesses, to the stages of life for a Hindu man and woman, to Hinduism’s interactions with other religions and peoples.

My personal highlight was Lecture 12. The professor brings the history of Hinduism up through our times focusing on its interaction with Islam and imperial Britain. Thrilling stuff!

The reason I couldn't give this five stars is it just didn't keep me at the edge of my seat the entire time and that is mainly attributed to the professor's teaching style.

He had a certain air to him that made him seem too academic, almost robotic with little change of tone/emphasis and not much personality. I know this shouldn't matter in the long run when evaluating courses since judging one by personality vs. whether they taught effectively sounds shallow but The Great Courses has always been good at featuring professors who help you feel like the time spent was satisfying not just because you learned something but also because you were entertained and enthralled while doing so.

Another downer was the discussion on the Bhagavad-gita (Lecture 10). Having listened to a number of other Professor's takes on this great book, I found this one to be lacking. Sure the professor narrated the events of the book and covered the important sayings but he didn’t seem to weave them into anything resembling a summary of its main theological meaning or insights as well as Professor Berkson did in "Cultural Literacy for Religion: Everything the Well-Educated Person Should Know" or Professor Hardy in "Great Minds of the Eastern Intellectual Tradition".

Still, this doesn't change my overall positive impression of the course. There is no better compliment to pay an instructor than: I walked away learning things I hadn't known going in. This course achieved that objective: Professor Muesse enriched my understanding of Hinduism. Good work!

It has always been very interesting knowing about the religions of the world, and in this course they take us not only into the religion, but into the society and the background. This helps you see how the beliefs of a country as complex, as India, has shaped it through time.

This course provided an excellent high-level overview of Hinduism, and revealed many elements that deserve further exploration. Looking forward to the road ahead!

A fantastic, well-explained introduction to the basic stuff you need to know about Hinduism. Perhaps not all the detail you could wish for, but for a 12-lecture course, this does pretty well and gets you to a place where you'll have a good amount of context for your further research on the subject. Engagingly taught, too – I thought Prof Muesse's explanation of ritual purity and impurity via an analogy of dropping food on one's tie was particularly good

THIS IS A GREAT INSIGHT INTO HINDUISM

I found this audiobook a wounderful insight into a trully compex religion I have studied many world religions but not much about hinduism it seems verry non violent and peaceful just what the world needs today five stars!!

A very basic introduction to Hinduism

Content and performance is delivered like a drawn out high school report, almost comical. read the Wiki pages instead.
Very disappointing

Excellent introduction to a very difficult and complex subject. Highly recommended.
However I need to go back to the beginning and relisten probably twice more to really grasp this.

A good introduction to the origins and development of Hinduism. A valuable counterpoint to the presentation of Hinduism by many western thinkers, who stress its transcendent or higher spiritual qualities without looking at more problematic areas such as caste or sex relations. A little short compared to some of the other great courses.

A summary of Hinduism that works

I wanted an introduction to Hinduism prior to going to India. Nothing too heavy, but informative all the same.

This series of half hour lectures did the job superbly.

Decent introduction to a complex tradition

The course is good at elucidating the main points of the Hindu tradition. The constant reminders of the fact that the tradition is more incoherent than is presented is also useful for the listener.

When I started this series I knew virtually nothing about Hinduism. After 12 lectures, I still don't feel like I know very much. Maybe this is due to the nature of the religion, which is incredibly diverse, or maybe the lecturer waffles too much. I'm not sure. He says during the lectures that to understand Hinduism you really need to see, smell and even taste it, and I think that may be true. A religion like Hinduism, with it's heavy emphasis on shrines and visually-represented gods, may be too hard to understand without some images. I also found the delivery a bit off putting because the professor has a broad, regional American accent, although at least he is very clear.