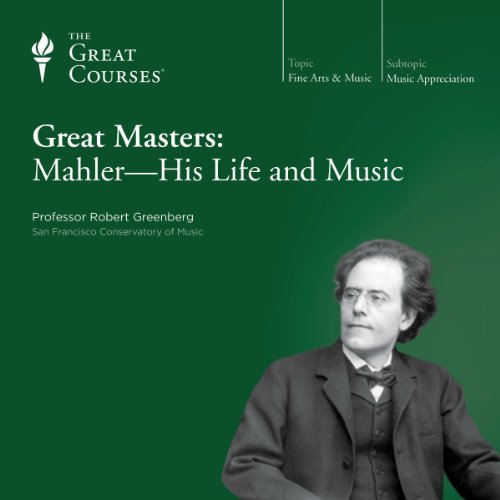 More than many other composers, Gustav Mahler's works are highly personal expressions of his inner world, a world of overwhelming alienation and loneliness - "thrice homeless," in his own words, "as a Bohemian in Austria, as an Austrian among Germans, as a Jew throughout the world - everywhere an intruder, never welcomed."

Incredibly, Mahler was able to draw upon the diversity of this world that offered him no true home, as well as his often tortured inner world, to create rich and original music. It's a music whose power you will be able to appreciate fully after experiencing this eight-lecture exploration of the life and work of this titan of post-Romantic musical history, a complex, anxiety-bound visionary whose continual search for perfection and the answers to life's mysteries is profoundly reflected in his symphonies and songs.

You'll learn, through both lectures and musical excerpts, how his symphonies are vast repositories of his intellectual, emotional, and spiritual expression that made him the first exponent of Expressionism, the early 20th-century art movement that celebrates inner reality as the only reality - but explored by Mahler using the musical language of the century just ended. And you'll learn how Mahler's music is, ultimately, about himself: the lonely, isolated individual.

If only could it be longer

Such a course feels like an appetizer. I want to hear more now. Is there a sequel?

A Great Survey of Mahler's Life and Major Works

Good enough that my major complaint is I wish it were just longer. Professor Greenberg with his wit, knowledge, and charisma is able to draw a nice narrative arc through the life of Gustav Mahler. This course is broken into 8 lectures:

It all felt a bit too compressed for me. Perhaps I'm just spoiled because I've been listening also to his 30 Greatest Orchestral Works and each piece in that recording is given a whole lecture (45 minutes). I would have liked to see more time on each of his major symphonies and works AND not lose any of the actual history.

But really, that is my only major complaint. I would recommend for the serious listener to also go buy the major symphonies (from major labels and great conductors) and listen to them a couple times while listening to this course. I fell in love with Mahler's 5th & 9th before this course, but this course gave me a lot more of Mahler to love.

This is the fourth of Greenberg's composer series that I have listened to, the others being on Shostakovich, Stravinsky, and Bach. While Mahler is my least favorite composer of the four, I thought that these lectures were the best I've heard so far. Greenberg connects Mahler's life with his music in very compact chunks that made me want to hear more. As usual, Greenberg's lecture style is charming and amusing and he moves the lectures along at a good pace.

An absolute must for all Mahler fans

Ever since I was introduced in a whim to the work of Gustav Mahler back in the early 90s by a man who quipped, “You enjoy heavy stuff like Zeppelin? Take a break from Mozart; you need to listen to Mahler.” I was a member of the Columbia record club at the time and the featured classical CD of the month was a recording of Gustav maulers Symphony No. 2. I dove in, and suffice it to say, I never looked back. I am a shameless and whole hearted devotee of the cult of Mahler. Despite years of reading and documentary watching and classical performances all over the country, Professor Greenberg brings the joy and emotion of not only Mahler’s music, but the details of his life into palpable view in this series of utterly enjoyable lectures. One often doesn’t think of “a great sense of humor“ when it comes to the work of Gustav Mahler. But Professor Greenberg is never without humor and wit from beginning to end of these lectures. This is by far one of the most enjoyable listens I have yet experienced here on Audible.

How I wish there is more about his music

After listening to this rather short course in a few days, I share the opinion of quite a few other reviewers. I feel that there can easily be more in this course. Personally I am more interested to listen about Mahler's music and was disappointed that the course talked much about his life and not enough about his music. Yea, sequel please?

Fantastic as always. Thanks.

Robert Greenberg never fails. Loved the course. Get all the biographies. You are worth it.

Greatest opera conductor to ever live.

Robert Greenberg has brought another composer to life. You can not go wrong with these lectures about the composers from the great courses.

As a Classically trained musician, I’m sad to say, I had Mahler wrong. This fascinating lecture corrected the inaccuracies I had developed in my own mind after listening to the music of Gustav Mahler. I am happy to appreciate him now in the way he deserves. Thanks to Mr. Greenberg.

My friends, you have been warned. Precious little music offered -instead, at least in the Audible version, this book serves primarily as a platform for the author's sensationalist and cringeworthy colloquial retelling of Mahler's life. Endless quotes. Endless Alma. Endless shouting. Canned applause between chapters. Really? Such a shame, since a decaffeinated Mr Greenberg has clearly much insight into the great composer's life and music.

I have watched and listened to about all the Greenberg I can take. While his courses are generally well-structured and content rich, his delivery just annoys me. Some courses are good enough to defeat that annoyance---the bad jokes and pompous delivery---some are not.

This course both enhanced and diluted my appreciation of Mahler's music. There is indeed genius in his grand symphonies but they all have a dark and brooding under-current. Which, after listening to them all with the background provided by this course, makes them all sound the same.

Can I recommend this course? Yes. Did I love it? No. If you want to know more about Mahler's music there isn't much out there so this is a good choice in spite of the flaws.

Oh, why the loop feeling? The lectures open with a rather dreary quote and which sets up a cycle of dreary to symphony to dreary to symphony cycle. Mahler indeed had his share of tragedy but he also enjoyed success. Either the persecution was not adequately explained or Mahler was just a depressive personality. I suspect a bit of both were at the root of his rather gloomy pieces.

Robert Greenberg is an enthusiastic and animated lecturer. This is a good introduction, I learned a lot and will explore more about Mahler

Fascinating but too short!

This is a clear and fascinating exploration of Mahler's life and works but it could easily have been twice as long as the content was too condensed.

To deal with Mahler 's 10 Symphonies properly more time should have been spent on each symphony discussing each movement . Too much story not enough about each symphony