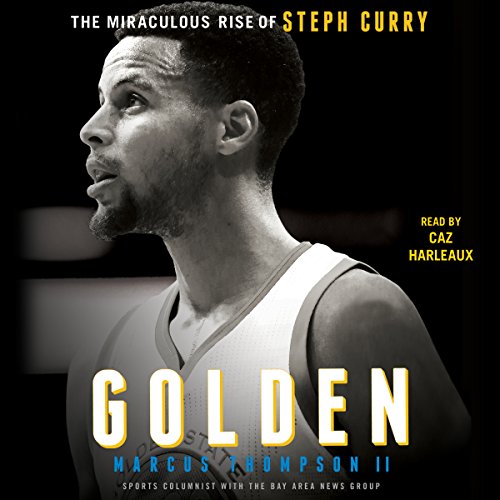 The incredible and inspiring story of Stephen Curry, the greatest shooter basketball has ever seen, and the ascension of the Golden State Warriors, a team on the verge of being an NBA dynasty, by longtime Warriors beat reporter and Bay Area News Group sports columnist Marcus Thompson.

When it comes to Stephen Curry - point guard for the Golden State Warriors and reigning MVP of the NBA - journalists, fans, and sports analysts are running out of ways to say "wow". Deemed too small and too short at 6'3" and 180 pounds by NBA coaches around the league, Curry has taken the game back from the bigger men who usually dominate the court. With his incredible shooting ability that started a "three-point revolution", he led the Warriors to 73 wins in the 2015-2016 season, beating out Michael Jordan and the 1996 Chicago Bulls' longtime record.

Very, very corny at times. Almost to the point that it's like a children's book. The narrator is perfect for this kind of book, but it didn't really live up to my expectations. I was thinking there would be more in depth stories on who Steph is as a person and whatnot. It was more of a breakdown of his games and what was going on in more detail. It also skipped all over the place. It goes from a playoff game to his childhood, to another playoff game, to meeting his wife. Could've been better, but it definitely wasn't terrible and I did learn a lot about Steph in general, but I didn't know an insane amount about him to begin with. So use that information as you please.

This was my first time listening to a book being read instead of reading it myself (which I still might do) I really enjoyed listening to this book learning about the upbringing of Steph. Learning about his relationship with the church and his mother really shows you why Curry is the man he appears to be.

My one minor knock on the book was it seemed at times repetitive. As if Marcus wrote each chapter to be its own stand alone article for ESPN or some other sports news outlet. Each time needing to reintroduces to Currys amazing exploits. I did not mind this at all, just something I noticed.

I would give 10 stars if I could though fantastic!!!

recommend for Dubs and Curry fans

offers lots of insights into what makes the Dubs and Curry go...a good fan read or hear

For every #DubNation fan out there, this book won't teach you many new things about Curry, but it will make you appreciate his greatness even more. Marcus Thompson is a legend, and his book did not disappoint.

It makes you appreciate the hard work of Steph

It was fun to hear the back story of Steph's life and how he is trying to live life and play basketball the right way. If you hate him for whatever reason it will be good to get to know what he's all about.

If you know how special SC30 is, this is your book

it's a familiar story that will never let you forget, or doubt, the greatness of Steph

The story of the rise of one of the most surprising and unique talents of a generation reveals so much about this remarkable star.

Boring, only for Warriors fans

I am an NBA fan but not specifically a warriors fan and I got bored very fast. 95% of the book is just a recap of the Warriors seasons from 2014-2017 and you learn hardly anything about Steph Curry’s life. I was hoping this would be more of a behind the scenes look but it is strictly a recap of the Warriors games. Also the story does not follow any chronological order which is frustrating.

I like Marcus Thompson and love Steph Curry. So I had no trouble getting through it. But the writing is kinda scattered and unorganized and the narration was not very lively. I think it would have been much better if Marcus narrated it himself.