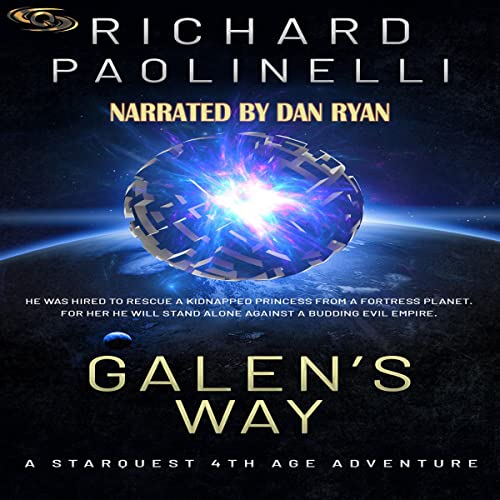 Millions of years in the future, humanity has been driven out of the Milky Way and now calls the Andromeda Galaxy home. Lost in their murky past are the tales of great knights who held the line against the invasion of a dark force until the rest of humanity could escape their doom. The last and greatest of these knights was Galen Underwood.

Long after that heroic stand, a mercenary by the name of Galen Dwyn has been hired to rescue a kidnapped princess. Enticed by a healthy down payment and a chance to settle an old score, Galen accepts the job, only to find out it's a lot more than he bargained for.

Soon Galen finds himself weaving and dodging through a web of political intrigue as the very forces that chase him have set in motion plans that will throw the galactic alliance into civil war.

To his surprise, he also finds that the rescued princess might not be quite the spoiled brat he rescued from the clutches of her keeper.

Accompanied by the princess, his former mentor, and a snarky AI, Galen sets out to find a way to outsmart entire kingdoms, keep the princess alive, and avert the deaths of millions.

Of course, he'll also learn the reasons behind his namesake's chosen path, as he realizes that the only way to win is Galen's way.

Dragon Award finalist Richard Paolinelli takes us on a grand adventure in this space opera offering set in the first audiobook of the Starquest Saga. Set in the fourth age of Dragon Award winner John C. Wright’s Starquest universe that will feature several books by Paolinelli, Wright, and other authors in the months and years to come.

A fun science fiction adventure with a gruff, sympathetic anti-hero type lead. Sprinkled with a little dark humor, this book has a political plot that reminds me a bit of star wars, but without the space wizard thing.
The plot was full of twists and turns to keep the reader from ever being certain there could be a happy ending.
The performance was great. Now I will say I am biased there. The reader is a close friend whom served with me honorably in the Navy on a fast attack Submarine. Overall I am impressed that he could record an audiobook.
I enjoyed the story and would read a sequel, even without my friend performing it, although I hope he does.

Dan's performance was fantastic with a wide range of voices where at times i forgot i wasnt listening to a full cast recording!

First time with this series

Full disclosure, I know the narrator. I remember our group joking around saying he should read audiobooks.. I am so glad he did and can't wait for more. His voicing of the characters was fun and made the story even more enjoyable. One was so over the top it made me laugh out loud but overall the voices all seemed to fit the characters.

I was skeptical I would be interested in the story initially but by the end I was craving more. It's an engaging story and once I understood the universe I felt like I was in a space version of the spy thriller books I usually read.

I promised I would give an honest review and the only reason I gave a slightly lower rating is some of the recording audio differed from time to time. Either a different recording location or an edit. It didn't take away from the story but like I said.. I am being very honest.

Great job! I look forward to more from the Author and Narrator!