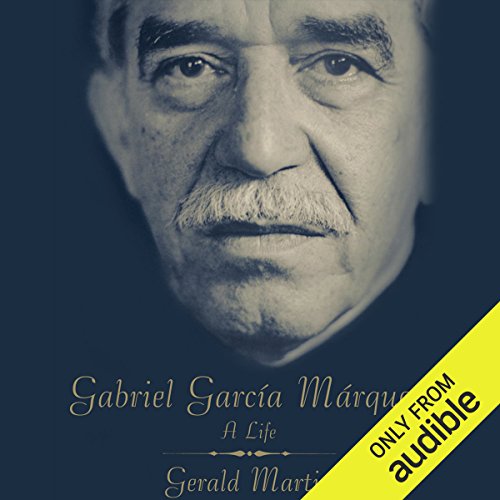 "Martin's control of his prodigious material in this first authorized biography of the great Colombian novelist García Márquez is astonishing.... Martin has come to praise García Márquez—whom he regards as the one writer who has been as artistically influential as the early modernists (in pioneering magical realism, now a staple in fiction from the developing world) and positively Dickensian in his popular appeal." ( Publishers Weekly)

In his novels and short stories, Gabriel García Márquez has transformed the particulars of his own life and the lives of his fellow Colombians into wondrous fiction. Now, we are given the chance to see the reality behind the "magical realism". While telling the story of the sloppily dressed, skinny young man who rose from obscurity as a provincial journalist to international fame as the progenitor of a new literature, Gerald Martin also considers the tensions in García Márquez's life between celebrity and the personal quest for literary quality, between politics and writing, and between the seductions of power, solitude, and love.

He explores the contrast between the writer's Caribbean background and the authoritarianism of Colombia, and in the 1980s, his extraordinary turning away from magical realism toward the greater simplicity that would mark his work, beginning with Love in the Time of Cholera. Over the course of 15 years, Gerald Martin interviewed not only "Gabo" himself, but also more than 300 other men and women, including Fidel Castro, Felipe González - the former prime minister of Spain - and several former presidents of Colombia; the writers Carlos Fuentes, Mario Vargas Llosa, and Álvaro Mutis, among others; García Márquez's wife and sons; his mother and siblings; his literary agent and translators; the people he considers his closest friends; as well as those who count themselves among his detractors. The result is a revelation of a life that is as gripping as any of the writer's powerful journalism and as enthralling as any of his fiction.

Who would you have cast as narrator instead of Sean Crisden?

Anyone who speaks fluent Spanish and English. Crisden's phonetic errors when pronouncing Spanish words used in the text were embarrassing. He also occasionally decided to pronounce words in English with a Spanish accent, like "Latin America" for example. While a few mistakes would have been completely understandable, the frequency with which Crisden made mistakes became a bit annoying.

More of what he said

This is mostly an amplification of Seth's review above. The biography itself is great, with a lot of insight into García Márquez, his books, and the Latin American world, which I knew very little about. I'd happily read it again, but probably not listen to it, because the narrator's pronunciation is an ongoing distraction. His French and German are atrocious, when García Márquez is in those parts of the world. The pronunciation is so forced that I would often have to spend a moment figuring out what he had just said, whenever he would name a French person or location. The Spanish is fortunately better (for someone like me, who never studied it), but even I periodically noticed things like his constantly mispronouncing Simón Bolívar's name. The English is generally OK, though with constant Spanish inflections. But even here there are occasional howlers, such as pronouncing hors d'oeuvre "oars devores," not close to either the English or French. With these constant irritations, it takes some work to settle into the story. Nonetheless, García Márquez led quite a varied and interesting life, and the bio has made me want to read his work beyond 100 Years of Solitude. Martin did his job quite well in creating a comprehensive and very readable account of the life and work, it's just shame that the experience is let down by the awkward narration.

The exceptionally strong content this biography is often undermined by the pronunciation errors of the narrator.
The biggest issue is where the narrator puts the accent, especially on names of people and places. This gets annoying
and we were surprised a native Spanish speaker didn't screen the recording to catch it. In spite of the narration, the book really held our interest and we recommend it. We liked very much the in-depth, thoughtful analysis of Marquez' work, and were fascinated by how closely connected the great author was to so many important events and people in recent history. If you are at all a Marquez fan, you should listen, or, to avoid the substandard narration, read the hard copy.

Before the Noble Prize Winning Book

I read an article in Vanity Fair about Gabriel Garcia Marquez's Nobel Prize Winning book, One Hundred Years of Solitude. The article written by Gerald Martin who was also his biographer. I felt I could not read the Noble Prize winning book without knowing more about its author.

Martin's book was hugely insightful and so very telling of the author & his life that I feel I am now ready to read One Hundred Years of Solitude with a much more understanding of the authors truth. Well done Gerald Martin!!!!