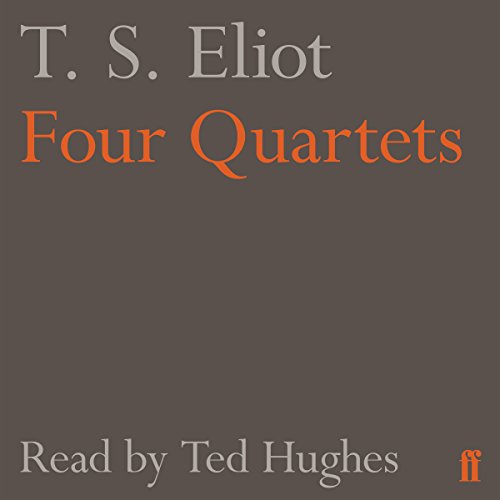 "Released from writing and research, I've been rereading old favourites, including T.S. Eliot's Four Quartets. Revisiting that sequence of poems - written just before and during the second world war - has made me want to dig through the piles of boxes and higgledy-piggledy books and retrieve my old, battered copy of 'The Waste Land', Eliot's 1922 masterpiece. I first read it years ago, as an awkward teenager, and loved it all - although, with hindsight, I understood painfully little. Elegiac, prophetic, mystical, a distillation of cultures and thoughts, it's as much a dramatic monologue, a play even, as a poem. Perfect for curling up on a sofa with a glass of wine and a flickering fire." (Kate Mosse, Guardian)

With its intricate structure and imagery, Four Quartets is the culminating achievement of T. S. Eliot's career. Its greatness is done full justice in this rendition by the late Poet Laureate Ted Hughes. Containing some of the most melodic passages in modern poetry, Four Quartets blends the religious, the philosophical and the personal themes that preoccupied T. S. Eliot. The four parts, 'Burnt Norton',' East Coker', 'The Dry Salvages' and 'Little Gidding', are interconnected by both theme and symbol. A poem of war, of Christianity, of literature and of history, Four Quartets speaks for a whole generation and is an enduring masterpiece.

Ted Hughes (1930-1998) was born in Yorkshire. His first book, The Hawk in the Rain, was published by Faber and Faber and was followed by many volumes of poetry and prose for adults and children, including Moortown Diary (1979). He received the Whitbread Book of the Year for both Tales from Ovid (1997) and Birthday Letters (1998). He was Poet Laureate from 1984, and in 1998 he was appointed to the Order of Merit.

The pinnacle of English-language literature

Deep, man! :-) Poetry at its finest. Ted Hughes' reading is the best I've heard. What a voice!