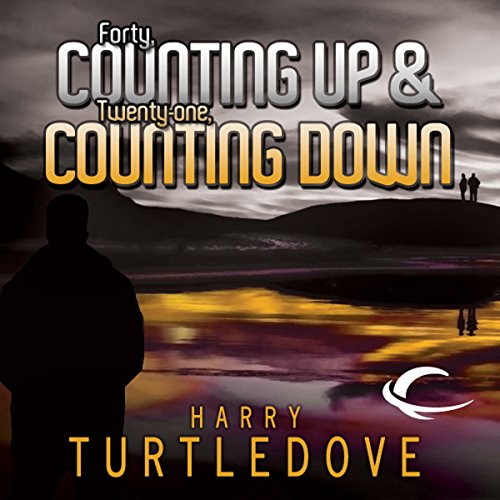 Harry Turtledove, the master of alternate history, turns to time travel in these two related novellas that range from fantastic to oddly familiar to eerily prescient.

In the Hugo Award nominee Forty, Counting Down, computer genius Justin Kloster travels to the past to stop himself from making a terrible mistake. But all actions have their consequences.

Then, in Twenty-One, Counting Up, Kloster's college life and romantic dreams are rudely interrupted when the 40-year-old Justin arrives from the future to save him from himself.

Familiar yet a nice twist

An aptly named title.. 2 short stories that are interlinked, yet can be approached on their own.

Both stories run over the "same" timeframe - but from two different perspectives.

The 1st story is about a man's journey at 41 years old, to help himself 20 years ago through time travel... the 2nd about his life as of 21 year old being approached from a man who claims to be himself, but from the future.

Part of yourself is extrapolating very "cliched" variants for the ending - but the twist is familiar yet surprising... won't spoil it, but do be patient.

Only 4 stars - because it would have been interesting from Megan's perspective!

Time travel genre is all about the same. But this one is well done.

Enjoyable, don't know if I need both viewpoints

"Forty counting down" was an entertaining and thought provoking story. But after reading it, I wasn't sure I wanted to hear the same story from the younger protagonist's point of view in "20 counting up"--the first story already explained what would happen to him.

This story is short and gets right to the point with not much time for serious plot or character development. It dives in headfirst to the life of the main characters and moves quickly enough to keep you interested. Not a serious page turner but not bad to listen to on a trip as I did.

Two related novellas that tell the same exact story from two different points view. The differing points of view of the same character at two different ages. They meet when the older version travels back in time to try to retroactively save his marriage. Short and to the point, Harry Turtledove, the master of alternative history, easily masters a tale of an alternative future, on the small canvas of the future of a single person.

It would be easy to say that there is only one character, Justin (there are also his two romantic interests, but they have small roles -- enough to impact Justin, but not enough to impact us readers). What makes the book fascinating is the differing characters of Justin at age 40 and 21, especially when they interact with each other. At first, you want to root for older Justin, intent on saving his marriage. But in an interesting twist, you discover that young Justin is also a sympathetic character.

The fulcrum on which most time travel fiction rests is the consistency of its internal logic -- how changing of the past affects the future. In the most satisfying versions, like The Terminator, changing the past forces the future to become what it was always supposed to become. Often, when the changing of the past creates unforeseen consequences for the future, consistency is the casualty, and the result is unsatisfactory, especially when the consequences are too broad. Turtledove bypasses this problem by making the story personal to Justin, changing his future, but not blowing that up to anything bigger. In the end, it is quite satisfying, both for Justin and for the reader.

This is so fun!

This is the second time I've listened to this book; it is that fun. Usually, if I listen to a book more than once, there have been many years in-between, but I only bought this book last year!😊 I love the two stories, the opposite sides of one guy, one version of him in his 40s and one in his 20s. Yes, the stories tell the same tale...but only sorta. There are subtle differences, and it is the subtleties that make this tale, I think. Some people, I know, didn't like this because they thought it was the same story told twice. I think that perhaps they didn't listen closely enough to hear yes, the sameness, but more importantly, these artful differences. These are what made me smile, hearing how something that might seem bad in one moment isn't necessarily so in the long run. A good lesson for us all. If only we all had a future self who comes back to "help".☺️

Time travel novella...40 year old travels back in time to change his life and meets his 21 year old self. Things don't work out as planned and life changes. Fun read...where can I find more by this author?

Would you try another book from Harry Turtledove and/or Victor Bevine?

This was my first Harry Turtledove book and I wasn't impressed. I don't think I'll try another.

I think I'll head back to the Game of Thrones series of books. George R. R. Martin is a master story teller and the voice talent is wonderful.

I felt like I was listening to a middle school boy read this. The inflections were terrible and there was little "acting" taking place.

If you could play editor, what scene or scenes would you have cut from Forty, Counting Down & Twenty-One, Counting Up?

My biggest problem with this story is that the guy travels back in time to save the marriage that went wrong. However, once he reconnects with the girl (future wife), he behaves in a manner that is completely opposite to his goals. He's stubborn, misguided, etc. Yes, you could argue that he's overcome with emotion by being back with her. But his mission was to make things better and she tells him very clearly and directly that he's not. Also, he pushes her to marry him NOW, but that's not necessary, since they will get married anyway. The marriage didn't fail because they got married too late, that marriage failed because things went wrong or got stale. So, his focus should have been in guiding his younger self to better manage the marriage as it matures, not to rush into marriage right away.