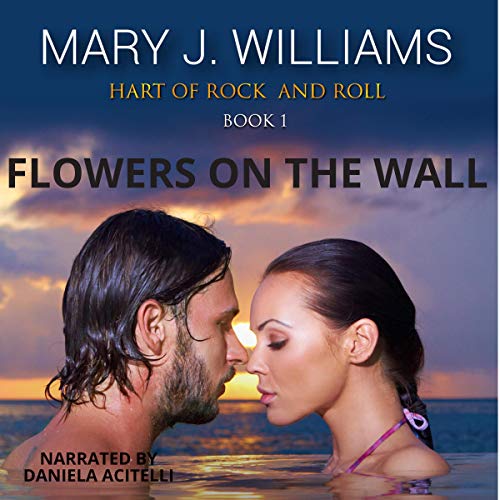 Flowers on the Wall

From the bestselling Hart of Rock and Roll series comes an epic stand-alone story about love, redemption, friendship, and music. Because, every great romance needs some Hart.

Ryder Hart came up the hard way. From his childhood, to scratching his way to the top of the charts. Every moment was a struggle. Now that he's at the top, nothing will take him down. Not even a secret so dark it invades his dreams and haunts his waking hours.

Quinn Abernathy's hunger for success is no less than Ryder's. If she wants to succeed in the highly competitive world of photography, she can't let anything, or anyone, get in her way. Until Ryder. He makes her long for more than she ever thought possible.

Music is Ryder's life. There isn't room for a woman like Quinn Abernathy. A woman who asks for nothing, but wants it all.

Definitely a love story! There were some steamy scenes, but the way they talked and interacted made it believable. Of course Ryder has some demons from his past, but don't most musicians? The narrator does a good job. She lets the emotion come through in her voice.

Ticked all my boxes

4.5 Stars for Flowers on the Wall ( Hart of Rock and Roll #1)
Audio Review
Mary J Williams is a new author to me and Daniela Acitelli the narrator is also new to me but that’s about to change because I really enjoyed listening to Flowers on the Wall. The narrator did a great job bringing the story and the characters to life and I found myself engrossed in Ryder Hart and Quinn Abernathy’s romance. A couple with plenty of baggage doesn’t make their journey easy, neither are looking for a relationship when they first meet but as they spend time together they realise maybe commitment is not a bad thing. This book ticked all my boxes, I was captivated by the story, I loved the characters and I’m looking forward to listening to the rest of the books in this series as well as checking out other works by this author and the narrator.

New author to me

Both the author Mary J Williams and narrator Daniela Acitelli are new to me. This was an entertaining story and the narrator did a good job bringing the story to life for me.
The characters of Ryder Hart and Quinn Abernathy were easy to relate to with a story line that had me invested from the first to the last chapter. Despite being attracted to one another, neither are fully prepared to commit. Both have baggage that they need to deal with, particularly Ryder.
I enjoyed the progression of their relationship, a good romance that was at times steamy.

A great start to a series.

I loved this story. The characters are well written and believable. The story flows with ease and keeps the reader wanting more.

Sexy story about a rock star and a photographer

I enjoyed other audio books by this author so I was excited to listen to this one. Ryder is a rock star who has a secret past that left his scarred and tortured. His band is composed of lifelong friends and his sister. Together they protect him when he's having a bad day. Quinn has been hired to photograph the last two weeks of their world wide tour.

Although Quinn and Ryder are attracted to each other, each has decided to keep their distance. Until they decide that they want to sleep together with no strings. Their relationship progresses to one of trust, but Ryder cannot commit because of his history.

The narrator does a wonderful job bringing this story to life. This is a great love story. It has very well written descriptive sex scenes. I highly recommend this book.

The kind of story that draws you along as the relationship between Ryder and Quinn develops despite the issues they both faced in childhood. Great additional characters from the band and I look forward to their stories too. The narrator did a fabulous job of bringing all the characters to life and I highly recommend this book.