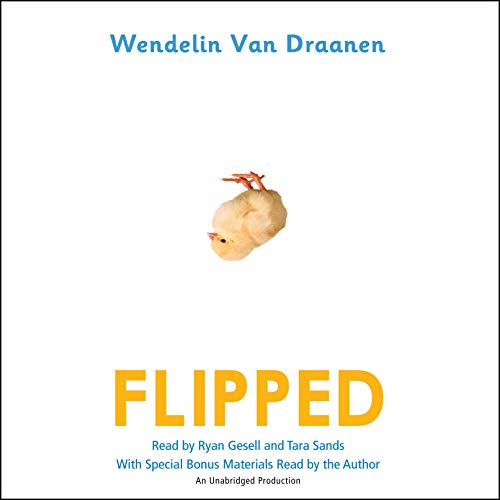 "Van Draanen has another winner in this eighth-grade 'he-said, she-said' romance." ( School Library Journal)
"We flipped over this fantastic book." ( The Chicago Tribune)
"With a charismatic leading lady kids will flip over, a compelling dynamic between the two narrators and a resonant ending, this novel is a great deal larger than the sum of its parts." ( Publishers Weekly)

This special audiobook of the classic he said/she said romantic comedy includes essays written and read by Wendelin Van Draanen.

The first time she saw him, she flipped. The first time he saw her, he ran. That was the second grade, but not much has changed by the seventh. Juli says, "My Bryce. Still walking around with my first kiss." He says, "It's been six years of strategic avoidance and social discomfort." But in the eighth grade, everything gets turned upside down: Just as Bryce is thinking that there's maybe more to Juli than meets the eye, she's thinking that he's not quite all he seemed.

Bonus content includes Wendelin Van Draanen on her sources of inspiration, the making of the movie of Flipped, and why she'll never write a sequel. Narrators Ryan Gesell and Tara Sands read a selection of the amazing fan mail Wendelin has received.

This was the perfect book to take you out of the crap on the news. Bravo to Julie, a girl who still knows how to stand for something

omg I started reading this book because my daughter was instructed to do so and I anted to see if she could understand it but wow I was completely in love with Julie and Bryce, Bryce's grand dad, omg this book made me laugh and cry I LOVEEEE IT ... I'll give it 1000 stars if I could....

A book from my childhood

I read this book when I was 10 years old. I loved it. I've been looking for it ever since. Now, at 30 years old, I've finally found it and it brought back so many feelings and emotions that I felt when I first read the book. And I am also truly saddened that there is not a part 2. I figured that if I ever found it again, that there would be a part 2 by now. Now, having just finished reading it after 20 years, is leaving me feeling sad and lost again. I just want to know what happens next?

An interesting listen due to the fact that it is the same story told from two different perspectives. The moral of the story is something that children should learn at an early age. Its ending is somehow fulfilling and unfulfilling at the same time.

My favorite Book of all time.

My favorite story😍I love everything. The plot, characters, and most of all the strong personality of each and every one of the characters. I would want a love story like this.

I understand the author wants us to imagine their future but dude...like why do this to us?

I had to read this book for a school project

I struggled to finish reading the book but then I discovered it on Audible today and finished it today too! Audible has changed my life!! Than you!!

A fantastic story of human character

The book itself is an excellent story that brilliantly explores the depths of character-building, but the audiobook makes it even better. The voice actors captured the spirit of the two main characters beautifully.

I read this book for the first time when I was in the fifth grade as part of the curriculum, and fell in love with it! I was happy to see it on audible as well!

Cute story, good characters, and an overall enjoyable listen! Highly recommend to anyone looking for a cute innocence in romantic stories.

you guessed it the book is better than the movie

This is a great tale of growing up in a simpler time but learning all the really important lessons. You just want to keep following their journey.