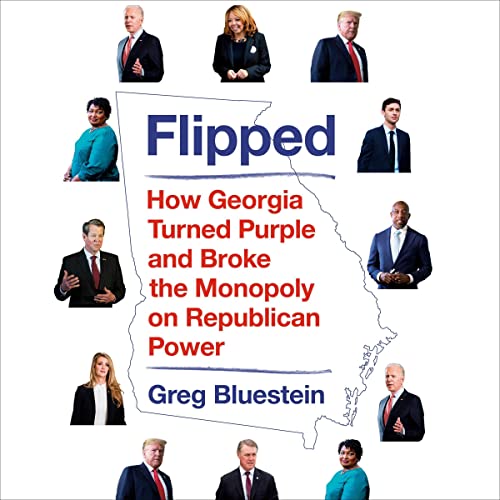 The untold story of the unlikely heroes, the cutthroat politics, and the cultural forces that turned a Deep South state blue - by a top reporter at The Atlanta Journal-Constitution.

Flipped promises to be the definitive account of how the election of Raphael Warnock and Jon Ossoff transformed Georgia from one of the staunchest Republican strongholds to the nation’s most watched battleground state - and ground zero for the disinformation wars certain to plague statewide and national elections in the future. The Atlanta Journal-Constitution reporter Greg Bluestein charts how progressive activists and organizers worked to help register hundreds of thousands of new voters and how Biden’s victory in Georgia may inform Democratic strategy for years to come. He will also chronicle how Georgia’s Republicans countered with a move to the far right that culminated in key state leaders defying Trump’s demands to overturn his defeat.

Bluestein has interviewed all the key figures in this election, including Stacey Abrams, Brian Kemp, Jon Ossoff, Raphael Warnock, and Kelly Loeffler, as well as their aides and operatives. Flipped will also feature such incredible characters as political-activist-turned-US-Congresswoman Nikema Williams; perma-tanned-baseball-star-turned-lieutenant-governor Geoff Duncan; and fast-talking New York strategist Jaclyn Rothenberg, who helped lead Biden’s triumphant Georgia campaign. This gripping narrative is framed within the cultural and political history of the Peach State.

Flipped tells a story that will resonate through the rest of the decade and beyond, as most political experts see Georgia headed toward years of close elections, and Democrats have developed a deep bench of strong candidates to challenge entrenched Republicans. There will be even more interest in the state going forward, when Stacey Abrams mounts a likely rematch against Governor Brian Kemp in 2022, seeking to be the first Black female governor elected in the nation’s history. Pro-Trump forces threaten to muster their own challenges against Kemp and others who stood against the president’s attempts to overturn the election, making Georgia ground zero for the fight over the soul of the Republican party - and, by extension, Trump’s political legacy.

With Flipped, Greg Bluestein has written the gold-standard of state-level campaign histories. The only improvement would have been if Greg had provided the narration.

Anyone interested in political high wire theater, riveting characters, and outstanding writing will love this book. I did.

the truth told from both sides. could have done without the narrator's attempts to intone the voices of different people, and his repeated mispronounciation of names. content wise it was excellent.