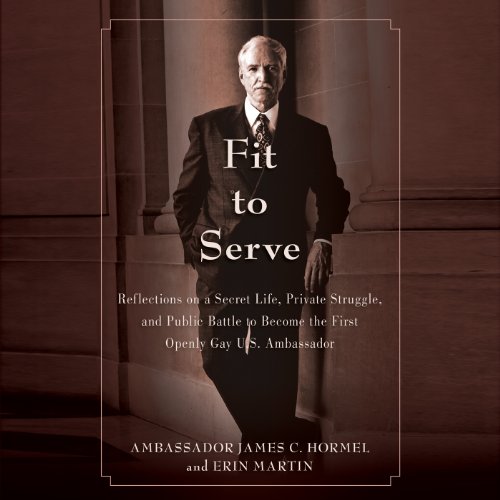 This is the memoir of James C. Hormel - a man who grew up feeling different not only because his family owned the Hormel “empire” and lived in a 26 bedroom house in a small Midwest town, but because he was gay at a time when homosexuality was not discussed or accepted. Outwardly he tried to live up to the life his father wanted for him - he was a successful professional, had married a lovely woman, and had children - but as volatile changes in the late 1960s impeded on the American psyche, Hormel realized that he could not hide his true self forever. Hormel moved to New York City, became an antiwar activist, battled homophobia, lost dear friends to AIDS, and set out to become America’s first openly gay ambassador, a position he finally won during the Clinton administration. Today, Hormel continues to fight for LGBT equality and gay marriage rights. This is a passionate and inspiring true story of the determination for human equality and for attaining your own version of the American Dream - life, liberty, and the pursuit of happiness without exception.

The life of an ambassador is likely to contain at least a few book-worthy features - excitement, political drama, access to international powerbrokers - and certainly the life of James C. Hormel has these in spades. But Ambassador Hormel is notable also for being the first openly gay U.S. ambassador, a fact that has added to his life challenges and triumphs recounted with insight and good humor in Fit to Serve: Reflections on a Secret Life, Private Struggle, and Public Battle to Become the First Openly Gay U. S. Ambassador. Narrator Richard Waterhouse, though much younger than Ambassador Hormel, brings an energy and a clarity to this autobiographical account of a life lived at times in secret, at times in conflict with itself, and ultimately with great integrity.

Fit to Serve against All Odds. A credit to all.

What a marvellous story. What an incredible man. Written with honesty and humour. Narrated with warmth and understanding. Have recommended it to all I see and hope everybody who may read this review will buy the book.

This book brought back a few memories. I was actually coming out during this time and had faced similar questions from my family and coworkers. I will reread this again.

A Step Forward For Gay Rights

From a very privileged family, he fought the stigma of being gay. He was very proud of his identity and his life. He has paved the way for the Biden Administration to appoint Mayor Pete to be Secretary of Transportation and the first Gay member holding a coveted Cabinet position.