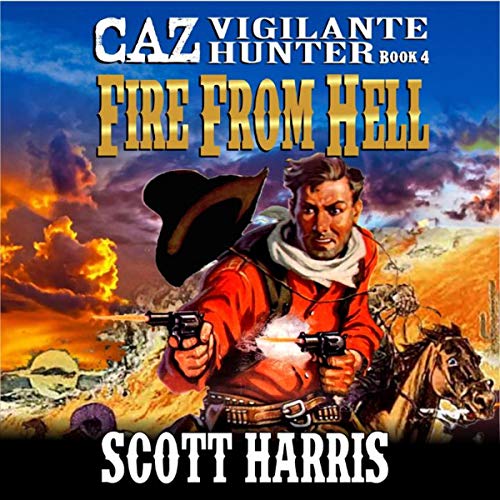 This is the fourth novel in a brand new Western series from Western adventure bestseller Scott Harris! With gun in hand - Caz blasts his way through the bad guys to bring peace and justice to the old West!

Caz faces his most challenging enemies yet, men willing to kill, not just the men they’re trying to destroy, but their entire families. At first it appears it’s going to work, but Caz rides into town, stops a bank robbery by killing the robbers and the story picks up speed from there.

Caz is the self-appointed judge and jury, operating outside the law, tracking down those law can’t - or won’t - find. And when he does find them, which he always does, there is only one sentence.

Growing up WATCHING spaghetti westerns, I was skeptical as to whether LISTENING to one would work for me. But after chapter 1, I was hooked! Harris has a writing style that spins a western yarn into a saddle blanket tapestry that leaves you anticipating the turning of the next virtual page! Narrator E Roy Worley’s grasp of the story and his ability to voice the complexity of characters is so phenomenal that he makes it sound easy! And his slight western/cowboy drawl is perfect for the setting of this story! His delivery makes the listener believe that he was actually there!!! A must listen!!!!