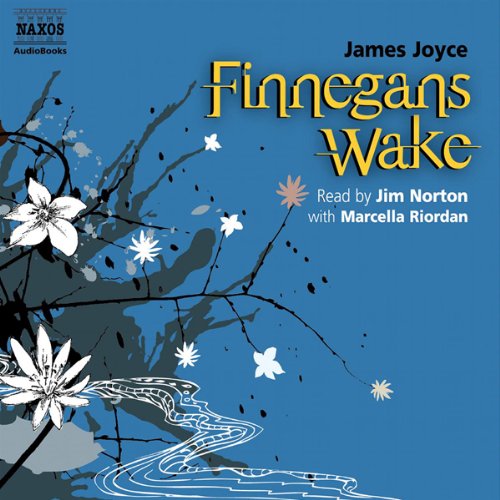 "Listening to Jim Norton and Marcella Riordan is a lot easier than trying to read the book." ( The Guardian)

Finnegans Wake, the greatest avant-garde novel of all time, was first published 70 years ago - and people are still trying to work out what it is about. There is Humphrey Chimpden Earwicker - aka HCE (Here Comes Everyone) - and Anna Livia Plurabelle, but also Finnegan the hod carrier (or was he a giant?), whose wake is the subject of the book. This is a masterly reading of the abridged version, with copious notes aiding comprehension.

awesome<br />this is the best audio version by far

if you want to understand and enjoy FW this is a must have.

FW is the craziest deepest and funniest book ever written....satirical in. a warm Irish way......totally existential and so human.

without this audio version you'll struggle to follow the book....enjoy!

Then again's a snake. Ich bin.

An easier read when listened to than read without listening. C'est la vie! 終わり。Sixteen five one nine.

What made the experience of listening to Finnegans Wake the most enjoyable?

Jim Norton is an incredible narrator. His grasp of the nuance and movement of this incredibly obtuse and almost nonsensical piece of literature grants it meaning far beyond that which I could have picked out on my own.

It is a shame that it is abridged; I understand the immensity of the task if it were to have been unabridged and appreciate the already impressive work done here, but I could listen to Jim Norton forever. On that note, too, I was not extremely pleased by the interruption by Marcella Riordan, though it was likely a choice made for the integrity of the literature.

My Take On The Wake (with Audible & Kindle)

I've been a long time James Joyce fan but always felt too intimidated to attempt 'The Wake'. When I saw the audio version on Audible I decided to listen and decide whether I wanted to attempt the full book. And I do! The well acted reading is illuminating and I was able to enjoy the rhythms and musicality of the words as I believe Joyce intended. I would recommend this audio book to any one who lives poetry or James Joyce. My only criticism of the recording would be the 'sign off' at the end, this makes it difficult to skip back to the beginning straight after listening and preserve the circular nature of the novel. Well worth a listen though!

Where does Finnegans Wake rank among all the audiobooks you’ve listened to so far?

Among the top five.

The way the reading helped to bring the many levels of sense to the surface through sound.

the final part when the river joins the sea and the cycle begins all over again.

Into The Deep Darkness of the Dreamnight

Frustrating. Brilliant. Opaque. Organic. I had always wanted to read ”Finnegans Wake”. I had had it in my bookshelf for ages, and I had started reading many times. Nothing really came of those attempts. Then, in early 2014, as if life wasn’t full of many other exciting “projects” already (fathering three little girls just might make the list), I thought I’d try to read it all, finally. The shocking thing is that I did.

To enjoy ”Finnegans Wake,” or to try, one may have to relinquish some convictions and go down a road not many are accustomed to. To willingly lose control. That reading is about making sense. Do I have to understand everything I read to enjoy what I read?

Joyce’s dreamworld works in the mode of the nightly slumber, since incoherence and nested narratives are in part what make dreams dreams. And, in the words of Jorge Luis Borges, what is literature but “guided dreaming”? And, by extension, what is the ”Wake” but the most elaborately constructed dream?

Part of the “point” of the book is that endlessly it spirals deeper into itself. When there is no beginning or end, merely a point in which we join the flowing river of word-images, where are we going, really, and where are we coming from? I’m really not supposed to bother. I’m supposed to breathe in the nocturnal air. This, for me, is an endlessly encouraging thought.

This doesn't mean it's not terribly frustrating at times, since I’ve been educated to read stories, not ”Finnegans Wake”. But do I have to enjoy everything I like all the time? It's not only once that I wondered why this couldn't have been a tale of 100 pages instead of 628. But I'm glad it's not, since its effect wouldn’t quite be the same. In the words of Harold Bloom, ”devote an inordinate part of your lifetime to ’Finnegans Wake’, and it will reward your labors; that is its design." Also, in the words of Adalaine Glasheen, ”’Finnegans Wake’ is willfully obscure. It was conceived as obscurity, it was executed as obscurity, it is about obscurity." I love plunging into the ”Wake” on a random page, often reading out loud. No other work really conjures up such magic when read aloud.
Considering that ”Ulysses” ended with Molly falling asleep, this is the logical next step. There is no turning back. What could possibly follow ”Finnegans Wake”? It will eternally spiral into the deep darkness of the dreamnight. Its path, unlike Dante’s, doesn’t resurface in light.

As such one could say ”Finnegans Wake” is one end to the idea of the novel itself as we know it. Not that there’s nothing meaningful written after it, but rather, there’s hardly anything that can retrace it and go further. It has shown us the limits of darkness, the ultimate culs-de-sac. Perhaps, like with poetry, it's best revisited in bits here and there, working with the passages that have struck the deepest chord. It's an endless, cyclical work after all, so it doesn't really matter where one enters and exits.

This is where this excellent abridged audio production comes in. At first I shunned it because I had to have an unabridged version. But after getting over myself, perchance swayed by my own words in the preceding paragraph, I can say that this recording is so precious it’s beyond measure. If they were to make an unabridged version, I’d be among the first to flock the virtual streets to get it. But if they don’t, I don’t mind. This, at about five hours, is a tour-de-force blastoff that shows how much fun reading ”Finnegans Wake” aloud is, and how enjoyable it is to hear it being read to you. It’s the first spiraling steps into the abyss.

And, really, is there a pair better qualified to read this than Mr Norton and Ms Riordan? I will have to listen to ”Dubliners” and ”A Portrait of the Artist as a Young Man” soon, since I couldn’t imagine anyone doing Joyce better than Jim Norton. I mean, really! His voice is bliss! And considering I’ve been reading ”Wake” to myself (my idea of having fun, you know, really cranking it up, baby!), it’s electrifying to hear his rendition. I think this will be the recording I’ll listen to when I want to clear my mind and ready for the night. Can I give this ten stars instead of five, just to prove a point?

”Finnegans Wake” is a beautiful poem, a nightsong of immense magnitude after which it's quite impossible to see the world, and dreams, and literature, the same way as before. This audio production is a testimony to its power, and both a wonderful introduction for new adventurers and a steadfast eyeopener (or eyeshutter) for those who’ve been lurking in the dark a bit longer. If Mr Norton and Ms Riordan ever decide to record a full, unabridged version, it could top this, but otherwise what we have is a wondrous treasure I will be listening for many years to come.

Don't be put off!

After listening to and thoroughly enjoying the Naxos editions of Dubliners, Portrait and Ulysses on Audible, I was initially put off buying this audiobook as it is abridged. However, as I haven't been able to find an unabridged recording of Finnegan's Wake anywhere, I decided to give it a go. Having listened to this audiobook I see that it is a good introduction to this notoriously difficult book. It is read beautifully by the same narrators as Ulysses.
Its a shame that there isn't some sort of explanatory guide to Finnegan's Wake available on Audible to go with this, such as Anthony Burgess' "Here Comes Everybody" or a lecture series such as the Great Courses "Joyce's Ulysses" series which I found really helpful in understanding Ulysses in greater depth.

Because of the nature of the Wake it is better to read it the first time; not all the pins etc work aloud. On the other hand, sometimes it makes more sense aloud as it helps one see rhythms which aren't always obvious on the page.

A work of art. I tried to read this book, but failed due to its sheer complexity.
Having it in audio book form is a gift.
The story is hard to follow due to the 'Joyceishness' but this doesn't matter, it's a great listen.
Performance of narration is stellar.

I use this book as a form of meditation, one listens to this book only in the present, as each phrase flows by and is immediately replaced by another that consumes your attention.
It is relaxing, funny and bizarre.

Brilliant performance of wonderful work of literature. I could not have read it without listening at the same time to Jim Norton and Marcella Riordan's inspired reading. The book is funny, witty, and aesthetically engaging. The nonsense text takes on meaning as the he reader gets used to the rhythm and style of the prose.

Jim and Marcella do the most sublime reading of Joyce's masterpiece. Brings everything to life.