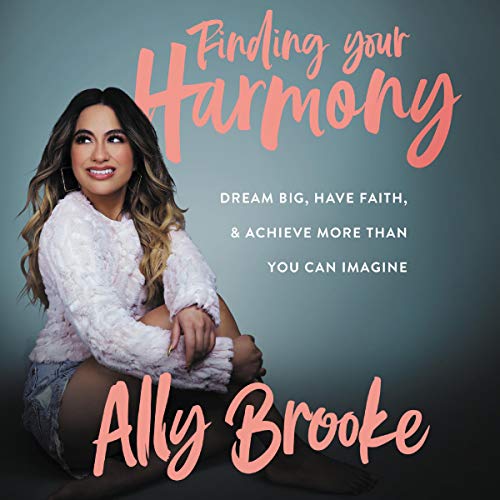 In this moving and inspirational memoir, singer Ally Brooke recalls her journey to fame and reveals how she has remained true to her beliefs through her most difficult moments. Finding Your Harmony takes listeners behind the scenes of her proudest musical accomplishments, solo success, and her time on Dancing with the Stars.

Ally Brooke burst onto the music scene as a member of Fifth Harmony and quickly became a fan favorite with her infectious positivity and approachable attitude - not to mention her incredible voice. Following the band’s meteoric rise to fame, she embarked on a solo career, releasing her own hit singles, joining the 28th season of Dancing with the Stars, and showing people everywhere the rewards of hard work and faith.

Now in this moving and inspirational memoir, Ally opens up about the experiences that led her to the spotlight, offering lessons from the heart and revealing how her tight-knit Mexican American family has helped her to live fearlessly since she was first catapulted into stardom. Tracing her success from its beginnings in San Antonio, Texas, Ally details the passion for music that took hold of her at a young age and how with the help of her family she pushed herself to achieve her dreams, no matter how impossible they seemed. While her rise to fame was rapid, it wasn’t always smooth, and Ally candidly discusses the challenges she faced along the way, sharing how she navigated tough moments by staying true to herself and her beliefs.

Opening up about her journey since Fifth Harmony disbanded, Ally recalls her tireless efforts to make music on her terms, charting back-to-back singles in the top 40 and amassing more than 200 million collective worldwide streams. She also delves into her time on Dancing with the Stars, demonstrating how she conquered her fears and insecurities on her way to a top-three finish and further established herself as a role model for young people the world over.

Infused with the positive approach to life and spiritual openness that have fueled Ally’s journey, Finding Your Harmony uses her stories to help others follow their inner voices - even when the outside world makes it hard.

Wise and grounded, Finding Your Harmony is a fascinating glimpse into the life and heart of one of popular music’s rising stars.

just what I needed during these difficult times

I loved the message behind her story and to remember to have faith when times get difficult.

Ally Brooke shared her life story with the reader, which is felt even more through hearing it in her voice. You could identify parts where she struggled to even share the story and it makes me appreciate the vulnerability even more! This is a great read that sheds light on the entertainment industry and how important faith can be when looking for that hope. I’m glad to own a physical copy to re-read on top of the audiobook, highly recommend!

Ally has always been a huge inspiration to me back when she was in Fifth Harmony. After listening to her story, I love her even more. I admire how open she is through her struggles. I’m not in the industry but I definitely could relate to a lot of the things she went through. I cried so hard in one chapter, she narrated with a lot of emotions. I cried when she cried and laughed when she laughed.

The Most Beautiful and Inspiring Book I’ve Ever Read

I don’t think I’ve cried so much all year. But these tears, are proud tears; happy tears. I’m so proud of Ally and how far she’s come. I don’t even have the words to fully explain. It means so much to me that she decided to share her story. I feel like I know her so much and I feel so connected considering we have so much in common. To be a fan of hers is a pleasure and something I’m proud to say. She’s my hero and one of my biggest inspirations and nobody can ever tell me different. I love her.

I really thought we knew ally but there was so much more we didn’t know until now after reading his book. She has gone through so much and deserves the world. I WILL KEEP SUPPORTING ALLY MORE AND MORE. Ally was so vulnerable thankyou for sharing your story queen. HERE’S TO MORE HAPPY HAPPY MEMORIES AND SUCCESS!! You got this queen.

Such an inspiring story!

Ally Brooke’s Finding Your Harmony dives deep into the singer’s past endeavors, and all the hardships she faced. Ally has inspired me, and many other readers, to be true to yourself and never take s*** from anyone!

What a journey this book has took me on. I felt the emotions of her story so bad I love you ally

Love her music and the time in fith harmony and even her solo now!! I feel bad for her to have been through that much. But the industry is and will be a though place to be and get criticism! So now my review on the book; Gurl I love you but, it was hard to listen to because most of the book she spoke in a voice that was sad to listen to... Like she needed to cry the whole book (what can be thing) but the uplifting parts were when she told happy things in a normal voice... And then switched to sad voice the whole time... I stopped after the fifth harmony chapter... Sorry, do support her music though...