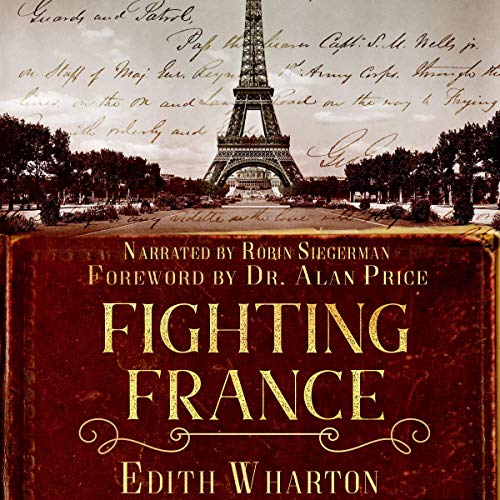 Fighting France: From Dunkerque to Belfort, is a compilation of articles Wharton wrote for Scribner’s Magazine and the Saturday Evening Post, reporting from the Western Front during WWI.

Living in Paris, she was trapped in France when travel became impossible after Germany declared war and French mobilization began. She was one of a number of expatriate American writers living there, primarily women, who became involved in war charities during the opening months of the conflict, years before the United States abandoned its official policy of neutrality. Wharton was a vigorous and passionate supporter of the French war effort, and was part of the American expat community that felt humiliated by the United States’ lack of support. She was determined to use her considerable influence at home and abroad to persuade Americans to support relief efforts for the tragically displaced and starving Belgian refugees, and to use whatever means she could to shed light on the disaster unfolding in Europe that threatened the globe.

To that end, she used her considerable personal connections, among whom was Teddy Roosevelt, to convince General Joffre, Commander-in-Chief of French forces on the Western Front, to allow her to tour the Front to deliver eye-witness accounts of the devastation as war reports to the US. She was the first civilian and only woman allowed to do so; an act of astonishing courage and daring for the time.

Her descriptions of being mere feet from enemy trenches, visiting decimated towns throughout France, experiencing enemy bombers buzzing overhead and how her beloved France coped with spirit and grace during years of deprivation and tragedy, gives us an extraordinary, articulate and compassionate first-hand account of the effect of “The war to end all wars” from one of America’s finest writers.