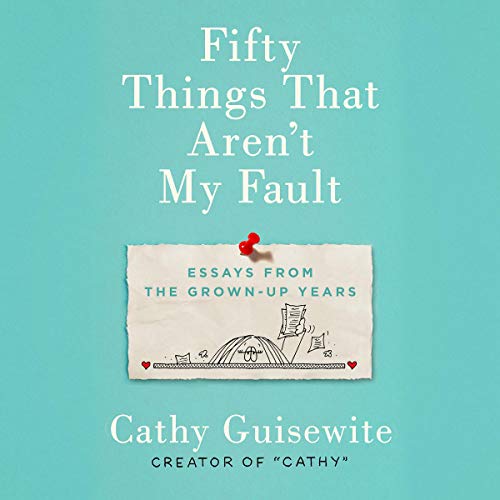 One of PopSugar’s “Buzzy Books to Read This Spring”

"The creator of the iconic cartoon 'Cathy' comes out of retirement to make us laugh, cry, and remind us - with humor and pathos - that yes, we all do stupid things yet live to tell the tale." (O, The Oprah Magazine)

"Cathy's appeal lay in the fact that she spoke openly about the things that women weren't supposed to talk about: anxiety and insecurity and frustrations. She was a touchstone for neurotic girls and women of all ages.... [Her] forthcoming essay collection is as full of humor and pathos about life's many mundanities as you'd want it to be. Only this time, there's no comic strips, it's all Guisewite's voice - reliably sane, sparkling, and suffused with the same warmth and wit as we've all come to expect. What a treat." (Nylon)

“Equally parts warm, laugh-out-loud funny, and charming. Guaranteed to make you fall in love with Cathy all over again.” (PopSugar)

From the creator of the iconic "Cathy" comic strip comes her first collection of funny, wise, poignant, and incredibly honest essays about being a woman in what she lovingly calls "the panini generation".

As the creator of "Cathy", Cathy Guisewite found her way into the hearts of fans more than 40 years ago and has been there ever since. Her hilarious and deeply relatable look at the challenges of womanhood in a changing world became a cultural touchstone for women everywhere.

Now, Guisewite returns with her signature wit and warmth in this debut essay collection about another time of big transition, when everything starts changing and disappearing without permission: aging parents, aging children, aging self stuck in the middle.

With her uniquely wry and funny admissions and insights, Guisewite unearths the humor and horror of everything from the mundane (trying to introduce her parents to TiVo and facing four decades' worth of unorganized photos) to the profound (finding a purpose post-retirement, helping parents downsize their lives, and declaring freedom from all those things that hold us back). No longer confined to the limits of four comic panels, Guisewite holds out her hand in prose form and becomes a reassuring companion for those on the threshold of "what happens next". Heartfelt and humane and always cathartic, Fifty Things That Aren't My Fault is ideal for mothers, daughters, and anyone who is caught somewhere in between.

Fifty Things That Aren't My Faultに寄せられたリスナーの声

Meh! this was just ok.

Naration was not captivating, no real inflection. stories did not peak my interest. Was recommended this title since I loved Southern Lady Code. I couldn't relate to the stories.

Not about work life balance or careers at all

I thought this book would be about the career of working as a female comic strip writer and what that was like for Cathy. However it is all about her personal life, a life I could not relate to. The 50 things are the “ small stuff”, stuff she let constantly bother her throughout her life. Throughout the entire book I kept thinking, don’t sweat the small stuff, don’t sweat the small stuff, as I cringed as she constantly toiled over what people thought of her and her experiences at malls shopping. Maybe that was the point of the book, to let people know how silly it all sounds?
I did think it was cool her mom was part of the audible book even as she poked at her and slightly made fun of her.
I’m a thirty something working professional and just couldn’t grasp this book, I almost didn’t finish it. Maybe this book would be better for someone who is really interested in shopping for clothes, shoes, linens, and possibly dealing with a hoarding situation.

Thank you Cathy, You’re Not Alone!

Ladies- if you are in between teenagers and aging parents, this book is for you. These essays are so true and helpful. It made me laugh, smile and feel like I was sharing time with my best friend. Sometimes, I think that I’m the only one thinking some of the same things in this book. It is nice knowing we are not alone!

Such a wonderful listen

Fans of Cathy Guisewhite will truly appreciate this. It is such a wonderful distraction from the daily madness that surrounds us. It’s wise, witty, funny, sad and endearing. I loved every word.

I thoroughly enjoyed this book! I’m 45, right in the middle of everything. The things I have to look forward to will be easier now that she has mapped it all out with humor and wit! I can so relate to all the things past about raising kids and being a working woman, lifting my spirits where I was feeling regret and sadness about all the mistakes and ‘should haves’.
She redeems you as you read along with her adventures in life and it was such a blessing! It was such a neat bonus for me to connect the dots of growing up in Michigan myself. I remember seeing Cathy in the ‘funnies’ too! Coincidental? Maybe! But I think I really needed to read this book. I want all my girlfriends, my sister and my mother to read it for all the laughs and encouragement I received reading this book! What a gift! Thank you!

This book is almost identical to my life- living in the sandwich generation. Literally laughed out loud while I was listening to it. Really enjoyed the essays.

This is one of the best books I’ve ever read. Thank you, Cathy and Anna, for sharing all of your experiences and truths. I laughed. I cried. I have such a lump in my throat missing my own parents and understanding more that I’m not alone in my feeling of loss as I grow older. Moms unite! Daughters unite! Let’s stop being so hard on ourselves. ❤️SWF

This Book Is Funny!

Having been a fan of the “Cathy” cartoon, and of her many appearances as a guest on Johnny Carson’s Tonight Show, I was pleased to find this book of essays written by Cathy Guisewite. She retired from her syndicated comic strip career some time ago, and where’s she been? Apparently, she took time off to do the mom thing. Good for her! And she’s been thinking and stewing, which is good for us.

This book is really funny, with enough one-liners that Cathy should think about becoming a standup comedian. The book is also deep and intellectual with moral objections and arguments on a range of topics related middle aged women: rearing children, building a career and a family, and, along with her sisters, caring for 90 year old parents. The issues in this collection are definitely those of an affluent white lady, but she owns it. Even the rich white lady faces job setbacks, heartbreaks, personal anxieties, and sees the objectification of women in the clothing choices available at the mall, to be super specific.

Cathy Guisewite gets personal in this book, too. She reveals her humble heritage, as granddaughter to an illiterate Slovakian country bride whose own daughter, Cathy’s mom Anna, taught her to sign her name when Granny was about 28. Cathy’s mother, first in her family to attend college, majored in journalism and worked for a short, thrilling time before marriage writing ad copy for a midwestern department store. Cathy marvels at her mom’s modesty, and discovers her successful ad man dad was ghost-written by his young wife for some time when he started out in advertising. Cathy muses on the evolving roles of women and has a great chapter on how easy she thought it would be to work around her infant daughter’s schedule. Cathy’s relatable frustrations with her occassionally obnoxious grown up daughter (as only daughters can be with their moms) mirrors her own interactions with her mother Anna. (Her mom reads the mom parts in the book, too, which is a treat.)

The whole book is so enjoyably surprising, with quiet or sometimes very loud revelations about all manner of things which Cathy needs to get off her chest. Polite Detroit Cathy allows pissed off Cathy to cork off about the ridiculous numbers of styles and sizes of jeans for women. She goes on a funny rant about women’s lingerie and why there’s no sexy, silly equivalent for men. My favorite essay was about downsizing her parents’ house and all of the happy memories that are evoked through their possessions. She has a wonderful essay about her aging father and all the things he taught her and her sisters with his capable hands. And in between trips to visit her parents in Florida she has lunch with a girlfriend who somehow unwittingly but confidently breaks all the BFF rules, leaving Cathy apoplectic by meal’s end. Lots of Cathy’s observations had me laughing and crying in the same paragraph.

I highly recommend this book of essays for many reasons, not the least of which is its funny! Cathy writes thoughtfully and sardonically about motherhood and daughterhood, about treating others with respect and is still rotating her self-effacing gaze from herself to the rest of us and back again.

Did I write this book?

Either I wrote this book without knowing it or Cathy tapped my sister's & my phone conversations!!! Great job, Cathy. I cried, I laughed out loud, I mourned. Thank you to Cathy & her family for sharing their lives with us. I'll miss them!

I can't believe it was actually a book!

It was just a sequel of nagging. As a women, feminist and book lover I felt violated :/