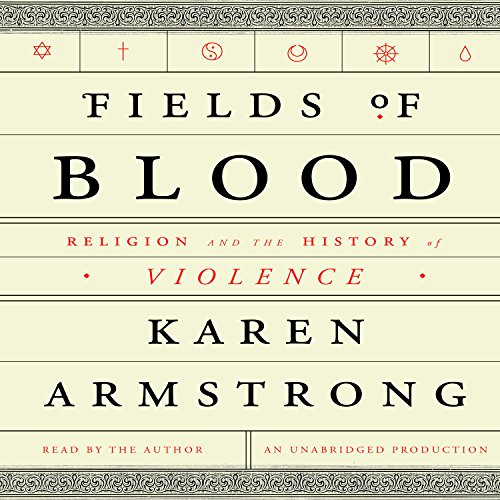 "A well-written historical summary of what have traditionally been viewed as "religious" wars, showing convincingly that in pretty much all cases it was not so much religion as it was political issues that fueled the conflict." (Augustine J. Curley, Library Journal (starred review)
"Provocative and supremely readable…. the comparative nature of [Armstrong's] inquiry is refreshing…. Bracing as ever, [she] sweeps through religious history around the globe and over 4,000 years to explain the yoking of religion and violence and to elucidate the ways in which religion has also been used to counter violence." ( Publishers Weekly (starred review)

From the renowned and best-selling author of A History of God, a sweeping exploration of religion and the history of human violence.

For the first time, religious self-identification is on the decline in American. Some analysts have cited as cause a post-9/11 perception: that faith in general is a source of aggression, intolerance, and divisiveness - something bad for society. But how accurate is that view? With deep learning and sympathetic understanding, Karen Armstrong sets out to discover the truth about religion and violence in each of the world’s great traditions, taking us on an astonishing journey from prehistoric times to the present.

While many historians have looked at violence in connection with particular religious manifestations (jihad in Islam or Christianity’s Crusades), Armstrong looks at each faith - not only Christianity and Islam, but also Buddhism, Hinduism, Confucianism, Daoism, and Judaism - in its totality over time. As she describes, each arose in an agrarian society with plenty powerful landowners brutalizing peasants while also warring among themselves over land, then the only real source of wealth. In this world, religion was not the discrete and personal matter it would become for us but rather something that permeated all aspects of society. And so it was that agrarian aggression, and the warrior ethos it begot, became bound up with observances of the sacred.

At a moment of rising geopolitical chaos, the imperative of mutual understanding between nations and faith communities has never been more urgent, the dangers of action based on misunderstanding never greater. Informed by Armstrong's sweeping erudition and personal commitment to the promotion of compassion, Fields of Blood makes vividly clear that religion is not the problem.

"Armstrong again impresses with the breadth of her knowledge and the skill with which she conveys it to us." (Ray Olson, Booklist (starred review)

Makes you wonder if Karen's voice, and the fact that she turns on its head some conventional wisdom are behind the criticism of this audiobook. It all fits for me and reveals her usual and remarkable scholarship. Prepare to see things differently. That's why we read, isn't it?

While I'm no Christian, I appreciate Armstrong's history-based defense of her religion in this book. She is a masterful story-teller, able to weave the anecdotes of history in with a larger narrative in a way that is both historical and philosophical; She teaches you history while giving you something broader to think about. And I appreciate that she provides an adequate and non-judgmental overview of the opposing viewpoint. That said, she elides some pretty gaping holes in her argument, and much of the key evidence for her thesis was cherry-picked. It is still a book well worth reading, and I had a lot of fun arguing with it as I went along - to me, that's the mark of a great book.

Armstrong's well researched and broad overview of the history of religion and violence provides a powerful argument against the New Atheist saw that religion is the greatest source of evil. Instead she shows that violence is a complex response to external causes.

Based on a careful appreciation of the origin and development of religious beliefs, Karen Armstrong makes the argument that religion is not inherently violent. Neither, she points out, the separation of religion and state contributes to an era of peace. Violence, she argues, springs from the desire of tribes and states to accumulate wealth (lands, goods and money). Religious beliefs, history shows, counterbalance these aspirations and provides an alternative meaning to human life, giving direction to human endeavors. In this book, Karen Armstrong gives special attention to the development of religion in the west, mostly to the interactions of christianity and europeans states. The story is fluent and well researched.

Another fascinating book from Karen Armstrong

Few writers should read their books, but Ms. Armstrong is one who can and should. No one writes as compellingly about religion or seems more knowledgeable. As an atheist, I agree with her main contention that religion is not the source of war, that different religions can be bent for both peaceful and violent reasons. Her scope is tremendous, her scholarship is thorough, her style is engaging and clear. Fascinating as usual.

This is the second book I have read by Karen Armstrong. Both books did an unbelievable job of documenting the history that has lead to our current state of affairs in terms of religion. I found both books to also be so dense that they are at times very difficult to get through. There is simply so much information to try to get across in a short amount of time that Karen is forced to make each chapter packed to the brim with examples and context so that the reader can understand the message that she's trying to get across in each section. I walked away with this book with a newfound appreciation for history, and what it can teach us. I wish we learned stuff like this in School. It not only helps us understand so much about the past, but why the present is the way it is. As I was growing up, my history teachers always used to tell me that the reason we learned history was to prevent the mistakes of the past, but I never got even a fraction of the value out of those classes as I get out of a book like this. thank you so much for your work Karen, it's incredibly valuable. my only suggestion would be to try and make it a little more accessible. this book is a serious commitment, as was the other book I read by Karen. It takes a tremendous amount of time thought and energy to get through one of these books because there are no easy ideas and each historical example is so nuanced and complex that it requires a tremendous amount of concentration. in the introduction of Karen's other book that I read, the case for God, she addresses this concern directly, saying that this is not an easy book and religion is not an easy topic to discuss. I appreciate that, but I think one of the reasons we find ourselves in the state we are today is because we are having trouble communicating these complex ideas in a way that is accessible to the masses, and as a result we get an over simplified picture of the world and it's events. End of religion, for that matter so that would be my only request. that being said, you're up for the of reading this book, you will come out the other side as a better person.

Now we know WHY we are making enemies faster than we can kill them. The author shows how it all makes sense.

A must read for understanding world conflict today

This book provides a much needed perspective on global conflicts, both past, present and to consider in the future.

I think every member of Congress and President Obama should be required to read this book. I consider it one of the most important books I've read in many, many years.

Karen Armstrong is the Grande Dame of socio-religious scholarship in our era. With calm, cool, and irrefutable research she presents the single most coherent and effective case for religion as NOT being the source of the planet’s violent ills.