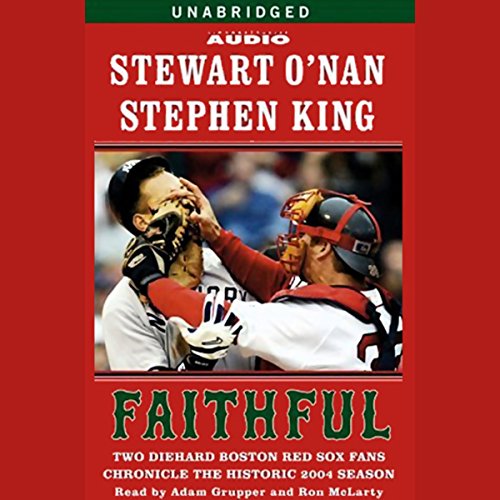 "Of all the books that will examine the Boston Red Sox's stunning come-from-behind 2004 ALCS win over the Yankees and subsequent World Series victory, none will have this book's warmth, personality, or depth....King and O'Nan are, admittedly, more eloquent than average baseball fans (or average sportswriters, for that matter), and their book will provide Red Sox readers an opportunity to relive every nail-biting moment of a memorable season." (Publishers Weekly)

Early in 2004, two writers and Red Sox fans, Stewart O'Nan and Stephen King, decided to chronicle the upcoming season, one of the most hotly anticipated in baseball history. They would sit together at Fenway. They would exchange e-mails. They would write about the games. And, as it happened, they would witness not only the greatest comeback ever in sports, but the first Red Sox championship in 86 years as the team put '86 behind them and eighty-sixed the Curse.

A-Rod. Schilling. Sheffield. Foulke. The hot stove league was smoking. In April, the Sox took six of seven from the New York Yankees. They led their division through May, but June was a disaster. Then Nomar went to Chicago, Varitek shoved A-Rod, Billy Mueller proved to be a Yankee killer, and this team never looked back, logging an astounding August and a solid September to claim the wild card. In the playoffs they killed the Angels, then ran into those damn Yankees. Who saved the pennant race? David Ortiz. Who hit the only grand slam? Johnny Damon. Who's your daddy? Papi is. Down three games to none, down to their last three outs, the Red Sox rose from the dead to make history. Nothing left to do but sweep up. What began as a Sox-filled summer like any other is now a fan's notes for the ages.

Ok, I admit it, I'm not really a big baseball fan. Football is more my style as it is much more fast-paced, and there aren't generally big lulls in the action like one gets in baseball. That being said, I will admit to turning on quite a few Red Sox games and watching them play it out - especially during the playoffs - and biting my nails and cheering for this team that has been drowning in a "curse" for decades. I can relate to the mood swings of Red Sox fans since I'm from Chicago and have watched the Cubs suffer the same fate for years.

When I first started listening to this book, I felt a bit like a moron because I wasn't as educated in the sport as long-time fanatics, and I only knew a few players by name. I had a hard time keeping track of what team was doing what as the diaries of the games were being read. BUT, I didn't give up on the book, and I'm very glad I didn't. As it moved along through the season, the commentary and heartfelt excitement and anguish comes through from these two die-hard fans. A lot of it is very amusing and entertaining, and even if you're not a baseball fan, you WILL be caught up in this.

Stephen King is a master writer with a great sense of detail and a knack for coming up with the most hilarious commentary. O'Nan is a very detail oriented compliment to him in this book.

If you like sports AT ALL or if you can relate to the drama of what a sports fan can endure, you'll love this book. You may even consider watching a little baseball next summer - I know I will.

The narrators are FANTASTIC which is SO important when listening to any book. Ron McClarty is one of my faves anyway, so I was thrilled he was involved with this. Do pick up "Faithful" and forget the nasty weather that winter brings. You will smell the summer wind and hear the crack of the bat, and you will be.. faithful.

I listened to <B><U>Faithful</U></B> for one reason, probably the same reason you will hear this great chronicle of the 2004 Boston Red Sox. The reason: Stephen King is one of the authors. This and <B><U>On Writing</B> A Memoir of the Craft</U> are two examples of my favorite Stephen King - unfiltered; pure King without the screen of fictional characters behind which he normally stands.

<B><U>Faithful</U></B> is funny, sad, and ultimately triumphant, as we knew that it must be. Knowing the outcome is part of the fun in reading this book as we look into the personal past of both Stewart O'Nan and King, who refers to his readers in the future knowing the outcome. King says that the format of the book, a series of journal-type entries and e-mail conversations between the authors, is the only way that it could possibly work. He is right, it works brilliantly. Listeners will be delighted by the frustrations of and observations made by these two inconsolable, long-suffering Sox fans as they head into an unknown future where their suffering will end in the miraculous eight game sweep that closed out the 2004 baseball season.

Not to be overlooked, Stewart O'Nan's writing is a wonderful compliment to King's, carrying much of the action in fine detail. His BP notes are great.

Narration is provided by Adam Grupper doing O'Nan and Ron McLarty speaking for King. Grupper is a terrific find and I hope to hear more from him soon. McLarty is a great author in his own right. His novel, <B><U>The Memory of Running</U></B> was revealed in King's Entertainment Weekly column and is a must own selection from audible.

Not Just For Redsox Nation

Though somewhat dated it is still a good listen. Stephen King is a true fan; somewhat limited in baseball knowledge but is a great writer. The surprise here is Stewart O'Nan. He is the more knowledgeable of the two writers and his passion for the Sox is powerful. He is less involved in the history and particularly the superstitions that King embraces. One of the irritating portions of the audio was their constant belief that they knew more about the game than the team's manager Terry Francona. Another was their angst over every loss. Yes it is a part of baseball to scoreboard watch but the level of upset due to the Yankees taking the lead in the division over the Sox; in May. Those problems aside it is an excellent listen and the readers are both excellent.

O'Nan and King beat the odds with Faithful. King especially is incredibly funny with classic knee-jerk reactions to Francona and the rest of the team. Both authors run you through all the emotions of the greatest Red Sox season in 86 years. The difference between this book and the others out there is that you can tell these guys are great fans first who happen to be great authors.

............. a story about two men watching baseball and emailing each other about it. Enough said.

Gave the book 4 1/2 stars----It's an enjoyable review of a most amazing and fantastic season--Comments about New Englanders' Paranoi and Psychie were especially interesting and right on target--as well as the Authors' most candid portrayal of the Red Sox Management, Fans and those "Damn" Yankewes-- Loved the Book --Highly recommended--especially for Red Sox Nation--

Since I am a Red Sox fan, I loved this book from start to finish. Iliked each journal entry from both authors, and in this book, I discovered how funny Stephen King is. This is a great way to recount the season. "number tagsgiving" "number sweepstakes"

I read this every year before the season starts.

Always great! Gets me hyped for the new season and revisits some truly amazing memories :)

Best book I have listened to

I am a Red Sox fan and I loved how this book tells the story of the 2004 season from the fan's perspective. It really is a roller-coaster of how any fan feels during any sports season. A really wonderful listen.

Interesting book on a fantastic season

Where does Faithful rank among all the audiobooks you’ve listened to so far?

It rank a 7 out of 10. Enjoyable listen but probably not something I will listen to again.

What other book might you compare Faithful to and why?

It is unique to any other thing I have read.

What does Ron McLarty and Adam Grupper bring to the story that you wouldn’t experience if you just read the book?

Much better to listen to this book than reading it. They bring a lot to the book.