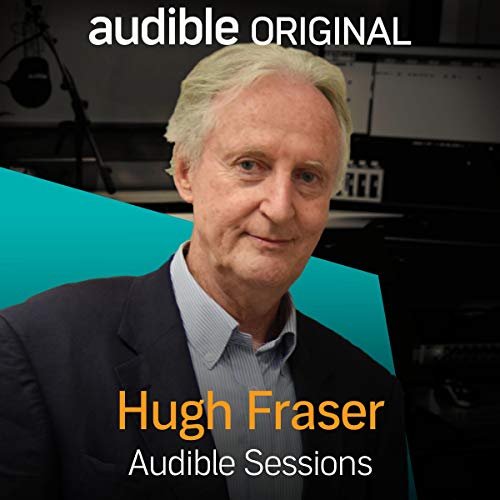 Hugh Fraser is a man of many talents. He will probably be best known to you as an actor; he played Captin Hastings to David Suchet’s Poirot on over forty occasions. But he’s also been a musician and a composer and now, having narrated over 90 Agatha Christie audiobooks, he’s writing his own crime fiction. Hugh visits the Audible Studios to discuss his crime series, his pedigree as an audiobook narrator, and his time starring in the Inspector Maigret TV adaptations.

Overall, great interview with good questions. My only criticism, was that Robin didn't sound like he was listening to Hugh's answers as much as just waiting for High to finish speaking in order to ask the next question.

Hugh Frazer is delightful but the interviewer is dreadful

Hugh Frazer was delightful and very patient with an unskilled interviewer who sounded like he could not care less about what he was doing.

Looking forward to his books!

Looking forward to Hugh Fraser’s books! After seeing his wonderful ability as an actor, and knowing of his other abilities, I truly look forward to his upcoming plots and his exercising of a new talent.

Could be longer with better interviewer

Really interesting and would have liked to hear more, with a better interviewer who asks good follow on questions. This one was a bit useless. I’d love to know for example how Fraser remembers all the accents and voices he’s created while he is performing!

Hugh Fraser is such a lovely man

Interesting interview with a particular favourite of mine, I love listening to his narration. The Poirot books are obviously going to be great and he brings each character (as Hugh says there may be 40-50 characters in all) to life.

As always a pleasant encounter with Hugh Fraser. I love his role as an actor in the Poirot series and his narration of many books too. I have now learned that he is a crime author himself and I can’t wait to get hold of one of his books.
Thank you for making this world a kinder place by providing an escape but also nurturing the English language.

The most talented actor I have ever heard

Hugh Fraser is an exceptionally skilled actor and I have enjoyed every one of his performances that I have heard on Audible.
Amid the macabre theatre of Agatha Christie there are sparks of her eccentric humour which might be missed by a less sensitive actor but are delivered just as it seems the great lady would have intended, by Hugh Fraser.
Needless to say I was delighted to hear this interview. An interesting man and master at his craft.

Back on the sleuthing track.

I’m definitely going to look for, and read Hugh Fraser’s book(s). It’s been good to listen to Hugh talking about his book and his experiences working on Agatha Christie’s stories.

For the pleasure of listening to his voice!

Hugh Fraser is a wonderful narrator. I fell under his charm of course in the films with David Suchet and was so pleased to discover the chappie was also doing audible books. I often choose books because of their narrator simply because some of my favourite books end up being killed, or at least my joy is diminished by a narrator. Hence I often choose the narrators of the books I'll be listening next, but not always of course! I downloaded this one solely for the purpose of listening to that delightful voice!