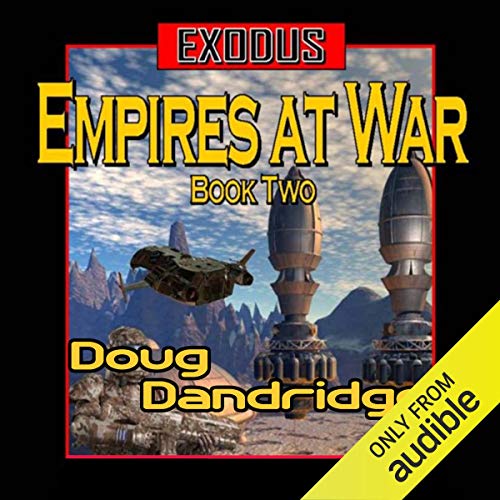 They are our worst Nightmare. Unfortunately, they do not go away when we open our eyes.The battle continues as two immense Empires go Toe to Toe, the fate of both species on the line.

The saga continues as the Ca'cadasan menace prepares to assault the New Terran Empire - a menace humankind fled across the galaxy 2,000 years before.

Humankind has grown complacent, confident in the victories their fleet has won for them through the last thousand years over numerous alien races. But the Ca'cadasan Empire has continued to grow, and now the massive Imperialistic power has found the hated humans. The Emperor knew this was going to happen, but most of Parliament ignored his strident call. And the Prince Sean Lee Ogden Romanov, third in line for the throne, finds himself placed into a position he had never thought would come his way.

The fate of the Empire may rest on the abilities of one young man, and his skills at navigating the maze of Imperial politics amidst a war of extermination. Book 2 of the popular Exodus Series.

Lots and lots of space battles

If you like Sci-Fi military dramas, this will not disappoint! I complained the first book would not stand alone. This book does a much better job. But at the end it leaves lots of questions. Some books do that to leave things in suspense. It could also be an opening for a third book to form a trilogy, although that seems unlikely (but if it happens, I would buy it).

It seems like this series is a hidden gem for sci-fi battle buffs. But if you like that style like I do, this is a fun little series.

Would you listen to Exodus: Empires at War, Book 2 again? Why?

I really do love this series of novels and and the narrator is very good although his female voices sound a bit squeaky to my ears.

You and I have developed a bad habit.....

Once it was that a stand alone book was the accepted standard of the reader. Since stand alones are now rare, I now shop by twos. If the duo look to combine for an exciting, well charactered, good plot read, I buy. In Empires at War, it's all those. The promise of a third book with the same attributes of the first two, is a definite plus. In Empires II, as with one, it's a slow start while everything is brought forward to the new start. But it's followed by air battles, enemy machinations, and intrigue! Who could want more?

too slow too many farsighted

Great except for the annoying chime!

Good book if you're a fan of space opera/ military scifi. Backstory stage has given way to some good action! One criticism - GET RID OF THAT DAMN ANNOYING CHAPTER CHIME! Reader did a good job with only a couple of mispronunciations. Otherwise, I will be on the lookout for another book in this series and would recommend this one as "credit worthy".

Good but stretched to a book from one episode

The classic story but it covered a very short period of time and was a short episode.

The performer does great voices audio is of high quality. The story is great I am looking forward to book 3.

Space war at its best

Cannot wait to listen to next book in series. I hope that there will before books to come. Can highly recommend.