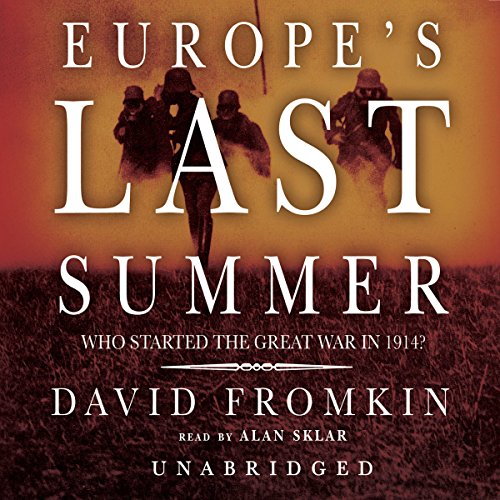 The early summer of 1914 was the most glorious Europeans could remember. But, behind the scenes, the most destructive war the world had yet known was moving inexorably into being, a war that would continue to resonate into the 21st century.

The question of how the Great War of 1914 began has long vexed historians. In a gripping narrative, Fromkin shows that hostilities were started deliberately and that two wars were waged, one serving as pretext for the other.

Shedding light on such current issues as preventive war and terrorism, Fromkin provides detailed descriptions of the negotiations and incisive portraits of the diplomats, generals, and rulers as he reveals why diplomacy was destined to fail.

A different take on the events leading to the Great War

This is a throughly excellent take on a subject near and dear to my heart. Even in High School, while learning about the First World War, I was dissatisfied with the lack of insight about the causes and motivations which lead to start of a European cataclysm. I wished to know more about the political and human elements before and during the war, and luckily for me, the cast of rulers, ministers, diplomats, politicians, journalists, and murderous wives responsible (or believed to be so) is incredibly small for such a massive conflict. Fromkin gets around to all the usual suspects, but often asks of them unusual questions in a historical interrogation. Europe’s Last Summer assumes a slightly different take on the events and human aspirations which drove decisions (or prevented them), and examines whether some of the tropes and assumptions built in to the typical 1914 crisis narrative have much truth in reality. Whether I agree with some of the conclusions or not, I found it both entertaining, informative, and engaging. Definitely worth a listen if such a book is in your wheelhouse. Narrator Alan Sklar does a credible job, which can’t be easy. So, no problems there. All in all, I’m pleased. If you’re new/newish to this subject and you are looking for titles to burn credits on, I suggest Europe’s Last Summer, but not as your first book — It would be incomprehensible gibberish to the uninitiated. Make it your fourth or fifth. If I had to make a list to get someone up to speed from a selection on Audible, I would recommend the following: G.J. Meyer’s a World Undone as an excellent introduction/overview of the people/places/events prior to and during the 1914-18 conflict and 1919 peace conference. Sir Max Hasting’s Catastrophe: 1914 is in-depth account of the July crisis and the first year of war in the west and east. Margaret MacMillan’s The War that Ended Peace is a great study of late 19th and early 20th century Europe’s cultural, military, and political landscape and helps lay out the friction between Britain and Germany over the naval arms race. Lastly, Philip Gibb’s Now It Can Be Told is a journalist’s uncensored, first-hand account of the war, published not too long after the the cessation of hostilities. Gibbs wasn’t the first journalist to follow a war and write a book about it, but Now it Can be Told might be the most important and influential work of the 20th century.

This is a great reading. Well-written and well read. However, the author is very sure of his opinion, which seems pretty biased, as he not even tries to support with evidence his concept that France, Russia and Great Britain had fight the war because Germany declared war on them.

Some food for thought

3.5 stars. While it at times devolves into a bit of a 'whodunit', this did expose me to some more recent research and avoids the traditional trap of lining up the dominos before an inevitable and irrevocable push into catastrophic war. Worth a read/listen if you liked Tuchman's "The Guns of August" but want to get caught up on the last 40 years of scholarship.

The author outlines the settings leading up to the war. Many of these are understood by students of WWI. The author then describes opportunities each country had to prevent the war and their failings. Enjoyed the voice of the narrator which is often difficult for historical narratives but this one was very good. Listened to several chapters multiple times.

The strength of Last Summer is in the historiography, Fromkin provides a broad discussion of WWI literature. The print version would likely be a good place to begin more in-depth reading. Yet, a more accurate title is "Summer 1914: German Wat Guilt." Fromkin begins with intellectual dishonesty: "no one expected the Great War!". He then spends the rest of his narrative showing that the war could have not only been expected but all major powers fully anticipated the war and had some idea of opposing war plans. Evidently in an effort to finger Moltke, Fromkin insists on renaming the Schlieffen Plan the Moltke Plan. For an understanding of WWI, this is unnecessary - I don't think there has been any question that Moltke's general staff operationalized the war plan - and only serves to advance Fromkin's polemic. There are other logical flaws, although this may arise from Fromkin rationalizing diverse secondary sources. In brief, problems arise suggesting the German military left Austrian war planning to a German civilian government it did not respect, the German military advocated a short, limited war in the Balkans then pursued a general war a few weeks later, and the leading role of the Kaiser who suddenly becomes sidelined for no reason. Austrian "thirst for war" also contrasts with weeks and months Austria took to act. There is also an elephant in the room: if the German military longed for a general war and thus desperately needed Austria, why didn't Germany include Austria in war planning? German war planning meticulously created train schedules for mobilization but can't be bothered with the plans of its ally? Fromkin's focus is overwhelmingky on Germany and Austria with some attention to the British. The French are almost completely ignored and Russian mobilization is dismissed because it's just Russia(?). There is nothing technically wrong with the narration, there were no overt mistakes. Unfortunately, however, the voice actor sounded like a used car salesman and his voice was not suited to the content. The voice work may have impacted my opinion of the narrative as it sounded at times boastful and/or condescending.

Overall, the provided some interesting background on the drive to war by Germany and Austro-Hungary. Unfortunately this book ignored significant scholarship on the contributions of British, French in Russian missteps/misconceptions that led to the Great War. Despite the book’s narrow focus on Germany‘s contribution to starting the war, it was a good read.

Difficult for a newcomer to the Great War

I have read a great deal about WWI and found this book to be quite interesting, if occasionally dry. This is not a book for someone who is new to the study of the Great War of 2914-1918. The book seems to be exhaustively researched, and so, will be valuable to the more serious student of the war.

A must read as to understand what really caused The Great War, and every war since! The great restart started over 100 years ago. Some of this story will send chills down your spine to current events.

Incorporating newer (mid 2000s) research, Fromkin argues basically that the war occurred because Austria(-Hungary) wanted a war with Serbia, made possible by Germany's famous "blank check" support and the belief that Germany might keep the Russians out of it. The German military leadership, especially Von Moltke, took the opportunity, now guaranteed Austro-Hungarian support, to pursue a long planned war with Russia (and France). Motivated largely by fear of emerging Russian power and an economic (especially taxation) and social system that had reached its peacetime limits, Germany purposely pursued what would become the Great War in spite of the consequences for civilization. This is more than simply an updating of the self-serving 1919 war guilt argument, with Fromkin largely basing his conclusions on newer secondary literature. He deals with Fischer's conclusions in the 1960s without directly taking up the continuity of German war goals in the World Wars, which is a bit unsatisfying, though not his central purpose. While the central focus on Germany and Austria-Hungary, he also spends time on the British and French situations and admits of broader factors like nationalism, industrialism, militarism and domestic affairs in creating the situation in which the war occurred. Relatively little is said of Russia (including any broader war goals or pan-slavism). His treatment of Kaiser Wilhelm II is especially illuminating, presenting him as blustering, unpredictable, and sometimes immature and belligerent (the common view), but also likely to step back from the brink of war, leading his advisors, generals, and handlers to carefully manage him into war. Though not terribly academic in tone or approach (it has 50 or so often short and sometimes redundant chapters), it is well-narrated and recommended as worthwhile reading along with other works about the origins of the war that continues to shape the modern world .