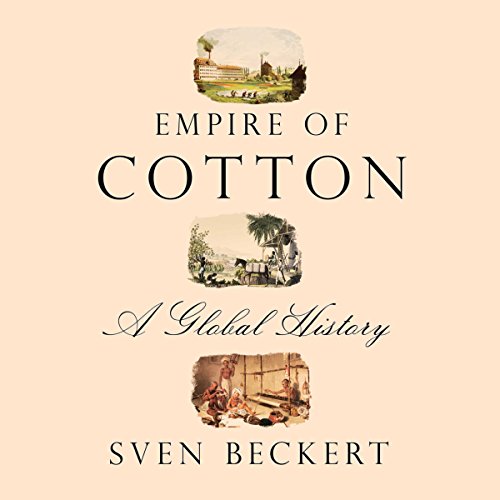 Sven Beckert's rich, fascinating audiobook tells the story of how, in a remarkably brief period, European entrepreneurs and powerful statesmen recast the world's most significant manufacturing industry, combining imperial expansion and slave labor with new machines and wage workers to change the world. Here is the story of how, beginning well before the advent of machine production in the 1780s, these men captured ancient trades and skills in Asia, combined them with the expropriation of lands in the Americas and the enslavement of African workers to crucially recast the disparate realms of cotton that had existed for millennia. We see how industrial capitalism then reshaped these worlds of cotton into an empire, and how this empire transformed the world. The empire of cotton was, from the beginning, a fulcrum of constant global struggle between slaves and planters, merchants and statesmen, farmers and merchants, workers and factory owners. In this as in so many other ways, Beckert makes clear how these forces ushered in the world of modern capitalism, including the vast wealth and disturbing inequalities that are with us today. The result is a book as unsettling as it is enlightening: a book that brilliantly weaves together the story of cotton with how the present global world came to exist.

A New History of Global Capitalism

What made the experience of listening to Empire of Cotton the most enjoyable?

A compelling socioeconomic history of the "white gold" -- a commodity so familiar that we take it for granted. The thrust of the author's thesis is that cotton is central to any discussion of the rise of capitalism, the Industrial Revolution, and global markets from the 1700s, not peripheral to it like some people would like to believe. The UK subtitle "A New History of Global Capitalism" better captures the book's real subject. The emphasis is on the period of the mid-1700s to mid-1800s when cotton growing and manufacturing were at their peak in the UK and the USA, though India, China, and other countries factor into the discussion. There is far less emphasis on cotton in the 20th-21st Century.

A highly detailed, mature history of one of humanity's most essential commodities, and the greed, brutality, and ingenuity that human beings have applied to its cultivation, manufacture, and sale.

What does Jim Frangione bring to the story that you wouldn’t experience if you just read the book?

The reading was very strong. Considering the large number of non-English names, societies, and companies cited throughout the book, learning the correct pronunciation for everything must have taken considerable time and effort on the reader's part.

I was drawn to the title of this book because I had an inkling it would tell a story worth listening to about something I knew little about. I was not disappointed. I knew that cotton is an important commodity in world markets but I did not realize just how significant it was to the national economic development of so many countries. As a school boy learning US history I was taught about the cotton gin invention of Eli Whitney as it was used as an example of American ingenuity and inventiveness. What the textbooks and my teachers failed to mention was the dramatic effect the invention had on the expansion of slavery and official government policy towards native people in the United States. This along with many other interesting cotton tales were eye openers for me. I now have a much greater appreciation for the struggle between labor and capital. So why have I rated the story in the mid range rather than the high? Only because I felt that the amount of information in the book just became too overwhelming. I frequently felt my mind wandering away from the book as I listened and even though I struggled mightily to concentrate I just could not hold onto the story. This usually happens when I encounter a book that must be read rather than listened to for maximum enjoyment and benefit. So, my rating is not meant to be critical of the story itself; rather, it is a warning that the audio format might not be the best way to enjoy this book. The narration was superb--it is not his fault I didn't give this book five stars. I am glad I listened but if I had to do it over I would read.

A valuable economic saga over centuries

A very thorough economic detailed saga of the uses of cotton to fuel the mechanical revolution.... as well as it's role in so many turns of human history around the world until the current times.

One of the best books I've read this decade

I've recommended this book to everyone from trade experts and economists to artists and housewives. Read it.

Surprised by how much I learned

I originally didn't think I would get through this book. But the further into it I got, the more I learned, especially about the civil war. It certainly gave me another perspective on world relationships.

One of the most important and compelling accounts of the growth and expansion of the modern world.

Very comprehensive review. If nothing else you could read the first chapter/prologue and epilogue and get an appreciation for how third one plant has changed the world.

A basic text on the underside of capitalism. First rate historical account of the interaction of oppression, industry and nation states.

Eye opene but deary me when does this end?

Would you try another book from Sven Beckert and/or Jim Frangione?

If you want to know about the major players that shaped the last few centuries then you must recognize you know nothing on this subject, but Sven Beckert can explain it succinctly and woe to your next opponent of historical counterfactual debates. Cotton you will find shaped 17th-19th century economies and battlefields...but no, I repeat myself. Sure, we all know that our War Between the States was over slavery and human bondage was necessary to grow cotton. But was it really? I won't spoil the book for you.

Would you be willing to try another book from Sven Beckert? Why or why not?

Yes but it doesn't have to be a dry subject. I mean look at the book "Cod" If someone can make those sentences sing on a fish then cotton should be easy. I am a pharmacist, not a historian, and things I was relating to my coffee group, who teach history, was perking their curiosity. If you are a teacher and didn't know the back history I see now why America can no longer teach their children...you don't know Beckert's facts. Sorry, inflammatory and somewhat belligerent but nevertheless true so suck it up, read the book and get back out there and try harder.

I am a little down on the book because cotton's boom and bust cycle is neverending and so is by definition going to become somewhat er, boring? Cotton's influence has been undending (till this century) ...but don't they say history repeats itself? I would have rated it higher had the author swung the softball lobbed him over the plate and speculated what would have happened if our 'greatest' president hadn't been elected, the cotton-dead states of Virginia and North Carolina had not gone out in 1860 on the eve of huge leaps forward in agronomy. Slavery, which you will find is synonymous with King Cotton, would have become a dinosaur. Perhaps. Would the modern, dreadful state persons of color were forced to accept have been entirely different? Perhaps. An unforgivable lost 'what if' opportunity to explain a more righteous 150 year quest for civil rights, all because of your t-shirt.

Was Empire of Cotton worth the listening time?

Thank you for an informative read. I'd recommend you to my friends.