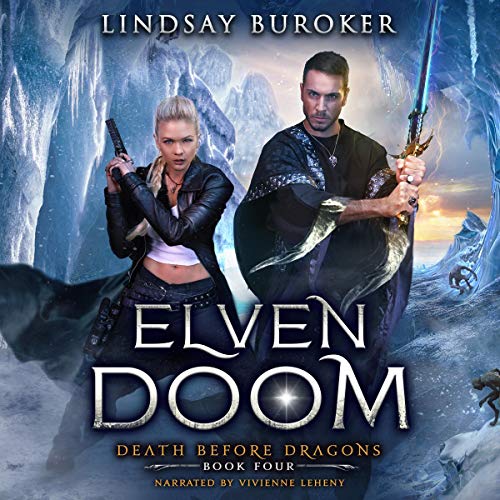 After returning from Idaho, I was hoping to have time to figure things out with Zav - also known as Lord Zavryd, the dragon who claimed me as his mate without asking - but the dark elves are up to their old tricks again.

Actually, they’re up to far more deadly tricks, using more powerful magic than I knew existed. I have no idea how I’m going to stop them, but if I can’t, my entire city and everybody I care about could be obliterated.

To make matters worse, Zav’s sister has shown up and is rooting around in my life. His family doesn’t approve of me, and she plans to put an end to our relationship...one way or another.

I thought this was a pretty good book, despite it being rather stressful at certain moments. The stressful events that happened between Val and Zav's relationship is kind of the reason it took me so long to read this book (if I recall correctly, I think I had skimmed ahead or something and spoiled a few things for myself). Along with the fact that the series was still ongoing and I was waiting for the audio books to be released as well. I liked the development between Zav and Val. But then a few things kind of bothered or annoyed me. I really liked how Zav and Val have become more touchy feely with each other (and it is pretty obvious how attracted they are to each other), as I think that is a good thing for Val as it seems like she has never had someone in her life that she has truly felt that way towards, as she really seems to like hugging Zav. Which is cute. I also like the fact that they have become a bit more willing to be honest with each other on some aspects, and are also more comfortable to work together as well, but I think because of the whole 'coming from different worlds thing' they seem to have a tendency of miscommunication. The thing that kind of annoyed me is that Val seems to think that being Zav's mate is superficial or fake until they actually have sex with each other or something else, as there is more to being in a relationship then sexual activities. And also how confusing Zav can be with his mixed signals, which ends up confusing Val and Zav isn't being straightforward with making her understand that he really does want to go out with her officially and not just to protect her from other dragons. They clearly like each other which is why Zav seems to be battling with himself with saying one thing but doing another thing instead and was also the reason why Val was hurt by what he had said in her jeep. I do like the fact that despite their attraction, they both seem to genuinely like each other for who they are and it's not just lust, except Zav might have indicated that's the one thing that's driving him to hurry up and take her to meet her father. So there is still a bit of miscommunication going on between them.
I do kind of hope that Zav might become friends or at least become a bit friendlier with Val's friends and family. But I also understand that he had a lot on his plate during this book. I also really hope he doesn't have any hard feelings towards Val about the charm and the fact that she had been tricked by another elf. I'm hoping that one of the reasons why he wants Val to learn to not succumb to outside manipulation is that he doesn't want her to suffer the emotional trauma of possibly hurting or killing Zav (as she was horrified during the events of when Zav saved her and she unintentionally betrayed him because of outside manipulation), than just the fact that he doesn't want to be worried about being killed by her. I do kind of like the way he is so possessive and protective of her, as once again, I don't think Val has ever had someone like that in her life. I also find the whole shoe thing with Zav to be hilarious. I am kind of curious if he will ever change the rest of his outfit for a special occasion and not just his shoes. The tugging down his robe when he got into her jeep was also pretty funny.
It was a bit frustrating that Val was so easily duped by the other elf and didn't think of the consequences of excepting a charm from basically a complete stranger, but I did like the fact that Val at least didn't fully trust the other elf. I can also understand Val's interest in wanting to know another elf who could be her family and to learn more about her magic powers. I am also hoping that her boss won't hold a grudge for too long and that their relationship can go back to being what it was because of the way Val handled the mission towards the end. Which I also understand why she did it as it was kind of true. More people would have died if she had brought them down there. Even Val had a hard time handling the dark elves, and she is a half-elf with enhanced abilities compared to a human, plus the polluted air in the caves that she nearly died from as well.
Overall, I thought this was a good book.

* Narration*
As usual, Vivienne Leheny did an amazing job with narrating this book. There was only one moment that I thought her tone of voice didn't exactly express the right emotion going on during the moment, but it could just be me. It's the moment where Val is speaking to her boss and admits that Zav isn't coming back to Earth. In my head with how it was stated " there was an emotional lump in my throat " or something along the lines of just how upset she was about what she had said to Zav, that I figured her reply to her boss would have been of a lower, sadder tone of voice, not rather cheerful sounding. But despite that moment and the frustration I had with getting it to Whispersync with the book, I really enjoyed listening to this audio book and would highly recommend this series to other people.

I'm Addicted to this Series!!!!

This is one of the best series I've listened to in a really long time!!!!

Wish it had more romance.

Although I wish it had more romance I did enjoy the story line and characters. It had a lot of funny moments as well as the kick ass heroine. Narrator was excellent but again, I wanted more intimate moments between them.

Took this book to long to get on with the story.

It does get better but I lost interest for a while and had to go back a few times.

Another great story from Lindsay

Although Lindsay has not responded to my proposal of marriage, I enjoy all her books. I enjoy the way she includes all D&D character types. For example Golems, Frost Giants Kobalds. The story line is great

Great characters and action. Looking forward to the next book. Really enjoy Lindsey's books. Keep on keeping on.

loved it, there has to be another book in this series . I will be disappointed if there is not

I love this series, I read the first three books, but then downloaded the next 6 books on audio. The books are fun, and the narration is great. (I will say her Australian accent is a little strange at times, but still enjoyable).