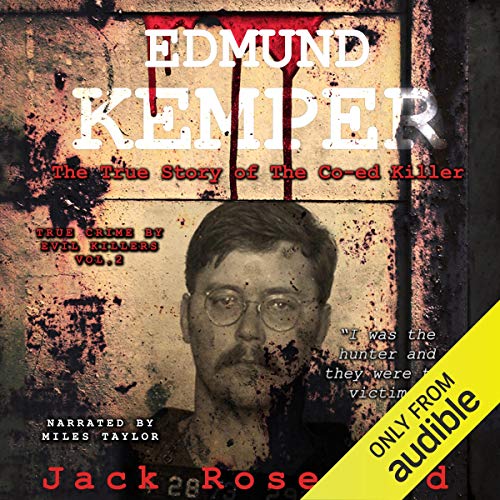 Edmund Kemper - The True Story of the Co-ed Killer

American serial killer Edmund Kemper III stalked co-eds in California at the height of the era of peace and free love, dismembering his victims and tossing their body parts in remote areas around Santa Cruz. As pieces of young women began washing up on shore and turning up alongside rural highways, female residents - especially college students - were decidedly on edge. A lust killer who savored the act of decapitating his victims - and often used their severed heads for sexual pleasure - Kemper's story is particularly twisted among historical serial killers. Still, the true crime tale of Edmund Kemper is particularly fascinating, because the man many people called "a gentle giant" was a near genius whose cunning manipulation of others made him particularly depraved and dangerous.

This true crime story, a detailed biography of one of the most psychopathic serial killers of our time, shares some insight into the troubled childhood and awkward nature that led the American serial killer to take 10 lives, including those of six pretty co-eds, his paternal grandparents, his calculatingly cruel mother, and his mother's best friend. Among historical serial killers, Kemper is especially depraved, since he included necrophilia and cannibalism in his gruesome mix of sordid criminal activity. Ultimately, Kemper's murderous inclinations and urges to kill were satisfied after he bludgeoned to death his mother, a woman he'd hated since he was eight years old, and he turned himself in. But if he hadn't finally acted on his long-held fantasy to end his mother's life, he might still be trolling California highways, getting away with murder.

Edmund Kemper - The True Story of the Co-ed Killerに寄せられたリスナーの声

Very repetitive and straight from the interviews on tv

This book was straight out of the documentary you would find when you type in Ed Kemper's name on YouTube. Nothing new, no added information about the case or any attempt to try and look at the in-depth psychological aspect this monsters mind it was just a list written in a very boring matter of fact way kind of way like the author just jotted down some notes while watching a documentary on YouTube or Google and made that into a book. Even the chapters were only about five minutes long. Not missing anything by not listening to this book! I regret buying it

It's to the point and brief

I have read three books on Kemper and it's disappointing to hear such an interesting story/life be told in such a way that I was actually bored. not worth the small amount of many. Much better books on Kemper available.

could not stop listening!

loved this book... I really love the last chapter it gives a lot of insight.

I really wanted to like this book. I tried listening on multiple occasions, but the narration couldn't get my attention.

I felt as though the narrator approached the book with an almost robotic method. He had little changes in his inflection when reading a quote from any of the characters.

I was bummed out when the book ended :(

I very much enjoyed this book and learned so much that I didn’t already know going in about Edmund Kemper. The narration is done beautifully and kept me engrossed for sure. This will definitely be one I read again down the line. Thank you!

Did not enjoy the reading. His Asian accent was terrible and unnecessary. Otherwise, it was straight to the point and informative.

Audio performance was not great.

Audio performance was not great. Not very detailed information about the case or trial. hopefully there are better books out there on Kemper.

the narration is great, although I was really looking for more detailed accounts of ed's discretions.

What did you love best about Edmund Kemper - The True Story of the Co-ed Killer?

Edmund Kemper is a serial killer who killed his grandparents, his mother (the focus of his internal rage) and several young women in California. This book talks about Ed and his crimes, including his juvenile crimes (killing his grandparents) and the time he spent at Atascadero State Hospital, which is for the criminally insane. The author gets straight to the facts and has no filler, just the facts. It is well-written and well researched. This book makes no excuse for anything that Ed did, just told it like it was. He did make some conclusions, but those were based on the facts given. I have enjoyed all of the books that Jack Rosewood has written that I have read, and this one is no exception.

This did not really give any proper detail on the psychological profile of Edmund Kemper. In fact it seemed to be entirely transcribed from a YouTube video. Very basic overview of the story.

I initially questioned of this was a computer generated voice, but soon realised it was just a human with very odd inflection. Weird choice for a voice over. Very bizarre patterns of speech which were often distracting. The story was interesting enough, but not incredibly well written with annoying over use of phrase and words.

Easy to listen to, informative, I learnt facts about Ed Kemper that I didn't know before7

Disturbed, but intelligent man, making him good at what he did and good at fooling people, interesting story

the narrator seems to struggle with the most basic intonation, putting pauses in the middle of sentences, and removing natural pauses. the result is an audiobook which is less than enjoyable, because so much of the focus goes to decoding the narration.

If you want to know about Ed Kemper, watch his interviews on YouTube. There are two. The only new information this book supposes is a disrespectful poke at Ed's penis size. There's also a schoolyard dose of judgment and misunderstanding. A flaccid attempt at research and proof that anyone can write a book. Do not reccomend.