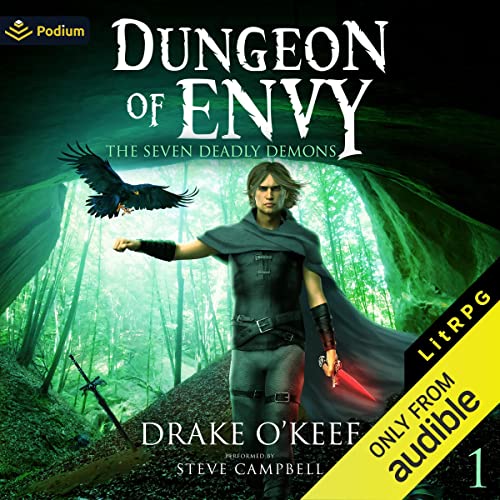 Imagine a world where humans are almost extinct.

Hundreds of years ago, the realm walls collapsed, and Earth was flooded with mythical creatures. Now, dungeons dot the landscape, releasing demons that terrorize and destroy everything in their path. If they aren’t stopped, humans won’t be the only endangered species.

To preserve life and win the war against demons, protectors from different species all over the world have downloaded level-up programs to help them fight. Jason Jonosan doesn’t want to be a part of that world, though his dad created the original tech. His dad’s latest work has made him a target, and Jason finds himself running for his life.

When he’s accidentally injected with an accelerated prototype, it’s level up or die. But as he goes through dungeons with his best friend and new party members, they realize the situation isn’t as simple as they always believed, and the race to save Jason’s life turns into a quest to save the world.

Okeef and Campbell have made a gem!

I’ll be honest, as a mom of six it’s hard to find time to sit and read. I bought this paperback for my kids and they talked about it for days! So when I heard it had come out as an audio book I knew it was my turn to love it! Campbell did not disappoint! A narrator can make or break a book and I totally got lost (in a good way) in this book! My kids got tired of me wearing my headphones everywhere! But I’ve got to say my kids were right to go on about this book, I’m glad we can all talk about it now! I can’t wait for book two to go audio!

the MC fills the chosen one trope, other than that this is just a solid book with good plot, interesting characters with depth and a world I want to know more about...

Steve is amazing in this one, we get a wide variety of emotions and even accents and otherworldly voices

DISAPPOINTING ESPECIALLY THE END SAVE YOUR CREDIT.

I LOVE WHEN FIGHT SCENES ARE 70% IN THE MCs HEAD (THATS SARCASM I HATE IT).
I have read my fair share of litRPGs in the classes I hate reading about are any dagger class, classes that use daggers all play out the same he sneaks in the shadows does some damage then runs away and his party inflicts 80% of the damage.
Dagger class are so boring especially when his party uses devastating magic and cuts monsters in half with one strike of there sword.The side characters is where the actions at, the MC is just carried through every dungeon in this book. Hear this stupidity the MC went from level 0 to level 27 so quickly fighting along side his sister the entire book who is level 25 at the start and she did 15x more work then the MC but she NEVER gains a SINGLE level and the MC gains 27 levels I call bull spit.

If you like action start to finish then this book is for you. It is worth a credit.

I loved this book! It got a very interesting plot, a great mix of character (I love Blaze!), and a good dose of action, adventure and drama!

Steve Campbell was absolutely amazing in this one. He continues to impress me. His voice acting skill's simply top-notched! And yep, I had a couple of tissue moments with this because of his amazing narration.

I really enjoyed following Jason and his companions on his fantastic adventure! I loved the overall storyline however, some of the dungeon battles went on a bit much for me. The final dungeon battles were epic and totally my favorite. Blaze is one of my favorite characters and I love that he talks about himself in the third person. The narration was absolutely wonderful. Steve Campbell’s voice acting skills are really showcased in this story.
This is book 1.
I recommend this book.

Highly recommended. Solid litRPG. A good start to the series, anything I can say would be a spoiler.

Was hoping for more

The book is okay but had the potential to be great. The MC has some big character flaws and does seem to know how to overcome them. However, the other supporting characters are really interesting and you start to root and cheer for them more than the main character.

Intriguing and full of promise

In a world filled with crappy books, this one is worth the time investment. The characters have depth and sophistication. The story line is dark and full of promise and hope. I think another key factor is that well formed Rogue and Ranger characters are always my favorite.

Reading this book felt like the writer struggled writing this novel. The races had me shaking my head. The story seemed like it was written by someone who has little experience with having different races in stories like Lord of the Rings or Zelda. I usually enjoy stories woth different races and creatures but everyone felt the same in this story. Hopefully the writing improves in the sequel.

mc is weak, dumb, anoying and an asshole.... after 20min is was hoping he'd die