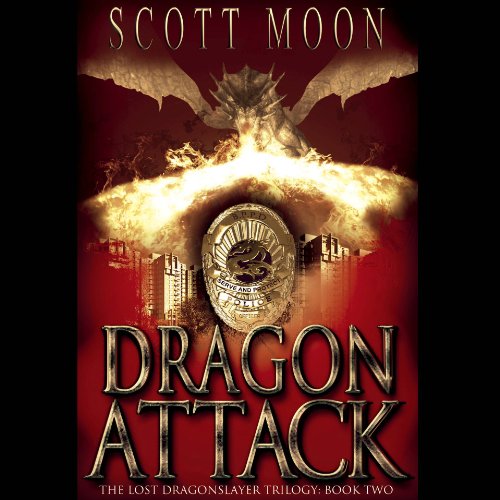 After defeating the demons and hellhounds of Travass Isegurad, Michael Prim races toward another confrontation with the sorcerer. Nicole's curse drives her into isolation. Her friends fight to save her. The Rift between Blue Point and the magic world disintegrates, taking innocent lives during the chaos and releasing deadly creatures into a modern world unprepared for dragon war.

Can a helicopter chain gun take down a dragon? Can the SWAT team survive an ambush set by sorcerers? Does Michael's Dragonborn girlfriend resist the magic that will make them enemies?

If you want to see what happens to the characters in Dragon Badge, buy Dragon Attack today!

A good sequel to Dragon Badge

This story moves fast. LOTS of action and thrills. The story becomes more complex, as watershed moments happen several times. It's part love story, all action, and bloody fights of survival. Dramatic world building without getting lost in the weeds. I was not disappointed, as many sequels are an attempt to keep a story going, versus Dragon Attack where the story grows and the world keeps expanding.
My sense of adventure was fully engaged. I already started Dragon Land, (book 3 of this trilogy) because Dragon Attack was a worthy sequel to Dragon Badge, so I can't wait to see what this brings.

the premise is interesting and the narration is good but the story has many fatal flaws, I tried 2 of the three in the series and both have continuity issues, loss of plot and are just confusing.