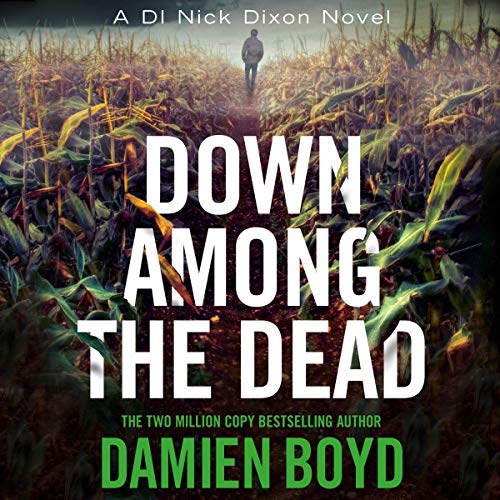 Somerset’s bloody past meets a dangerous present in this thriller from the bestselling DI Nick Dixon crime series.

When a badly decomposed body is discovered during an archaeological dig on the Sedgemoor battlefield, Avon and Somerset police are notified immediately. The remains are recent, and Detective Chief Inspector Peter Lewis knows exactly who they have found.

With Parker’s appeal hearing imminent, Lewis comes under intense pressure to pin this new murder on him quickly and quietly. It’s an open and shut case - and Lewis should know - so why then does he insist on assigning it to DI Nick Dixon?

As Dixon starts to re-examine the original investigation, shocking revelations come in from the forensics team. And just as Dixon’s worst fears begin to surface, another body is found…

It's just not the same..

I read the first 8 books in the DI Nick Dixon series and loved every book. Then I read book 9 and my feelings for the series started going downhill with the new narrator. When you listen to someone who has a different voice for every person in the book then someone comes along and every person sounds exactly alike it’s no longer any good. It was like Adam Croft who redid all his fantastically narrated books and narrated them himself. No idea why he did that, because the man CANNOT narrate worth a crap, so I quit reading his books AND he took all of my, and everyone else’s, reviews off audible after he narrated them himself.

Still not crazy about Simon Mattacks,
Napoleon Ryan rocks. Other than that I love the characters and story.

I struggled to get into the story and had to restart listening from the beginning several times......very long and stretched out!! I finally realised that this is a very cleverly written and well plotted book. I have to admit that i enjoyed the story, but it won't be to everyone's liking!!

Wow! This one is hard to put down! The victims stabbed by a sharp scythe blade, then dried until they are shriveled up prunes. Oh, my goodness!!! And the serial killer that DI Lewis put in jail all those years ago, Daniel Parker is up for parole . . . and oops, we’ve got another murder . . . can’t be Parker, he’s in jail. The site of an archaeological dig on the Sedgemoor battlefield is the scene of the crime. And that in itself is interesting, as I had never heard of that battle. So, history lesson for me. DI Lewis and DI Dixon learn a lot about one another in this installment of the series, and I really like them both. DC Jane Winter, Monty, Dixon’s faithful dog are other favorites. The case with ties going back fifteen years is mind boggling and as in the other DI Dixon books, I couldn’t stop listening. What a fantastic and detailed story! I didn’t see the resolution coming. Excellent conclusion!

I switched between reading and audio and either medium found me completely engrossed. Although I can often be disappointed when I hear a character's voice as very different from their voice in my imagination, this was certainly not the case this time. Simon Mattack's narration is superb, changing from male to female characters effortlessly and completely believable.
I was so sorry when I finished this. I have read all previous Nick Dixon stories and am thoroughly invested in the steady character development and understandable reactions to the unfolding situations.
What an absorbing read/listen- thank you.

down among the dead

This book was brilliant reflecting the skills of Damien Boyd. The storyline was so realistic I could imagine every scene.
Hopefully there will be another book in the series.

A great page turner of a book. brilliant story, good humour and interesting characters. When is the next book coming. please don't make your readers wait too long.

Gripping story, plenty of sub plots, entertaining read. The story included lots of facts about the history of the area too.

This series just keeps getting better. Well plotted with plenty of twists and turns to keep you guessing. I loved the introduction this time of links to the past being a history buff myself. The characters are well realised and are now firm friends. Looking forward to hearing more from DCI Nixon in the future

brilliant plot with a twist

An amazing storyline. A bit of hard slog for the first couple of chapters while the back ground is set but an excellent book. Still love the characters

interesting twist I don't think I would like live in Somerset there's too many going on in that area over the whole series ;-)

I listened to it. All I think because of Simon Mattacks narration he’s got a terrific voice. As for the story. Well........it’s average not at all moving. The lead seems to be more in love with his dog than his girlfriend. I wouldn’t recommend this.