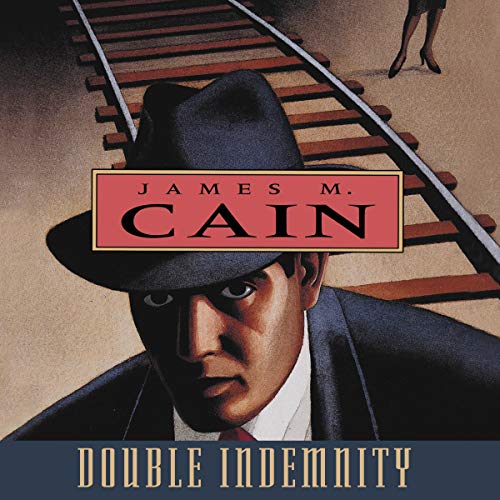 Tautly narrated and excruciatingly suspenseful, Double Indemnity gives us an X-ray view of guilt, of duplicity, and of the kind of obsessive, loveless love that devastates everything it touches. First published in 1936, this novel reaffirmed James M. Cain as a virtuoso of the roman noir.
©1936 James M. Cain (P)2005 HarperCollins Publishers, Inc.

Double Indemnity; when Cain is good, he is brilliant. Who else writes crime like this-sudden and gripping? Not word that doesn't drive the story forward with a you-are-thereness few writers can rival. Crime in Cain's novel is like an impulsive, illicit passion, when it's done, the partners separate in mutual disaffection. The intricate insurance scam and murder plot is masterful. Cain's style is odd yet apt and he can write dialogue with the real rhythm of speech and remarkably, Cain's language doesn't feel dated. I found that the terse, controlled tone of the narrator, James Naughton, exactly suited Walter Huff, telling us just how it was, his nightmare venture into crime.

And Audible, bring us MORE of the fabulous James M. Cain!

Straight down the line good

Would you listen to Double Indemnity again? Why?

I have already listened to this several times -- sometimes as soon as I have finished it I start it from the beginning again.

Double Indemnity (the original) is my favorite movie, and although I knew that the story was quite different (I knew some of the twists that the movie left out so they didn't surprise me), I had not expected it to be this good. Seeing Phyllis -- and her doomed husband-- Lola, Nino, Norton and especially Keyes through Walter Huff's embittered eyes adds a dimension to them that the narration in the film doesn't really show. This doesn't take anything away from the film, and I am glad that Billy Wilder had the sense to stay out of the weeds that this story takes its readers into.

Sometimes that narrator seemed to slip into what I can only call "a Goodfellas accent." It was rather jarring and sporadic, but this is just a small quibble in what was generally a riveting and well-told story.

Cain is always good. And this is deservedly a noir classic. Like Postman, excellent and a lot accomplished in a short novel. Many writers could learn from his lean style.

This was a brilliant story, and I thoroughly enjoyed it. The fact reader too was really good and kept to an even pace that made listening a pleasure.

I've always loved audiobooks. Your players functionality makes it an easy, and a great experience! The book narration is Okay.

Not the kind of story I like to read, but it was different.

It’s probably above average for readers who like hard-boiled crime fiction noir.

It’s famous so I was curious. It’s told in first person by Walter Huff. At times he talks directly to the reader using the word “you.” Walter is an insurance salesman. He sounds like a good salesman – a smart guy. But he’s a dweeb or goof or something odd when it comes to love. He talks to a woman a couple times and claims he’s in love. Something happens and he is immediately out of love. He talks to another woman a couple times and says that is true love. And when he loves someone, murder is just something to do for them. Weird. But I like weird things.

Although, his murder motive is not just for love. Huff claims the big score appeals to him. And since he’s an insurance guy he knows how to get around the problems.

The main story is about two people planning a murder. They are the bad guys. We are never in the murder victim’s head. We are in the good guys’ heads just briefly – when we listen to insurance company executives discuss the insurance claim. That part was a little boring.

I did not like the ending. It was disappointing and vague. I had to make assumptions. It was bad news for the bad guys, so I suppose that makes it a happy ending for good guys. But I wanted something more.

This was written in 1935-36. There’s something neat about the dialogue. The writer did not grow up watching TV, movies, etc. So he sounds different from contemporary writers. I liked it. There is a directness about it.

It is a third the length of a regular novel.

Classic book from which the "film noir" of the same name is based. This is a story of seedy seduction, double dealing and intrigue leading to ultimate doom. Film ends quite a bit differently from the book, but bottom line is that these two main characters really deserve each other. This is a good presentation, capably read. I found it quite an entertaining listen and give it a solid recommendation.

Written in 1936, this is one of those old fashioned novels in which the main character narrates to the reader. It is a cute form of writing and takes me back to my youth watching those old black and white detective movies. "Her dress was in the hollywood style and could not hide the body that was in it and she knew it." Not an exact quote but close. In this short novel the main character falls in love with two different women, based on looks alone. He kills for one woman who he barely knows. He is an insurance salesman who knows all the angels. He plans the murder and they carry it out. He does this to get $50,000. His only claim to the 50 would be if the wife wants to share. He does not seem to think this is a problem though. It is all very cleverly planned and carried out. Like in all murders, there are some twists and it seems he does not know his lover that well. Like in the Postman Always Rings Twice, which I liked better, he actually gets away with it, but ends up paying for it in the end.

Love it but kind of drag on. The movie was better

Got a little crazy in the end. Keys is too principled to make that deal.

liked the hard boiled edge... plot twist was great. now want to see movie for sure I will

Love the story. Really enjoyed the voice of the narrator. The actual plan is wonderfully thought out.I would highly recommend this book.

The narration left a little to be desired, but this was a fun read nonetheless. Short and tense, with enough twists and turns to keep you on your toes. I need to go rewatch the film now.

James Naughton is perfect for Noir

Love this book, the story is clever and full of quotable lines...the film was excellent and James Naughton narration suits this genre.
Love it!!!