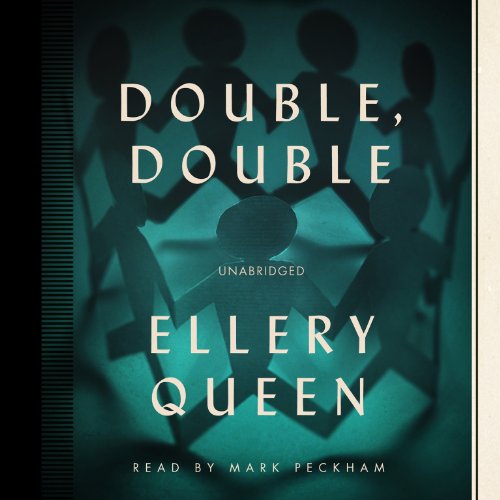 Ellery Queen returned to Wrightsville to solve the mystery of a rich man - believed poor - who died of "old age," a poor man - believed rich - who committed suicide, and a scholarly drunk who disappeared. Shortly it occurred to Queen that the puzzle had a pattern. A twisted mind was committing murder according to an old nursery rhyme! Doctor, lawyer, merchant, chief…and to at least one person in town, the chief was Ellery Queen.

This is a witty, fun mystery in the tradition of Agatha Christie's "Ten Little Indians." Sometimes the Queen mysteries can run on too long in revealing the villain, but this is just right. And Mark Peckham does an excellent job at narration. This is well worth your time and will make you smile at the witty text. Enjoy!

Not as fulfilling as other Queen novels

Compared to the many EQ choices, I don’t think this rates.
The narrator has a pleasant tone but otherwise is poor—he’s laconic and syncopated. He inserts pauses in many sentences where they don’t fit and has uneven cadence. The on/off clicking of the microphone is prominent. You may get used to it and speeding it up helps.

In different books, character Ellery has variable attraction to young women and variable rules of engagement. A great opportunity was set up here and then wasted. similarly, Rema’s character development started interestingly then lost dimension.
In whole, I think this work has some good dialogue passages and a pleasant setting but the plot seems to stall and drag in the middle and to have more obvious contrivances than the average EQ novel.

As far as an Ellery Queen story it was enjoyable & it was a better Wright-
sville story than the other novels. It didn't leave me with an angry unsett-
led uncomfortable feeling as the others unfortunately had.

Ellery Queen is an old school sleuth with shades of Sherlock Holmes & Lord Peter Whimsey. Excellent in every way possible