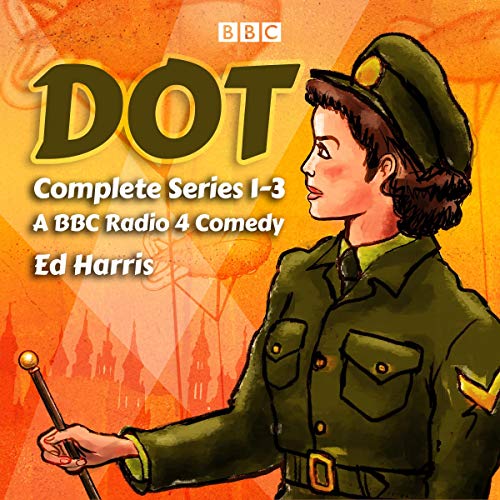 "Little chills the blood so much as the phrase ‘new Radio 4 comedy’. But, dear reader, be un-chilled...a lovely, period-mocking script delivered with its eyebrow at precisely the right level of archness." - (The Times)

"Dot’s quirky wit is all of her own." (The Observer)

A rollicking wartime comedy set in the personnel department of the Cabinet War Rooms, starring Fenella Woolgar as Dot.

Dot's had quite enough of making tea in the Cabinet War Rooms. When she finds a cryptic message in the newspaper she enlists the help of her gals - will this be the big break Dot's been waiting for?

Follow Dot as she gets squiffy over Agent Bertie Whiff-Whaff, concocts stirring yet pithy slogans for the war effort and goes on a mission to St Horribly Vulture’s School for Boys to enlist a teacher for...'shhhh...Bletchley Park!'

Dot will do her bally utmost for King and Country in these spiffing tales of derring-do (and, occasionally, derring-don’t), whether investigating suspicious deaths, outwitting dastardly spies or helping the Prime Minister with his French vocab.

Written by Ed Harris.
Produced and directed by Jessica Mitic (series 1 and 2) and Sasha Yevtushenko (series 3).

One of the few failures in my Audible selections. I gave up after 15 minutes, I couldn’t stand it any more. I’m sure there must be people who like this as there were 3 series but sadly not for me.

This is really poor, I tried to push through it hoping it’d get better but it doesn’t, I couldn’t even finish it before I returned it and I regret the time I spent on it.

It’s a mess of silliness and annoying voices with a story so poor I struggled to make sense of it. Terrible.

this series is well written, silly and good fun. Well paced and entertaining. the actors are also excellent

Excellent cast
Funny and intelligently scripted story lines
Very well written , with endearing characters
Excellent banter between the characters with hilarious 'put downs'
You WILL laugh out load ,so beware

This quirky well written play/book is hilariously funny, too many quality performances.

What a rollicking ride! I was devastated when I finished the series!! I just hope there will be a 4th series - the world needs more Dot!

Veers between the inspired and the utterly pathetic. But no criticism of the cast, who are uniformly brilliant.

Absolutely brilliant comedy!! Very well done and a good laugh. Great cast and would love to hear more if the BBC decide to do more

Love an acerbic wit?
Love your heroine to have a bit of a bite?
Love pithy one liners and a nod to the needs of the radio storytelling tropes?

I can not praise highly enough the story of Dot, helped and hindered by her War Room colleagues, as she tries her best to get ahead.

The storylines are fantastic, the actors superb and the sound effects outstanding. You will honestly laugh it loud as you listen (and hear something new as you listen again!).

Give it a listen, you won’t be disappointed!