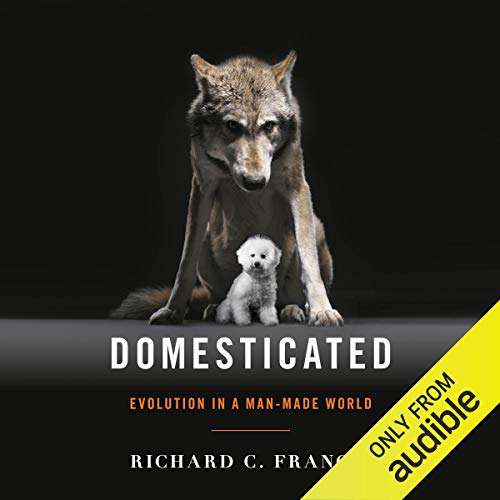 Without our domesticated plants and animals, human civilization as we know it would not exist.

We would still be living at subsistence level as hunter-gatherers if not for domestication. It is no accident that the cradle of civilization - the Middle East - is where sheep, goats, pigs, cattle, and cats commenced their fatefully intimate associations with humans.

Before the agricultural revolution, there were perhaps 10 million humans on Earth. Now there are more than seven billion of us. Our domesticated species have also thrived, in stark contrast to their wild ancestors. In a human-constructed environment - or manmade world - it pays to be domesticated.

Domestication is an evolutionary process first and foremost. What most distinguishes domesticated animals from their wild ancestors are genetic alterations resulting in tameness, the capacity to tolerate close human proximity. But selection for tameness often results in a host of seemingly unrelated by-products, including floppy ears, skeletal alterations, reduced aggression, increased sociality, and reduced brain size. It's a package deal known as the domestication syndrome.

Elements of the domestication syndrome can be found in every domesticated species - not only cats, dogs, pigs, sheep, cattle, and horses but also more recent human creations, such as domesticated camels, reindeer, and laboratory rats. That domestication results in this suite of changes in such a wide variety of mammals is a fascinating evolutionary story, one that sheds much light on the evolutionary process in general.

We humans, too, show signs of the domestication syndrome, which some believe was key to our evolutionary success. By this view human evolution parallels the evolution of dogs from wolves, in particular.

Fantastic exploration of man and nature

Domesticated explains how man domesticated animals and himself. The ideas are presented well and he drives home important points many ways so that they really get into your head. I've been excitedly telling people about the ideas of the book already and I suspect I'll end up buying a few copies of this. The chapter on camels and cats were particularly amazing and it's clear the author was both knowledgeable of and having fun with them.

Eric Martin was competent, a couple times the audio got choppy and the pauses at the ends of sentences got distractingly long. I listened at 1.5 speed and the reader was still very articulate. He certainly isn't dry and manages to emphasize points well.

The chapter on humans was fairly weak and I wish he had just skipped it and done birds or something. It falls into tight scientific arguments and wanders in uninteresting ways. Also watch out there is an appendix that is not that well labelled a the end (last 45 minutes).

I'd strongly recommend this book to any biology lovers, anyone who has wondered how domestication has changed animals, or where all the breeds of dogs cats and horses come from. It might be one of the better and more thorough biology books written in the past few years.

Science writing at its best!

I work in the meat industry, and learning the story of the animals that make my job possible was fascinating. I've never appreciated our barnyard companions so much. The finals chapters, asking the grandiose question, 'are humans domesticated?' brings up ideas and concepts that will stay with you for a very long time. This is definitely a scientific book that will leave your mind pondering new ideas for a while. I can't recommend enough.

What did you love best about Domesticated?

The description of the domestication processes of dogs and cats.

What was one of the most memorable moments of Domesticated?

The author's references to misguided "dog fancy" and "cat fancy" to create new breeds/"enhance" existing breeds to the point of making them unhealthy, prone to a slew of genetic diseases and deformities certainly stick in my mind.

Have you listened to any of Eric Martin’s other performances before? How does this one compare?

No, there was too much detailed biological and genomic information in it to have done so without being able to process the amount of information.

This book iterates and reiterates the morphological and behavioural differences between will and domestic forms of familiar animals. These differences are the same across the canine, feline, bovine, porcine, caprine and ovine species we know as wolf/dog, wild/housecat, ancient cattle/Elsie, wild boars/Porky, and their goat/sheep counterparts, as well as equines, rodents, and hominids. Even if one lacks a grounding in college entry-level biology or has forgotten Bio 101 and genetics, after a few chapters one can anticipate a common theme.

What did I like best about this story? Voicing the sometimes complex biological/genomic descriptions and suppositions regarding the development of morphological variation from the wild to the domestic forms of familiar species (and the book is truly all about the variation within species) protects this challenging material from dryness that could cause a lack of the reader's/listener's focus.

What does Eric Martin bring to the story that I wouldn’t experience if I just read the book?
I found the discussion about Sylvester and his sister amusing. In contrast, the discussion concerning how the dog and cat fancy have manipulated many breeds into ill health, chronic painful conditions and greater risk for mortality due to cancer is very distressing.

Did I have an extreme reaction to this book? Did it make you laugh or cry?
I detected a definite bias on the author's part in favour of goats as compared to sheep. I question the author's opinion that goats are smarter than sheep and that sheep are dim-witted. Such is contrary to recent articles published in several respected scientific journals (Audible will not permit me to post the links), and also to photos and videos posted by a number of shepherds I know on their blogsites. (They don't need to trim the lower branches of their trees in their fields, that's for sure!)

A key point underlying all of the author's comments is that the domestic versions of several of the animals about which he writes are the same species as their wild forebears - wolves can and do interbreed with dogs, felis domesticus can breed with f sylvaticus and produce fertile young, farm pigs can interbreed with wild. Thus, the author does not explain how Darwinian theory proves evolution from species to species. If a reader is seeking such an explanation, it is not here.

Well, what did you expect?

I bought this book mainly because I’m interested in the idea of how a formidable predator, a wolf, could gradually be transformed into the pathetic lovable modern domestic dog, in all its amazing different shapes, sizes and colours.

The book does provide this information. And then it goes on to discuss domesticated cats, sheep, cows, pigs, racoons, reindeer and so on, and on and on and on.

Parts of this were interesting, but other parts were challenging, in their use of some tricky genetic concepts. And of course it also became a bit repetitive, as the same domestication-related topics kept cropping up in relation to different species.

It’s not that he isn’t a good writer, or that it is badly narrated, neither of these are the case – but it’s significant that the two most interesting parts of the book were digressions – one was a discussion of the origins of the Santa Claus myth and the other was the author’s humorous description of a camel-ride he’d endured. These were telling, because they were evidence of a talented writer and perhaps this proved that this subject is just a bit too dry to provide the basis for a riveting listen, once you’ve heard how domestication happened in a couple of species.

It isn’t at all a bad book, IF you want to learn about the process of domestication in a WHOLE BUNCH of animals. I haven't given it a bad rating because the words on the cover describe perfectly accurately what the book is about – so what else did I expect?

I realize that most people would not find this topic fascinating, but wow, I really loved this book!

The author does a nice job of mixing technical science jargon in understandable terms for the general public. There is a nice mix of anthropology and genetics, talking about the interaction of human connection and biology.

What made the experience of listening to Domesticated the most enjoyable?

I really enjoyed the tidbits about each animal as they relate to the history of humanity. Some interesting points about human evolution were especially satisfying.

Would you recommend Domesticated to your friends? Why or why not?

Yes, However rather than an audio book, I would recommend a physical copy. The narration constantly referenced charts and pictures that I didn't have readily accessible and that I feel could have made parts of the especially hard science aspects of the book more understandable.

I found this book enjoyable but the more professional terms as well as hard science parts of the book went over my layman's understanding of genetics. Some people might find the repetition of connected facts to be arduous, but didn't bother me personally.

Great book, but the narrator sucks

The narrator reads every sentence in the same tone and it sounds like he is reading the most important headline of the book. over and over. it gets really annoying after awhile. the last word of every sentence he reads has this long twist which eventually turns into something you can not get over thinking about and it ruins this great book

Self-domesticating racoons? Not just a fascinating story about our favorite pets, this book explains what it may mean to find a racoon in your yard, or in my case, my dog's dinner bowl while camping. Did you know that there is not just one theory of evolution, as started by Darwin, but a whole series of sophisticated developments of that theory using modern evidence? This book combines up to the minute biological science with an objective comparison of differing theories of evolution, taking domestication processes as an accelerated subcase of evolution. It could be a dry book but it's not because it weaves in pre-history, history, social human systems and even personal stories just when your eyes get crossing over the technical terms. You must be tolerant of learning new scientific concepts but it doesn't expect that you already know them.

I actually found the several appendix chapters fascinating, especially the author's critical review of psychobiology theorists who seem to be ignoring much of the latest developments in the theory of evolution that don't fit their prior hypothesis. My extension of this critique (not mentioned by the author) is that this incomplete view has been latched onto by popular social movements, such as the Paleo diet, founded on outmoded assertions about how long it takes for human dietary adaptation to occur. Any hypothesis that starts with the assumption that we haven't changed since paleolithic days is now going in the category of pseudoscience in my view.

The book itself is unlike most popular science books I've seen. It's a thorough and somewhat technical survey of the state of knowledge on its subject matter without repeating a sensationalistic "unifying" messages.

I though it was límites to dos and wolves but it goles de experiencia into the evolutivo of diferentes specialized, incluido gratis humanos. Very interesting book.