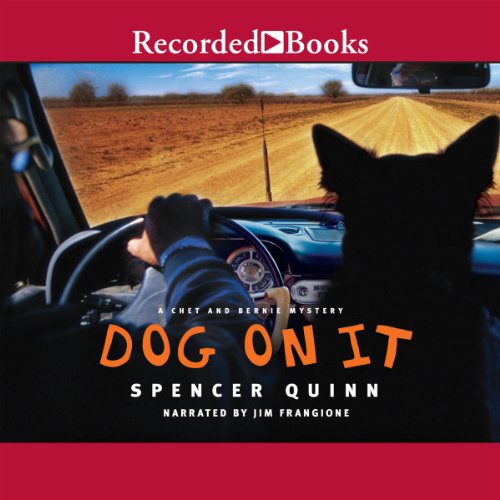 "Dog on It has got more going for it than 50 of those cat cozies ... My sincere advice to you is to rush to your nearest bookstore and put your paws on this enchanting, one-of-a-kind novel." (Stephen King)

Meet Chet, the wise and lovable canine narrator of Dog on It, who works alongside Bernie, a down-on-his-luck private investigator. Chet might have flunked out of police school ("I'd been the best leaper in K-9 class, which had led to all the trouble in a way I couldn't remember exactly, although blood was involved"), but he's a detective through and through.

In this, their first adventure, Chet and Bernie investigate the disappearance of Madison, a teenage girl who may or may not have been kidnapped, but who has definitely gotten mixed up with some very unsavory characters. A well-behaved, gifted student, she didn't arrive home after school and her divorced mother is frantic. Bernie is quick to take the case -- something about a cash flow problem that Chet's not all that clear about -- and he's relieved, if vaguely suspicious, when Madison turns up unharmed with a story that doesn't add up. But when she disappears for a second time in a week, Bernie and Chet aren't taking any chances; they launch a full-blown investigation. Without a ransom demand, they're not convinced it's a kidnapping, but they are sure of one thing: something smells funny.

Their search for clues takes them into the desert to biker bars and other exotic locals, with Chet's highly trained nose leading the way. Both Chet and Bernie bring their own special skills to the hunt, one that puts each of them in peril. But even as the bad guys try to turn the tables, this duo is nothing if not resourceful, and the result is an uncommonly satisfying adventure.

With his doggy ways and his endearingly hardboiled voice, Chet is full of heart and occasionally prone to mischief. He is intensely loyal to Bernie, who, though distracted by issues that Chet has difficulty understanding -- like divorce, child custody, and other peculiar human concerns -- is enormously likable himself, in his flawed, all-too-human way.

In my opinion, this book captures the essence of what we love about dogs. I don't have a dog, but I've been around many of them and I enjoy their different personalities and antics. Jim Frangione,the narrator of this recorded book, makes this enjoyable tale about a dog and his master a real delight. Spencer Quinn,the author, writes convincingly as Chet the Dog, but Frangione really brings him to life. I laughed out loud many times. Highly recommended.

A fun listen with an interesting twist on the typical detective novel. OK, it's no Arthur Conan Doyle, but there are some twists and turns that keep it interesting. But what makes the story is the narrator, Chet. I share my home with a pack of "his guys", as Chet would say, and he seems like one of my big goofy ones ("Oops, was that me barking?") I wish I knew what my dogs were thinking sometimes, and with Chet's stream-of-consciousness thought process and memories that come and go, he seems like a pretty good approximation. A good "tail" for long drives and long distance running.

As a dog lover I truly enjoyed this book - - the narration from the dog's perspective was so funny! Enjoyed it immensely - I think I liked it in audio more than I would have if I had read it - the narrator was great!

you will love this book. very fun and a great little who done it story-line. highly recommend.

This book is great fun. I could hardly put it down.

If you're a Dog lover and you like Detective stories, you will love this book. The story is told with the Dog as Narrator, and he does a wonderful job. The Author has mixed humor with action, and it works. Very entertaining.

What a fun listen! Never would I have thought that a book narrated by a dog could be so much fun . . . but I thoroughly enjoyed it . . . a kidnapped girl, Bernie and his dog, Chet . . .

Being a dog person I really really enjoyed this book! I just got it, hard to explain. Story was great too. Would love to read another one.

I enjoyed this book tremendously. I am going to play it in the car for our long, long ride this vacation. I think this is the kind of book that adults and children can have fun listening to and will definitely fuel some good discussions. I just hope the two dogs in the car will enjoy our laughter too.

A clever and creative mystery from a canine perspective. A nice, but not too sweet, story just begging for a sequel!