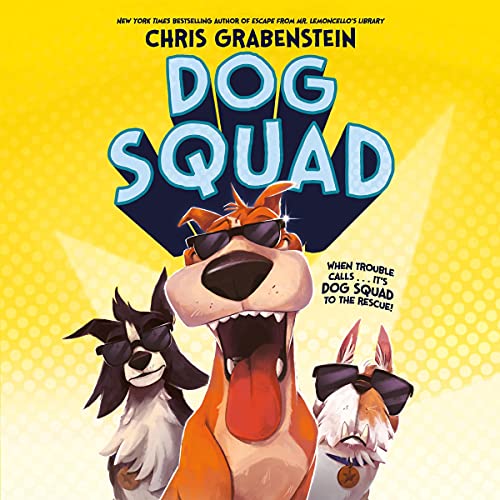 "In frequent ink-and-fill scenes (not seen in finished form), Hughes depicts the courageous canine in action from various dramatic angles. Grabenstein bills his 'wags-to-riches' tale as a series kickoff, but notwithstanding a broad hint about the next episode, this stands all four paws firmly on its own.” (Booklist)

“Laced with positive messages but never preachy, this allegorical, fast-paced, rollicking adventure will appeal to all readers.... This canine adventure shows what it means to be brave.” (School Library Journal)

When trouble calls...it's Dog Squad to the rescue!

Duke is not your average dog. Along with his crew, he fights crime and goes on claw-biting adventures helping dogs in peril in the hit streaming sensation - Dog Squad! Fred is a pretty average dog. He's scrappy. He's loveable. But he's not brave like his heroes on Dog Squad.

Fred looks an awful lot like Duke from Dog Squad, though. In fact, when Duke needs a stand-in, Fred's the perfect choice. But the Dog Squad action doesn't always stop on screen! When there's danger in real life, can Fred find the courage to step up and save the day?

This is the bes

As an author, it's wonderful when you hear an audio book done exactly the way you heard it in your head. Hopefully, this will be a fun summer listen for many family car trips!