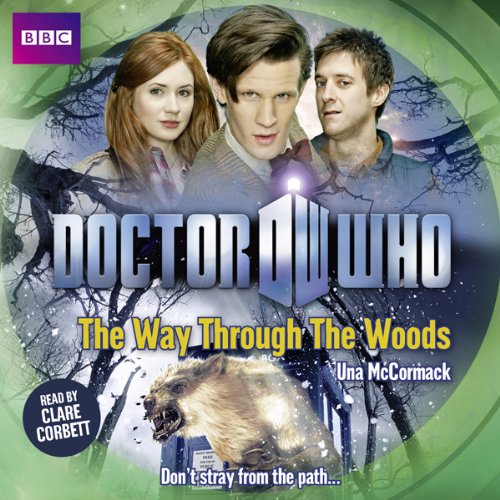 England, today. Between the housing estate and the motorway lies an ancient wood. The motorway bends to avoid it. Last week, teenager Laura Brown went missing. Tonight, Vicky Caine will miss her bus and take a shortcut through the wood. And she will disappear too. England, 1917.

Between the village and the main road lies an ancient wood. The old Roman road bends to avoid it. Tonight Emily Bostock and a man called Rory Williams will go to the woods. Investigating events in the present day and back in 1917, the Doctor and Amy are desperate to find out what’s happened to Rory. He was supposed to look after Emily - and now they’ve both vanished. Something is waiting in the woods. Something that’s been there for thousands of years. Something that is now waking up...A thrilling, all-new adventure featuring the Doctor, Amy and Rory, as played by Matt Smith, Karen Gillan and Arthur Darvill in the spectacular hit series from BBC Television.

Doctor Who: The Way through the Woodsに寄せられたリスナーの声

A mystery that keeps you riveted till the end .

What made the experience of listening to Doctor Who: The Way through the Woods the most enjoyable?

What was one of the most memorable moments of Doctor Who: The Way through the Woods?

I enjoyed the beginning with Rory when he goes back in time to meet Emily Bostock and their trip into the woods despite Rory's best endeavours to keep them clear of the woods Emily soon wrecks that well planned intention. I found it good to see a strong female character of that era portrayed and could see Emily in her time being a companion as she has no fear and is quite calm and brave.

She also had strong views on supporting conscientious objectors in the war and was willing to stand up to the older men in the village to defend Rory who the locals give a hard time by giving him a white feather which Rory did not really understand the purpose of at first. As we near the end of the story this was obviously another touching and memorable moment as we arrive closer to finding out what the mystery of the woods is. Your heart strings are pulled and you feel anger, sadness and happiness in the end, even though some people can never go back to their lives but make a decision to make the most of their lot and prepare to explore the unknown.

I think all of the above were favourites scenarios of mine.

Yes I was eager to keep reading not wanting to stop at all because I was consumed with curiosity to see what was going to happen next.

Not really just that I loved the book and would recommend it to anyone to read even if you don't normally read Doctor Who but like a little mystery and suspense then you will enjoy this book.

I've listened to some 20+ DW books in the past few months and I have to say this one may be my absolute favorite.

I almost cried when I heard it was narrated by Claire Corbett. I suppose I could've saved myself the trouble by listening to the sample, but I just wanted everything narrated by Meera Syal. Claire Corbett isn't bad, but she doesn't have much variety in her voices. She does your base British accent, a lower guy's voice, and an average Scottish/Irish accent, but it got old fairly quickly.

Took a while to get into this story. About an hour before I really cared about what was going on, and almost two hours before I was finally pulled into the story. If you get to that point you should have no problem getting through the rest of it, and it did end nicely, with some cute Amy/Rory moments, if you only read these books for those (which I may or may not). Otherwise, it's not one of the best ones.

Great audio book but expected Meera Syal narrating and it is Clare Corbett.

Beautifully narrated by Clare Corbett as indicated by the image of the book cover and not narrated by Meera Syal as listed in the details.

This threw me at the beginning because I chose it expecting Meera Syal and I was wondering why she was doing a posh middle-class RP accent in an unexpectedly higher voice than her usual velvety tones for quite a while instead of enjoying the book undistracted.

Once I finally twigged what was going on I settled into it and Clare Corbett is an excellent choice for this story. She is good at Rory and Amy and all the other characters work well too. She deserves to be properly credited in details. Overall a good solid enjoyable Who adventure. Well written and presented. Nicely creepy at the beginning.

The Way through the Woods - Dr Who at its best!

Oh what a wonderful yarn! A fabulous story, superbly read by Meera Syal. One could think of this as countless faerie stories from childhood rolled into one. Definitely a starring role for Amy in this one, with some very interesting supporting characters. And an interesting twist in the, rather foxy, tale! Fantastic!

McCormack uses folklore tropes- animal headed men, stolen people, roads that lead to faerie land, within the scifi of Doctor Who to create a inventive and convincing addition to the history of Amy, Rory and the Doctor. Gives a lovely sense of mystery to those wooded areas near towns and motorways that grow in darkness just beyond the streetlights.