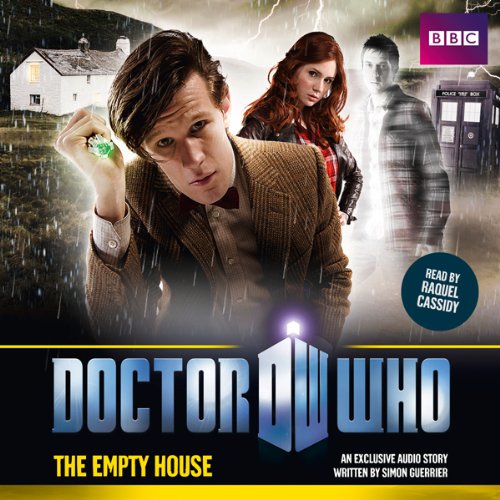 Doctor Who: The Empty House

Thrown off course by a howling storm, the TARDIS lands in a bleak, desolate stretch of countryside. The Doctor deduces that it has arrived in Hampshire in the 1920s and, sniffing the air, he smells a distinct odour of sulphur - indicating that a spaceship has crashed in the area. While Rory goes to fetch an umbrella, Amy and the Doctor brave the rain to find the stricken craft. It is huge, shiny, silvery-blue - and completely empty. A set of footprints leads to a cosy-looking, old-fashioned cottage: but the house, too, is deserted. However, the Doctor and Amy can distinctly hear people talking - and one of the voices sounds like Rory's.

How could he be in the cottage when he was last seen heading back to the TARDIS? Where are the residents of the empty house? And what has happened to the inhabitants of the spaceship?

Doctor Who: The Empty HouseŃü½Õ»äŃüøŃéēŃéīŃü¤Ńā¬Ńé╣ŃāŖŃā╝Ńü«ÕŻ░

Too good but too short

It is hard to decide if I got my money's worth. I love Dr. Who and enjoyed this audiobook but it just seemed too short. It was like having an audible episode of Doctor Who, wrapped up in an hour or so. I'm not sure if I really cared for the background sounds but overall the narrator did a pretty good job.

I saw the plot twist coming from the beginning--but the Doctor and Amy were well done.

Would you ever listen to anything by Simon Guerrier again?

Yes--he understand the characters but could use a more complicated plot--though this is a very short book. Really just an hour episode.

What does Raquel Cassidy bring to the story that you wouldnŌĆÖt experience if you just read the book?

She does a great job with all the characters.

Was Doctor Who: The Empty House worth the listening time?

Yes--not my favorite but good.

What disappointed you about Doctor Who: The Empty House?

Truly a zero of a story. Revolving around the characters being on different planes and a forced sense of urgency with no threat. Good performance with no story.

Has Doctor Who: The Empty House turned you off from other books in this genre?

No, not everything can be gold, I appreciate other quality books all the more.

No one scene stands out

If you could play editor, what scene or scenes would you have cut from Doctor Who: The Empty House?

Not cut, added a creature in their bubble to add a sense of danger.

I would spend credits on alternate Dr WHO books, this would be a last resort

It started out good

I would change the "twist."

I think that having a different reason for the house being "empty" would have make the story more enjoyable. I wanted to be wowed.

What aspect of Raquel CassidyŌĆÖs performance would you have changed?

I think she did I fine job.

It was alright but it didn't have that "ooh" moment where there's a twist and you are astonished, excited, and pleased.