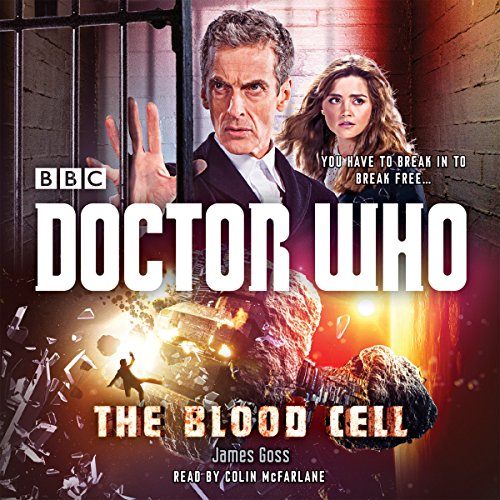 An unabridged reading of the new novel by James Goss featuring the Twelfth Doctor, as played by Peter Capaldi in the hit BBCTV series Doctor Who.

An asteroid in the furthest reaches of space - the most secure prison for the most dangerous of criminals. The governor is responsible for the cruellest murderers, so he’s not impressed by the arrival of the man they’re calling the most dangerous criminal in the quadrant. Or, as he prefers to be known, the Doctor.

But when the new prisoner immediately sets about trying to escape, and keeps trying, the governor sets out to find out why.

Who is the Doctor, and what’s he really doing here? And who is the young woman who comes every day to visit him, only to be turned away by the guards?When the killing finally starts, the governor begins to get his answers....

A complete and unabridged reading by Colin McFarlane, who was the Voice of the Heavenly Host in the TV episode "Voyage of the Damned".

Doctor Who: The Blood Cellに寄せられたリスナーの声

This was a great listen. Both author and narrator captured the Doctor brilliantly. I wasn't a huge fan of the narrator's voice for Clara, but it wasn't too bad. The POV character is the Doctor's jailer, which as you can imagine is an incredibly frustrating position. One of the better Doctor stories I've read/listened to.

A great story and an even better narrator.

I hope I get to hear more Dr Who stories narrated by Colin McFarlane. He did a great job with the different voices and held your attention.

I actually liked this story and the reader was adequate. Although I personally found the choice to write the story in the first person viewpoint of character who was neither a companion or the Doctor to be rather odd and it did have a slight negative effect on my ability to really enjoy the story as I prefer the third person style that most Doctor stories are written in.

First this was mostly dictated by one character making it not that interesting. Weird format, would not recommend. The story was not well written.

I loved it, love 12 (not crazy about Clara but she didn't dominate thank goodness)!! Looking for 12 and and Bill though. I'll throw you *all* the money..BILL! BILL!! BILL!!!!

One of the best Doctor Who Novels I have ever had the pleasure of listening to!

This was a fantastic Dr. who story. loved it from start to finish. buy it

A worthy addition to the mythos

Great performance, fun story, interesting POV for the story that added quite a bit too the tone. The characters were spot on and Clara is my favorite companion now.

I enjoyed the storyline, the narration was outstanding and the twelfth Doctor rocks of course.

Cleaver story and engaging performance by Colin McFarlane. He captures the 12th Doctor very well indeed that you can almost imagine Peter Capaldi standing in the recording booth with him.
James Goss has also captured the characteristics of the twelfth very well. I enjoyed it enough to say I've listened to it a few times now.

Would have worked well on TV

James Goss really gets the tone and wit for Peter Capaldi’s Doctor. This would have worked well as a TV story.

The story never flags and, bar the gruesome ending, could have been a good TV episode given the contained setting.

Especially enjoyable is that the author has captured Clara's quirkiness and the Drs irritable nature well with some great dialogue; their 'toe' chat is pure comedy gold that would have worked well on TV, and the Drs diatribe against committees is the best TV speech he never gave.

Doctor Who: The Blood Cell Review

I loved this audio book and I wanted more like this in the future.
By Orkneyislands

A good story with many interesting twists, I would recommend it to an adventure lover with a taste of adventure