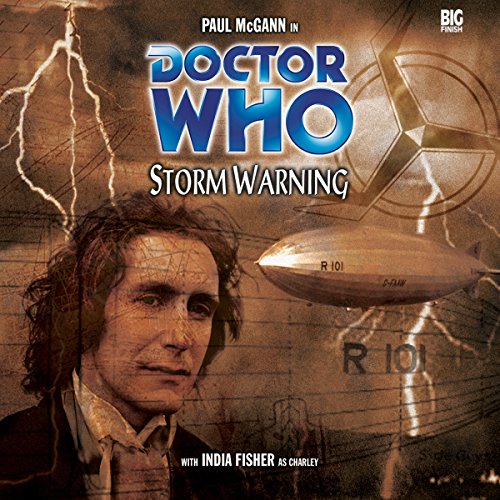 October 1930. His Majesty's airship, the R101, sets off on her maiden voyage to the farthest-flung reaches of the British Empire, carrying the brightest lights of the imperial fleet. Carrying the hopes and dreams of a breathless nation. Not to mention a ruthless spy with a top-secret mission, a mysterious passenger who appears nowhere on the crew list, a would-be adventuress destined for the Singapore Hilton...and a Time Lord from the planet Gallifrey.

There's a storm coming. There's something unspeakable, something with wings, crawling across the stern. Thousands of feet high in the blackening sky, the crew of the R101 brace themselves. When the storm breaks, their lives won't be all that's at stake.... The future of the galaxy will be hanging by a thread.

Would you consider the audio edition of Doctor Who - Storm Warning to be better than the print version?

I am not aware of any print version of this story, but I would not be interested in reading it if there was. That would only bring me the author's talents alone. The audio brings me the talents of everyone else involved, too.

What other book might you compare Doctor Who - Storm Warning to and why?

I'm still a newbie to the Eighth Doctor adventures, so I cannot make any comparisons just yet.

I think my favorite scene has to be when the Doctor identifies himself as Johann Shmidt, a German spy. Any Whovian can tell you that John Smith is the Doctor's go-to alias.

I listened to it all in one sitting.

McGann was born to play the Doctor. And Storm Warning is everything a proper Doctor Who adventure ought to be.

finally an adventure for the 8th Doctor.
long needed.
glad to have it in the collection. will add another Paul M.!

a very strong start to 8.

really enjoyed, some little nit picks but nothing that really detracts from an otherwise strong story

this is a great story for those that are only just getting into big finish!

It's good to hear a solid Who story featuring Paul McGann, showing that he was and still is a far better Doctor than the 1990s movie script allowed him to be.

While the introduction of Charlie isn't quite as strong an entrance, India Fisher does still provide a great first impression for what would be the start of an important story arc for her character.